The problem with “collateral damage” in a “surgical air-strike” 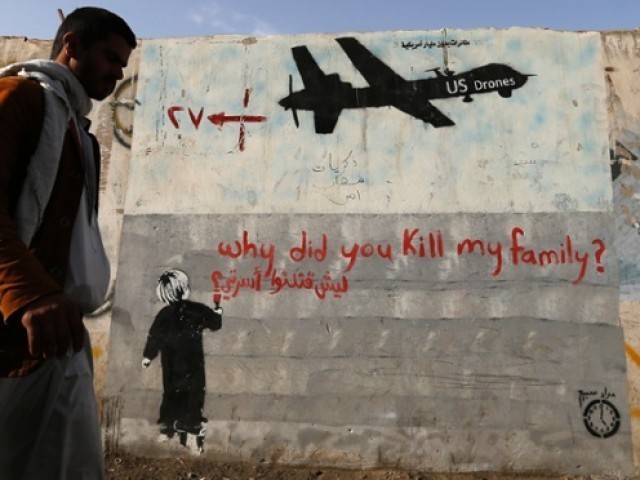 It is about time that the US let go of its double standards or stop exerting hegemony in the field of human rights. PHOTO: REUTERS

The questioning gaze of that drone victim, who lost one of his family members – with eight others injured – on the fateful day of October 24, 2012, in a drone strike at South Waziristan, still haunts my memory every time a new strike occurs.

Just today, four more people were killed in North Waziristan; they too shall be termed as “collateral damage” of a “precise air-strike” against “terrorists” hiding in the “safe havens”, and forgotten or not even talked about as individual human beings in the first place.

When will this loss of innocent human life stop?

Who will make the American government accountable for this tyranny?

Who will answer the questions of this Waziri victim who asks that if Malala was a victim of an attack by the Taliban on October 9, 2012, then Nabila too was a victim of American aggression, which manifested itself on October 24 – so why then was the latter not even acknowledged or recognised while the former emerged as a global icon?

Yes, I agree that each story is different and no sacrifice can be belittled in comparison to another, but can the victims be expected to understand this? Is it possible or reasonable to expect them to embrace the logic, if any, of ‘collateral damage’?

A recent article published by The Guardian revealed that 41 men were targeted but 1,147 were killed in Pakistan during a drone strike; the same article discussed how the US killed 128 people, 13 of them children, just to hunt down one Qari Hussein of the TTP. How can the US think that killing 128 people for a single, alleged terrorist is acceptable? The logic befuddles me.

This calls into question the accuracy of these strikes that the American government claims, while terming them as being “clinical” or “precise”. What about the loss of human life from “signature” strikes, when someone is targeted for their pattern of behaviour? In some instances, people have even been killed for mistaken identity, either for having the same name or a similar description.

There have been instances of multiple strikes on the same occasion to confirm elimination of targets. Furthermore there is no transparent and effective media reporting with sources on both sides of the issue, having incentives to manipulate the data for strategic and political reasons. The use of local intelligence is very common, often tainted with tribal prejudices and inaccuracies.

The question of the legality of drones comes into play as there is a judgment by the Peshawar High Court where the chief justice, Dost Mohammad Khan, ruled that drone strikes were illegal, inhumane and a violation of the UN Charter of Human Rights. The court said the strikes must be declared a war crime.

“Where the position of the government of Pakistan is quite clear: It does not consent to the use of drones by the United States on its territory and it considers this to be a violation of Pakistan’s sovereignty and territorial integrity. As a matter of international law, the US drone campaign in Pakistan is … being conducted without the consent of the elected representatives of the people or the legitimate government of the state.”

There are statements from American officials raising doubts over different issues concerning the drone war, even if not its legality per se. For instance, former US Ambassador to Pakistan, Cameroon Muntor once said,

“The use of drones is a good way to fight the war. But you’re going to kill drones if you’re not using them judiciously.”

The CIA director John Brennan has, in the past, questioned whether “the Obama administration was overstepping its bounds by launching drone strikes, including usage against American citizens, without any congressional or judicial oversight”. He further asserted, while defending the program, that the Obama administration could ensure further transparency as to the civilian deaths in drone strikes.

So the entire argument boils down to one question – how can the Obama administration call these strikes ‘precise’ when only four percent of drone victims in Pakistan are al Qaeda operatives, as per the findings of the Bureau of Investigative Journalism?

How can such a significant number of civilian deaths, including children, be termed as collateral damage of a “precise, targeted, surgical strike”?

How can pushing a button and then shutting one’s eyes to the resultant loss of human life win a greater war? Who will compensate the victims and how will they be rehabilitated?

Who will provide education to the many Malalas who were not attacked by the Taliban, but were displaced and injured as a result of these aerial strikes?

It is about time the US lets go of its double standards or stops exerting hegemony in the field of human rights. They have no right to bash Russia over the Ukranian conflict, when history is replete of instances where the US blatantly violated international norms and fundamental rights. The US happens to be the only developed Western country that has not ratified the Convention on the Rights of the Child (CRC) or the Women’s Convention.

Torture of detainees and operation of prison cells like at Guantanamo, under the infamous rendition policy, is yet another massive usurpation of human rights. The use of the death penalty is not yet abolished and the US doesn’t accept the jurisdiction of the International Criminal Court for trail of war criminals. The world is witness to how the US went ahead with the Iraq invasion of 2003, completely ignoring the UN resolution against it and in breach of international law, on the pretext of controlling the spread and use of “weapons of mass destruction” which were never found.

Many innocent lives have been lost under the smoke screens of “war against terrorism” and “self-defence” while no humanitarian intervention has been made in Rwanda or places where genocides took place – they probably seem to be strategically insignificant countries. The US needs to contain its greedy control and selfish world policies before, as a consequence, they have to reap what they themselves have sown.