The kinds of people you will definitely encounter at Sunday Bazaar! 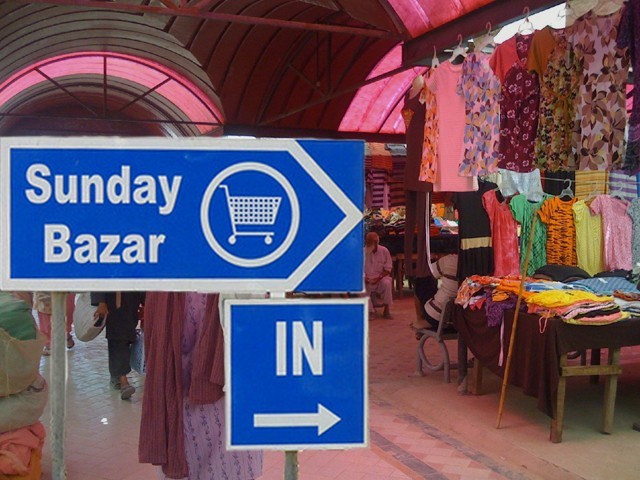 Considering that Sunday Bazaar is a one-stop shop, it is obvious that it would be frequented by all and sundry.

For those of you who are not from Karachi, Pakistan, and who do not know what Sunday Bazaar is, it is a huge open thrift market in the posh locality of Defence Phase 8. You will find anything and everything – bolts of luxurious fabrics, original oil paintings, fruits and vegetables, wicker baskets, leather jackets, second-hand books of all genres, used shoes and bags, disposed-off toys and electronics among many other things my brain refuses to do an inventory for.

Essentially, it is a wholesale-cum-flea market which takes place on, you guessed it, Sundays only. And for those of you living in Karachi who don’t know what Sunday Bazaar is, what rock are you living under?

So considering that Sunday Bazaar is a one-stop shop, it is obvious that it would be frequented by all and sundry. But keeping in mind the strange dynamics of this city, ‘all and sundry’ becomes a lot more entertaining than you would expect, especially the interaction, or lack thereof, between those visiting the bazaar. Here is a glimpse into the wide variety of our species I have encountered there.

Karachi is a melting pot of different cultures and ethnicities, the proverbial ‘greener pasture’ that people from all over the country come to settle in. Hence, it should come as no surprise when you see flocks of shuttlecock-burqa-clad Pukhtun females descend like a blue cloud upon the stalls and begin conversing in rapid-fire Pushto with the mostly Pukhtun vendors.

On the very next stall, you will probably come across a small family of 15 from Hub, Balochistan, who have hired a Bedford truck for their trip to this shoppers’ paradise. They provide a colourful backdrop for the Sindhi clan in their mirrored frocks and scores of children, as they peruse the shiny, “gawldun” (golden) jewellery for the next wedding in the tribe. There is absolutely no shortage of our tribal brethren in this vast space where all of Pakistan seems united for once.

For the entertainment-starved people here, there are days when a ray of hope shines upon them in the form of a grimy person covered in the Phase 8 dust, who happens to be famous for some reason or another. Sunday Bazaar is one place you are most likely to come across your favourite TV actor strutting about in designer sunglasses (which you will spot two streets away at a corner stall) and, seeing your star-struck expression, will pause in front of you expectantly waiting for you to ask for their autograph. You will probably also get a glimpse of a famous singer haggling with the fruitwala in a not-so-melodic voice, and probably an actress who dared to step outside her house with, wait for it, no makeup at all! Imagine the horror of seeing her as a normal human being!

There is a special breed of homo sapiens who have a strange affinity for the written word, and you will find them bent over rows upon rows of books at the bookstalls in Sunday Bazaar, studiously ignoring the cacophony of human voices that surrounds them as they withdraw into their book-bound bubble. These people come in all shapes and sizes, belonging to all ages, and chances are that if you saw them in the morning when you entered the bazaar, you will probably find them at the same shop when you leave three hours later; the only difference now being the presence of a plastic bag full of treasures they unearthed during their long and exhaustive search.

Just by the way, I also happen to belong to this category!

It is not hard to find this haggard family as the fathers portray Jason Statham-like driving skills, manoeuvring baby strollers through narrow alleys carrying sweaty toddlers dripping ice cream in their wake. The mothers, on the other hand, pacify cranky babies with every form of rattling bling-bling they can gather at the junk corner. More often than not, the baby boomers seem to be on a mission to come, conquer and leave as soon as possible, before the baby poops and they have no way of changing their diaper in this desert wasteland, so to speak. It is very rare that you see a quiet family of this kind and when you do, you wonder if the zombie apocalypse has arrived because it just seems so unreal.

As you near the footwear area, you find yourself surrounded by complete teams of kitted out teenagers in heated discussions over Nike versus Adidas, studs versus no studs, green versus black and so on and so forth, extolling the virtues of their favourite player wearing so and so shoes. Sometimes you will find a lone adolescent boy stubbornly pointing at his favourite pair of Nikes while his mother continues to lecture him on the vice of overspending whilst trying at the same, unsuccessfully, to convince him to buy a cheap China-made copy which the vendor swears comes from the same Nike factory.

The early bird gets the worm, and the first to arrive at the bazaar are those who look to sweep the arena clear of the bounties it has to offer. You will probably not even find these scavengers after noon because they were the ones who helped the sellers unpack their wares during the early hours, while simultaneously setting aside everything they find worth a dime. If you have been wondering why you never find the good stuff, chances are that the good stuff is now the property of these hawks and it will never see the light of the sun again… ever.

These are the stereotypical Burger aunties who seemed to have somehow teleported from their drawing rooms straight into the midst of this “durrtyoOld peasant village” in their expensive lawn suits, sleeveless tops, capris and perfect manicures and blow dry. These ladies also happen to be very active at those stalls that sell *cough* fake *cough* designer handbags, which they intend to flaunt at the next kitty party when they explain how difficult it was to obtain this last item from Louis Vitton’s Fall/Winter collection on their recent trip to Italy.

They will be seen conversing in English with the shopkeeper who will look at them admirably and answer right back in Urdu, and somehow a transaction will eventually take place while you remain lost in translation. If you ask them though, they will most likely look very confused as to how they came to be in this place, telling you in their most earnest voice that it is their very first time coming to Sunday Bazaar only because it is so close to their palace on 26th street and they suddenly found themselves free this unfortunate Sunday.

These are typically the children of the above mentioned aunties, who went abroad for higher studies after A-levels. They turn up at the bazaar in tank tops, shorts, flip flops and bandanas. They stroll about the bazaar likening it to the flea-markets they visited on their road trip across the States. Looking over at the mass of humanity they will hold a social dialogue among themselves, in their most native American accents might I add, on issues plaguing the Third World which the American President’s latest reforms will most definitely solve, of course. You might even find them clicking away on their DSLRs capturing the ‘true face of Pakistan’ while they go about telling each other not to touch anything simply because ‘germs bro’.

The “actual” farangis who have come here for the first time belong to all races and nationalities; the tanned Americans/Europeans still carrying their backpacks around, the Russians and Ukrainians who are sometimes mistaken for our Pukhtun brothers, the Africans often wrongly accused of participating in the Lyari warfare and the Orientals who seem to always be in a hurry to get to the next stall. If they are smart, they will escape the claws of the vendors who heap bags upon bags of “vairry chheep” things ‘Made in Pakistan’, turning their stalls into souvenir shops making the foreigners wonder how anybody thought things are affordable here.

If during your journey through the maze of Sunday Bazaar, you come across young men whistling, humming, singing the latest Bollywood songs, swaggering in tight jeans in unthinkable eye-popping colours, wearing sunglasses with the stickers still on, and hair gelled back very, very carefully, then you behold what we call the ‘kewl byoiz’. They truly believe they are the perfect substitutes of Zayn Malik or Fawad Khan, with just the right amount of star quality.

Their female counterparts are the heavily made-up, high heeled, blinged-out, fancy dressed ‘kewl gurlz’ who treat the potholed streets as their modelling ramp, throwing Kareena Kapoor inspired hair flips left, right and centre. They fully believe they have the filmi husn (movie-like beauty) and hoshruba ada (star-like attitude) that will score the ‘kewl byoiz’s’ affections. They will also, quite promptly, break the shiny, little man-child hearts when they shift their attention to the used spiked and long leather boots which they intend on pairing with their denim-patterned tights and diamante-studded ruffled tops. Because really, who has a better fashion sense than them, hain jaanu?

Last but not the least, the natives of the bazaar itself; the shopkeepers who make their livelihoods based on the whims of the buyers, the vendors whose disposition varies as much as the dwarves who Snow White lived with. Then there are the mazdoors (workers), from toddlers to adults, running after you with their woven baskets, asking (read: insisting) you need a porter to carry all your shopping for you. Sometimes, you will have three of them fighting over who gets to carry your onions and tomatoes. Not quite what you dreamt of when you thought about all those eligible bachelors competing for your affections but you snap out of your reverie when you realise they are fighting for a right to the measly wage of perhaps Rs20, a small denomination note whose absence you never noticed until it started resembling the Rs5000 note. They add another depth to the characters you meet in this giant labyrinth you navigate through.

This, of course, is my own experience at our beloved Sunday Bazaar, and I have only listed the most memorable types of people I have seen there, obviously not covering “all” those who visit. Now that Sunday is upon us, I am off to get myself another stack of novels at a bargain now. What kinds of people have you come across at Sunday Bazaar – I am sure we can swap notes!

A thoroughbred IBA graduate hoping to put marketing MBA to use to fund interest in literature, science, travel, art and food. She tweets @noreenqayam (twitter.com/noreenqayam)