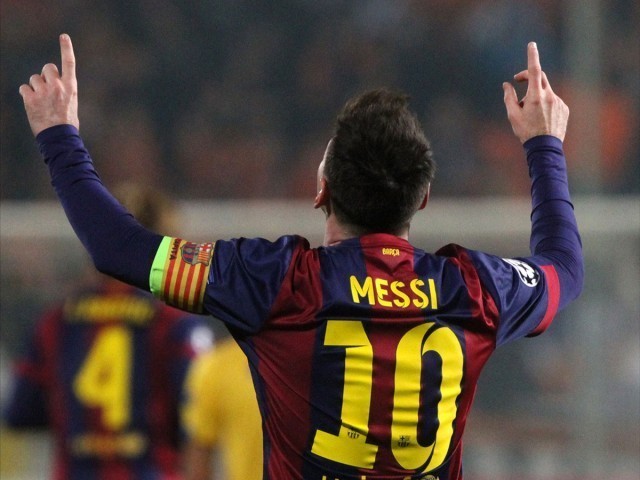 It seems almost superlative now to add to the tally of articles and tributes that have rained down on the diminutive Argentinian since last Saturday. However, acknowledging the unlikelihood that any of us will witness the level of skill, precision and magic that he has brought to us in our generation again, I suppose ‘enough’ could never be said.

In a week dominated by headlines that Lionel Messi, despite his contract tying him to Barcelona till 2019, was “unhappy” with the club, he went back to doing what he does best against an excellent Sevilla outfit. He scored a hatrick; displaying each of the attributes previously alluded to. Then just a few days later, he took on lowly Apoel in the Champions League and smashed Raul’s record with yet another hatrick.

His appetite seems almost insatiable; matched only by his ‘arch nemesis’ Cristiano Ronaldo. And therein lies the romp. It seems almost by design that the world was blessed with both of these prodigious talents. To this day, the argument rages between Pele and Maradona. Long after both have hung up their boots the world is yet to decide on who was the greatest of them all. Messi and Ronaldo may have both been granted entry into the pantheon of football greatness but only Messi stands a chance of breaking into what has been a VIP club of two for decades.

Before the Ronaldo fans lose all semblance of common sense at this statement, let me explain. Greatness is a largely subjective term. The best there ever was should not be. It is a formula that equates stats to an individual. Simple as that.

It’s important to note that Messi battles two demons on the path to true greatness. The first is Maradonna; a shadow that still looms over the maestro whenever he dons the national team colours. A demon he can vanquish forever by winning a World Cup with Argentina.

This will be no easy task.

Most would argue his best chance came and went in the World Cup final of 2014. Yet he has one last chance. Should he achieve the improbable then not only will he be held in higher regard than Maradonna but will forever vanquish the ghost that trails him in Ronaldo. For all his marvellous traits, the lack of a quality national team will forever render Ronaldo impotent in this regard.

However, even with a World Cup winner’s medal to his name, Pele scored more goals at club level and won an absurd three World Cups. Messi would need more than his skill to match that. A time-machine does not seem to be in the offing. At best he can retire as the second-best player on the planet.

Yet, just take a moment, if you missed the Sevilla and Apoel game, and go back and watch the highlights. Do it whether you’re a fan of his or not. Because there might not be another like him for decades to come. Because years from now we can tell our children, we lived in that era. We saw him perform every week. We were witnesses, rooted on our seats, in a theatre of footballing brilliance that is Lionel Messi.

And for now, while the La Liga scoring record may be beyond him, as far as the Champions League goes, over to you Ronaldo.