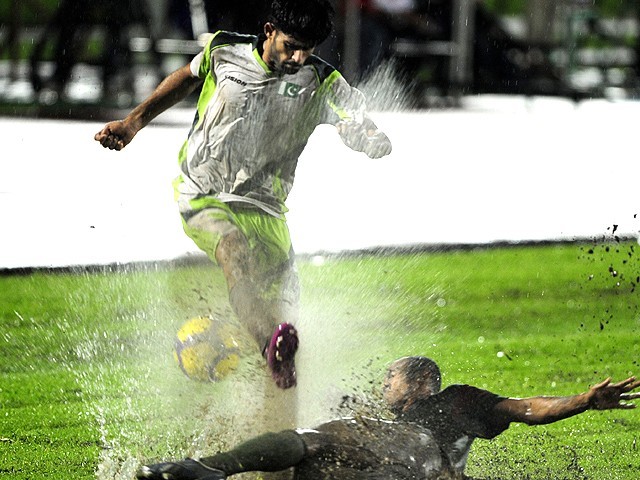 With the AFC Challenge Cup no longer taking place, Pakistan will not have any other opportunity to play competitive football for four more years, until the World Cup qualifiers in 2019. PHOTO: AFP

Fédération Internationale de Football Association’s (FIFA) method to calculate rankings has had its fair share of praise and criticism over the years, with many calling it inconsistent, while others enjoy the benefits with smaller teams making great leaps with famous wins. However, for minnows like Pakistan, the rankings are truly reflective of the team’s state of affairs.

I usually don’t pay much attention to rankings but, nonetheless, it plays a key part when one is in a constant battle to promote the game and raise awareness amongst masses. And it’s no surprise that the eventual mention of Pakistan’s ranking often brings ridicule and disappointment.

These rankings are based on points gained from playing competitive and friendly matches; the higher ranked team you beat, the more points you collect on monthly rankings which have 208 nations currently led by world champion Germany. For Pakistan, ranked 182nd in the latest FIFA rankings is no surprise. It is a team that often goes a full year without playing a single international friendly match and sometimes only participates in competitive matches such as the 2007 World Cup qualifiers. They went through 2010 without a single senior match and played just one international friendly in 2012. Subsequently, the rankings are bound to take a hit.

The team, however, has been active this year playing seven more matches. But as an Under-23 team with the same squad playing as the ‘senior’ lot due to the new policies of Bahraini coach, Shamlan Mubarak, who decided to do away with the senior players except one, Mohammad Ahmed, based at home and abroad. It is no surprise that he has managed to win just two matches, against a rather weak Sri Lanka and India, both U-23. The federation’s inability to run two separate teams has been exposed once again having failed to learn from previous years when the focus was entirely shifted from the senior team to prepare the U-23s and U-22s for their respective qualifiers. All this meant that the national senior team had less playing time together and in the end, failed to make it to the Asian Football Confederation (AFC) Challenge Cup’s final round or progress out of the South Asian Football Federation Women (SAFF) Championship group.

In the first half of 2007, the Pakistan U-23 team played the Olympic qualifiers with the senior team not taking the field for a good 10 months until the World Cup qualifiers against Iraq, which Pakistan lost 7-0 on aggregate (7-0 and 0-0). The lack of action meant Pakistan went from 162 in October 2006 to 181 by the time it played Iraq in October 2007. This was evident in 2012 again when the team went from 174 in December 2011 to 189 by January 2013 because it had only played one match in the whole of 2012. Low rankings mean lower seeding when it comes to draws of tournaments on the continent and Pakistan has paid the price for it in the past by getting some real heavyweight opponents and going in unprepared.

Why the sudden importance on ranking, one would ask?

The answer is simple – there is lot depending on it.

In 2015, Pakistan will once again take to the field just like more than 200 other nations with dreams of qualifying for the World Cup, but for Pakistan, and other Asian countries, it also has the Asian Cup 2019 qualification linked to it.

In April this year, the AFC introduced a new format for the World Cup qualifiers for the 2018 tournament and the 2019 Asian Cup. AFC qualifiers will begin with bottom 12 ranked teams playing a two legged play-off round before the teams are trimmed down to 40 into eight groups where the big boys of Asian football join in. Up until May, Pakistan was ranked above the bottom 12 in Asia and was in position for an automatic group entry, meaning it would get at least eight matches (four home, four away) to have a go at during the World Cup qualifiers and the Asian Cup qualifiers which, under the new format, has been expanded to 24 teams to offer eight more slots and a much more interesting qualifying system. The eight-group winner and four best runner ups for the World Cup qualifying for the second round will qualify for the Asian Cup, whilst the next best 24 teams would get into six groups of four and play a further six matches (three home, three away) to determine entry into the continental event with the top two from each group qualifying.

So it comes back to the point when the federation and its Bahraini coach decide to plan for the future and give exposure to young players at the expense of the ‘senior’ team.

How much further into the future were they looking, because these qualifiers do really mean Pakistan’s football activity over the next three to four years?

Especially with the AFC Challenge Cup no longer taking place, Pakistan will not have any other opportunity to play competitive football for four more years, until the World Cup qualifiers in 2019. That leaves Pakistan with just two SAFF Championships in 2015 and 2017, in which the Shaheens have failed to clear the group stages in the last four events.

So why am I worried about the pre-qualifier round?

Because with the current situation that the team is in, it would be difficult to beat a fellow minnow and the fact the Pakistan hasn’t won a World Cup qualifier in 28 years or scored a goal in over a decade should give you an idea of the situation we are in.

There is still enough time to get a few international friendlies during the winter and on FIFA week in March, but for that, the coach must put Pakistan first and his ‘developmental’ ideology second. After all, his deal will run out a couple of months after the qualifiers, but we will be left with no football for four years and nearing the 200 mark in the FIFA rankings.

Do watch out for the Pakistan Football Federation’s response in justifying a 182 FIFA ranking as something to take pride, blaming it all on how bad the rankings were under the previous administration. Yes, Pakistan saw its lowest ranking under the previous regime but it also saw its highest. The fact that Pakistan has failed to go beyond 152 in over a decade tells of the sorry state the national team is in and the quality at its disposal.