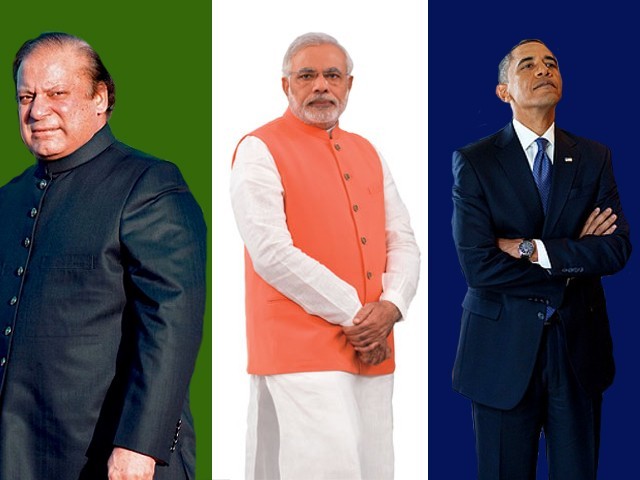 It would have been great had Obama’s Air Force One landed in Pakistan. It’s an opportunity lost.

Ever wondered why Pakistan is made to play a second fiddle role when it comes to US handling South Asian affairs? It’s only been a few months since Narendra Modi took office as India’s prime minister but he’s already captured the imagination of the West. He’s treated like a superstar wherever he goes. His visit to the US back in September this year was a tremendous success. He created a superb rapport with US President Barack Obama and his administration, and won admirers all over the US.

Obama is now scheduled to pay a visit to India and attend the Indian Republic Day celebrations in January. However, he’s not visiting Pakistan. Given the delicate geo-strategic balance in the region, it seems rather odd that a US president would go all the way to India but give a cold shoulder to the neighbouring country that has and continues to play a pivotal role in the war against terror.

Granted that India is by all accounts a global techno-economic power and the largest democracy in the world, Pakistan’s inability to ‘sell’ itself appropriately and get the attention it truly deserves is nothing but a diplomatic downfall. Since 2001, each successive government in Islamabad as well as the army leadership have stood by the US, supported its effort to end terrorism and now that the president has planned a trip to the area but Pakistan’s been given a woeful thumbs down treatment.

Apparently the Pakistani prime minister and Obama spoke over the phone recently whereby the president took Nawaz Sharif into confidence regarding his visit to India and assured him that he would ‘undertake a visit to Pakistan at an early date as soon as the situation normalised in the country’.

I’m personally at a loss to understand the validity of this argument.

What does normalisation imply?

Is there an apprehension about the president’s security in Pakistan?

Are the threats not the same everywhere?

The president, after all, is the world’s most protected head of state. He has a comprehensive security detail, one that is tried and tested and is essentially unflappable.

Back in March 2000, I remember how during the worst days of US-Pakistan relationship, post-nuclear test time, President Clinton was able to make a brief touchdown in Islamabad after a state visit to India. He appeared on national TV to address the people of Pakistan, at least ensuring that the US had not completely side-tracked Islamabad.

An Obama visit to Pakistan would have had a healthy impact not only with respect to US-Pakistan relations but also on the overall political scenario in South Asia. The US has repeatedly encouraged India and Pakistan to resolve their geopolitical disputes mutually which is a fair expectation. However, Washington’s interests in the region are of much greater importance to be just regarded as a mere keen observer. A stable South Asia is the key to ensuring that US economic, strategic and political interests are well looked after. America needs continuous cooperation from India and Pakistan on account of its own national interests.

While that reality is undeniable, there is this nagging feeling amongst South Asia watchers in Washington that Pakistan overplays the significance of the Kashmir issue and tries to involve the US rather unnecessarily. And the same exact thing happened during the Obama-Sharif phone conversation – the prime minister urged the president to take up the Kashmir issue with the Indian leadership to guarantee enduring peace in the area. That phone call could have been used as an opportunity rather than a tantrum-throwing skit.

The world is changing and a lot has happened since the UN passed the Kashmir resolution back in the 1940s. While one is not undermining the importance of an issue that can be regarded as the paramount pillar of the Pakistani foreign policy paradigm, there’s plenty more that policy makers in Islamabad can ponder over to readjust priorities that are suited to modern-day realities. There’s so much to talk about with India, probe into the possibilities of cooperation, look into options that can bring the two countries and their people together.

Why can Pakistan not leverage the awe-inspiring tools of diplomacy that can shape up a well-rounded policy vis-à-vis New Delhi?

Why not step out of the box and show the world that Pakistan is creative enough to think about proposing measures that can enable deescalating tensions in the area?

Pakistan can learn a lesson or two from India’s post-1980s strategy. New Delhi’s change of emphasis from a closed, socialist model to an open market economy, stress on exports and technological advancement turned around the country’s fortunes in the past two decades or so. While India has moved on and is now recognised as one of strongest growing global economies, Islamabad is still grappling with the problem of religious extremism and age-old redundant issues.

In light of the lively changes that India made that includes the export of their entertainment industry, the country’s phenomenal success model is something that Pakistan can implement in its own backyard. The main idea is to make the country appealing, more marketable to the world outside. At the time when Pakistan is suffering and reeling under the pressure of religious extremism, such measures are direly needed.

For instance, one often comes across Mahatma Gandhi being portrayed as the symbol of peace and non-violence. He is known the world over for his philosophy, practices and principles. How did this all come about? Whereas it undisputable that Gandhi ji was a genuine, peace-loving figure who believed in a humanitarian worldview, a lot of credit for maintaining such an image goes to the Indian people who decades after his assassination still spread his teachings and ideas to the global audience.

What about Pakistan? Has anyone marketed Mohammad Ali Jinnah as a secular leader who changed the course of South Asian history and single-handedly fought for independence from the British when the odds were heavily weighed against him? Gandhi’s statue proudly stands outside the Indian embassy in Washington.

How about doing the same for Jinnah?

One senses a disconnection in the Pakistani foreign policy setup. For the life of me, I cannot expect the prime minister to be the foreign minister as well. Nawaz is way too naïve and uptight for the job. He lacks the finesse and the confidence that is a critical prerequisite for being successful in the role. Chief advisor to the prime minister, Mr Sartaj Aziz is an economist by trade that makes him perfectly suitable to run country’s economy but not the foreign policy. Understood that it is essentially the bureaucracy that runs the show and hence, a lot depends on foreign missions abroad and the foreign secretary to look after the business of diplomacy. That begs the question – is the ambassador to the US active enough to grab on to the opportunities with respect to relationship building? He’s a career diplomat – he should know how to transform half chances into positive prospects.

All said and done, it would have been great had Obama’s Air Force One landed in Pakistan. It’s an opportunity lost. In this traumatically hectic and aggressive international environment, nations interested in making progress need to be on their toes and act at the spur of the moment. Plus, presentation and delivery make a remarkable difference. Pakistani foreign policy managers need to wake up and smell the coffee. The great Muhammad Ali used to say,

That’s exactly how successful countries operate these days. The laidback ones are left behind the pack to get trampled upon and crushed. A speedily structured rational and pragmatic approach to global affairs now will bear fruit for future Pakistani generations. There is no quick fix. The dance of diplomacy is one difficult art to master. However, it’s not impossible to perform. What matters in the end is the commitment and appetite to make a positive change.