After Ajmal, Hafeez takes a hit – will Pakistan be able to bounce back? 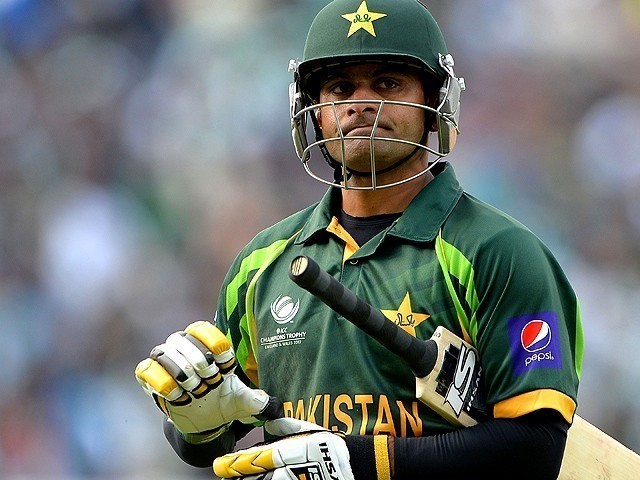 For long stretches, when his batting has let him down, it has been his bowling that has ensured his place in the team. PHOTO: AFP

And so the ICC’s purge against off-spinners continues, with Mohammad Hafeez being the latest victim. It has come as no surprise given the recent suspensions of off-spinners globally and the warning Hafeez himself received when he was reported during the Champions League T20 in September with Hafeez due to be tested at Loughborough on November 24, 2014.

In fact, the Pakistan Cricket Board (PCB) itself has been pro-active in this matter, forming a five-member committee which included ICC Elite Panel Umpire Aleem Dar and Pakistan’s spin bowling coach, Mushtaq Ahmad, to weed out suspect actions before they reach the international stage. However, the news of Hafeez being reported comes as a huge blow to Pakistan, especially in the wake of Saeed Ajmal’s suspension and the bleak outlook on his return to the team.

Our bowling attack over the last five years has been based on our spinners, and Hafeez and Ajmal formed two thirds of the triumvirate (third being Shahid Afridi) largely responsible for winning games for us that the batting side seemed intent on losing. However, with the World Cup 2015 fast approaching, we are left in a perilous position where only one of the three is available. Yet Hafeez’s position may not be as desperate as that of Ajmal’s.

While Ajmal had 30-35 deliveries reported and results eventually showed his average elbow extension to be twice the limit, Hafeez only had a mere four deliveries reported during the first Test versus New Zealand. And while Ajmal is an unorthodox spinner, Hafeez is a relatively straight-forward off-spinner.

On the flip side, other orthodox spinners such as Kane Williamson have also been suspended from bowling and Hafeez’s argument of “nothing is different from what I have been bowling in the last 11 years” will not stick since this is an unprecedented clampdown on bowling actions; after all, even Ajmal was cleared back in 2009. Moreover, since Hafeez possesses no variations, it is his regular off-spin that has been called into question. So unlike Marlon Samuels, who only had his quicker delivery banned, if Hafeez is found to exceed the limit then he will be banned from bowling altogether.

There were some in the cricketing circle, such as Wasim Akram, who suggested after Hafeez’s action was reported during the Champions League that we should preserve him for the World Cup due to his worth as an all-rounder in the ODI team. However, just as he denied there was anything wrong with his technique after being badly exposed by Dale Steyn, Hafeez dismissed suspicions about his action maintaining it had remained the same throughout his career and participated in the recent Test series against Australia and New Zealand.

Perhaps it would have been more prudent for Pakistan to take a leaf out of West Indies’s books, when they withdrew Sunil Narine from their tour of India to work on his action after he had also been reported during the Champions League. Such valuable time could have been used to work on Hafeez’s action and ensure his participation in the World Cup as an all-rounder. It seems it was a risk that was clearly not worth taking if it results in his suspension. If anything, it was a surprise he wasn’t reported during the Australia series and that’s a statement not on Hafeez’s action but on the movement to eradicate off-spin from the game.

Despite his brilliant performance in the first Test against New Zealand, there will always be those who question Hafeez’s place in the Test team – a format where specialists are more in demand – but it is a fool’s errand to question his place in the ODI and T20 teams. Hafeez is second in the ICC rankings for ODI all-rounders, and first in T20s. All-rounders like Hafeez are a priceless commodity in ODI cricket – they can bat at the top of the order and bowl their full quota of 10 overs if required and they also allow the captain to play an extra batsman if needed.

Simply speaking, Hafeez is a captain’s dream in ODI cricket and should he be banned from bowling, it will completely disrupt the balance of our ODI team heading into the World Cup. While Ajmal could be replaced by another spinner (albeit not by one as good), Pakistan simply does not have any other all-rounders to provide the balance Hafeez does in ODI cricket.

In his interview before departing for his tests in Loughborough, Hafeez told reporters how he considered himself a batsman, not an off-spinner, and never rated his own bowling. Although this maybe a defence mechanism in the event he is only able to participate as a batsman, it seems a bit strange that Hafeez does not rate his own bowling when he is seventh in the ICC Bowlers Rankings in ODIs. In fact, were it not for his bowling, Hafeez may not have thrived or even lasted these last four years in international cricket.

For long stretches, when his batting has let him down, it has been his bowling that has ensured his place in the team. Should the unthinkable happen and he gets suspended from bowling, serious questions will need to be asked about Hafeez’s place in the team for the World Cup. Plenty of decent techniques have been exposed in Australia before and Hafeez’s is suspect to say the least. His inclusion as a specialist batsman would mean Pakistan would be devoid of a sixth bowler and/or a batsman light.

Barely a year on from surrendering the T20 captaincy, Hafeez could lose his place in the World Cup team and Pakistan’s World Cup hopes will be scuppered before they even begin. The importance of November, 24 cannot be overstated.