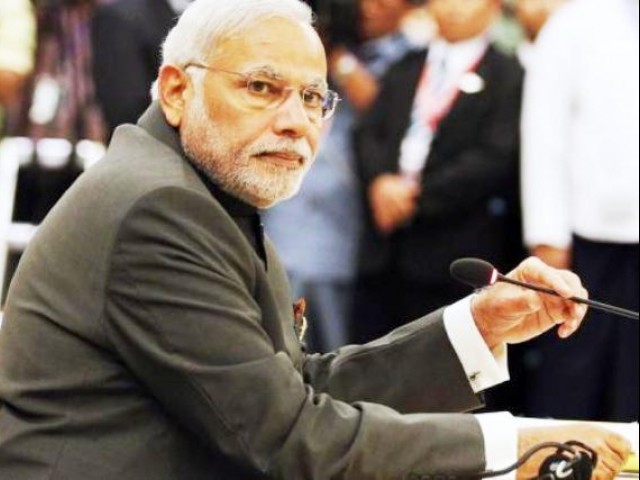 BJP is hoping for a huge success of the election boycott campaign announced by the pro-freedom and resistance forces in Kashmir valley so that not many people come out to cast their votes PHOTO: REUTERS

While riding high on the Modi wave, the Hindu nationalist Bharatiya Janata Party (BJP) swept the 2014 Indian general elections (parliamentary and Lok Sabha polls) and formed a stable government in New Delhi. But quite amusingly, the saffron brigade has now set its aggressive eyes on ‘Mission Kashmir’.

Not only does the party intend to secure victory in improbable 44 assembly segments out of a total of 87, it also has a plan to install a Hindu chief minister in Muslim-dominated Jammu and Kashmir. The five-phased assembly elections in the disputed Himalayan region are scheduled to commence from November 25, 2014.

Just weeks after the devastating floods hit the Kashmir Valley on September 7th, BJP unveiled its over-ambitious plan to win 44 assembly segments in Indian-administered Jammu and Kashmir. With all guns blazing, the right-wing BJP is busy with the over passionate election campaign. The party refers to its plan for Jammu and Kashmir as Mission 44 through full page newspaper advertisements and messages on various media, including social media.

So, what exactly is this ‘Mission 44’? And how can BJP translate its political reverie into reality?

Mission 44 is all about securing at least 44 assembly constituencies – a magical number required to form a government in an 87-member strong Jammu and Kashmir legislative assembly. The grand plan includes reliance on mass scale voting in the Jammu province and the Buddhist-majority Ladakh region, and an election boycott in the Muslim-majority restive Kashmir valley. Amit Shah, Prime Minister Narendra Modi’s right hand man and also BJP president, has on several occasions expressed his party’s desire to form a BJP-led majority government in Jammu and Kashmir.

Mr Shah visited Jammu on November 20th and 21st with a possible intention to polarise votes in the region. He appeared confident that his party would bag more than 44 assembly seats, while his speeches focused on issues like corruption, and ending dynastic rule of the Congress, National Conference and Peoples Democratic Party (PDP). He claimed that there was “overwhelming response” in BJP’s favour in all three regions of disputed Indian-administered Jammu and Kashmir. He launched BJP’s election campaign and addressed a rally at Ramban.

So how realistic is this mission?

In the 87-member legislative assembly, Kashmir valley accounts for 46 seats. It is, therefore, almost next to impossible for BJP to win even a single assembly constituency in Kashmir.

The party has a vicious plan though. It is hoping for a huge success of the election boycott campaign announced by the pro-freedom and resistance forces in Kashmir valley so that not many people come out to cast their votes, which gives BJP an outside chance to win a couple of seats in Kashmir by ensuring that the majority stays indoors but the migrant Kashmiri Pandits cast every single vote in its favour. Most of the Pandit voters (migrants) will cast their vote in 26 special polling stations made available in Jammu, Udhampur and New Delhi.

However, not every Kashmiri Pandit is a BJP fan.

Sanjay Saraf, who is contesting in the elections from the Habba Kadal constituency as the Lok Jan Shakti party candidate, castigates the “divisive” politics of BJP. He says,

“BJP, in order to grab power, is playing dirty politics. In Jammu, BJP wants mass voting while in Kashmir it wants to ensure that majority of the people boycott the polls.”

Meanwhile, BJP has fielded a Kashmiri Pandit businessman named Moti Kaul, from the Habba Kadal constituency, a radical named Ashok Bhat from Khanyar, Dr Hina Bhat from the important Amira Kadal constituency, and Daraksha Andrabi from Sonwar. All four of these constituencies fall in Srinagar. They have also gotten hold of Tral, an assembly segment in South Kashmir, with Sardar Avtar Singh as its representative.

Pro-freedom and anti-India sentiment run deep in Tral, a hotbed of active and former militants, Sopore, a bastion of resistance leader Syed Ali Shah Geelani, alongside most of the assembly segments falling in the summer capital of Srinagar. According to the estimates, there are about 92,000 migrant Kashmiri voters across the Kashmir valley. Thus, BJP is trying every trick in the book to lure these voters in its favour.

But what is BJP’s mantra? What promises have the BJP leaders made to the people of Jammu and Kashmir?

On November 19, the former BJP President and currently the Federal Home Minister of India, Rajnath Singh, addressed an election rally in the mountainous region of Kishtwar in Jammu, and declared Article 370 a “national issue”. This Article explains Jammu and Kashmir’s conditional and controversially constitutional relationship with the Indian Union and also the region’s special status.

BJP wants to abrogate Article 370 with an aim to fully merge Jammu and Kashmir with India. According to Singh, the party is not interested in addressing this issue during election season. In what could well be described as an attention grabbing sound bite, BJP’s candidate from Amira Kadal, Dr Bhat threatened to pick up the gun, AK-47 rifle, if Article 370 was revoked by her party.

Interestingly though, BJP’s State Vice President, Ramesh Arora, claimed that Islam will prosper under the saffron party’s rule in Jammu and Kashmir. He passed a statement to the local media, saying,

“Kashmiris need to vote en masse for the Bharatiya Janata Party. This contention is misplaced that BJP is a communal party. Kashmir is a land of Sufi saints. Islam will only prosper in our regime.”

In the last assembly elections held in 2008, the Jammu and Kashmir National Conference (JKN) emerged as the single largest party winning 28 seats, while PDP won 21 and stood second, and the Indian National Congress (INC) emerged triumphant in 17 assembly segments while BJP settled for 11 seats. The rest of the assembly constituencies were won by the Jammu and Kashmir National Panthers Party (JKNPP), the Communist Party of India – Marxist (CPM), the People’s Democratic Front (PDF), and independent candidates. The JKN and the Indian National Conference were successful in forming a coalition government as Omar Abdullah became the chief minister in early 2009.

As more than 1.5 million people were directly or indirectly affected by the massive September floods, the worst in Kashmir’s living memory, it was assumed that the assembly elections would be postponed to allow a smooth relief and rehabilitation process of the flood victims. That, however, did not happen. Instead, a team of the Election Commission of India (ECI) headed by Deputy Election Commissioner, Vinod Zutshi, visited Jammu and Kashmir on October 7th to meet various representatives of different pro-Indian political parties in Jammu and Kashmir to review the post-flood situation. A decision was taken to conduct Jammu and Kashmir assembly polls in a phased manner, beginning November 25th.

Ironically though, the government postponed the annual examinations of all primary, middle and higher secondary classes until March next year, citing the devastation of infrastructure caused by the floods as the main reason.

All said and done, there are not even bleak chances for the BJP’s Lotus to bloom in the Kashmir valley – alcove of Sufi saints.