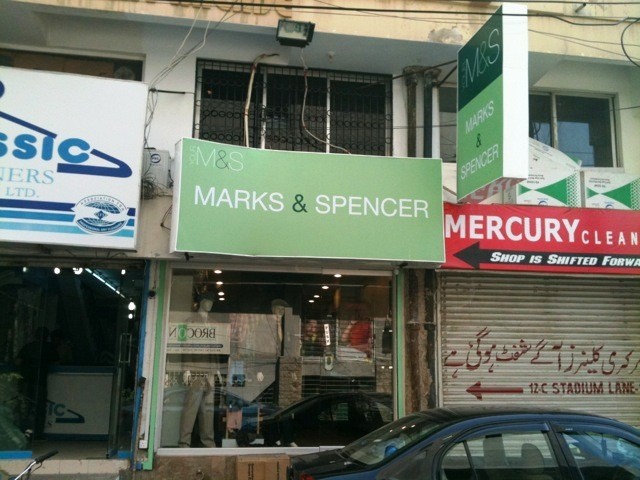 It feels like only yesterday that I was thousands of miles away from the heat, commotion and chaos that is part of life in Karachi. I was living in London pursuing graduate studies. During my time in the British capital, I came to discover that there is more to the city than history, sightseeing and its reputation as the party and entertainment capital of the world. It is also a city known for its spectacular high street shopping.

Most of my friends would say shopping is not a man’s thing, but wait till you move to London and see all that the city has to offer. All that is enough to turn even the most resilient of men into a shopaholic. Yes, even men can have shopaholic tendencies, especially if one is living in a city that offers great high street shopping. Even for men’s clothing, London, particularly Oxford Street, has it all.

No trip to the famous Oxford Street of central London is complete without a trip to Marks and Spencer, which is today one of the oldest continuously operating high street retailers in the United Kingdom. From its humble beginnings as a partnership between Michael Marks and Thomas Spencer in 1894, it has gone onto become the most recognisable retail brands internationally, with over 800 stores in over 40 countries. For those loyal to this brand, the opinion is that they give their customers quality worth every penny, and it is that very quality which results in a visit to one of their stores overseas, whether it be in Dubai, Hong Kong and even Kuala Lumpur.

Fans of the brand in Karachi who have been longing for the opportunity to visit one of their stores and purchase quality clothing one need not travel very far. Fairly recently, Marks and Spencer opened its doors in Karachi, with a small clothing retail shop in Khadda Market in DHA, Karachi.

Upon enquiry from the sales staff within, I came to learn that it was a franchise store and it has only been a few days since they opened their doors. It was certainly a treat for the eyes to see one of my favourite retailers with a presence in my hometown. It brought back fond memories of my days in London, as well as provided me the opportunity to experience the quality in men’s clothing I have grown accustomed to. Their prices are marginally higher than what their UK stores have to offer, in the bracket of about 15-20 per cent, but then again, with the exception of the Hong Kong store, Marks and Spencer has been relatively pricier at its international stores than in Great Britain.

The DHA store managed to have a reasonable collection of men’s clothing and accessories in their very modest outlet, from casual and formal dress shirts, to undergarments to silk ties, cuff links and belts. Bad news for the ladies though: this outlet only caters to men’s clothing at the moment. Only time will tell whether they manage to attract the niche segment of the market in Karachi that they have targeted and whether they will expand their offerings to include women and children’s clothing as well. For now, I am just going to hop into my car and drive on to their Khadda Market store and do me some shopping!