Is Sea View a dangerous place? 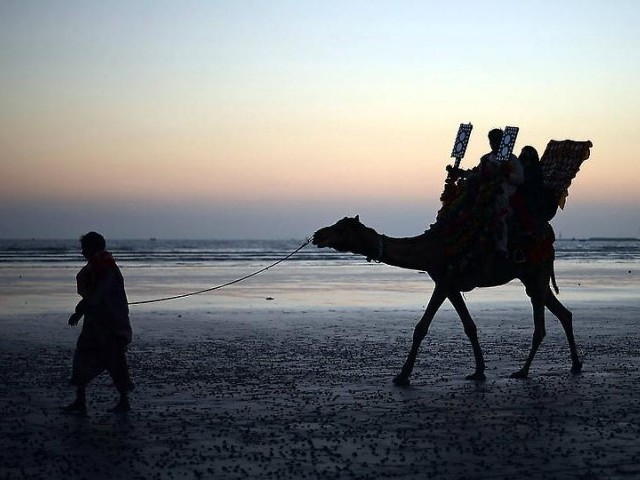 Relieved to finally be done with our university exams, Asad, my best friend from university, suggested he and I decided visit Abdullah Shah Ghazi’s shrine during our vacations. Since I had plenty of time to spare, I agreed and the two of us decided to go on Saturday early in the morning to avoid any rush.

At 8am on Saturday, Asad came over and together we left, on my motorbike, for the shrine. After offering our fateha, we realised thatit was still relatively early and we didn’t have anything is specific planned out. S on our way down the stairs of the shrine, Asad said it was a nice day to go to the beach. The thought of the relaxing sea breeze and quiet waves was very enticing. Since we were already so close to Sea View, I agreed.

Since it was still earlier in the day, the sun was not very strong and a cool breeze welcomed us near the water. We walked on the beach for a while, in silence, taking in the beauty that surrounded us. It was the perfect morning.

After a few minutes, we were approached by two young boys – roughly around eight or nine-years-old – inquiring about whether we were interested in taking a horseback ride.

Funnily enough, the boys were not accompanied by horses. I let out a confused laugh and Asad inquired,

“Beta, where is this horse that you’re asking us to ride?”

At this, one of the boys shouted something in a high-pitched voice and two horses came running towards us, and stopped near them. We were really in no mood to ride a horse at first but the children insisted so much that we gave in. They told us that one round was Rs10. We agreed and got atop the horses.

The ride was fantastic. The cold wind blowing in our faces was very refreshing and we enjoyed ourselves thoroughly. After 15minutes or so, I told Asad that I had had my fill and was planning to get off the horse. He, too, was tired by now and we decided it was time to head home, but when we told the children to stop, they refused to listen. They pleaded for us to take another round and convinced us to take another round. The breeze was so nice that we agreed and stayed atop for another 20minutes. At the end of that, when we asked them to let us down, they refused to let us off the horses. At this point, alarm bells started going off in a remote part of my brain. I insisted, but to no avail.

When we did finally manage to get off the horses is when things went unimaginably wrong. We took out Rs10 each and handed it over to the kids. At the sight of the money, however, the demeanour of the children and their attitude towards us changed completely. They threw the money on the floor and started yelling at us about how the amount to ride the horse was Rs840 each, and that we owed them Rs1680! My jaw fell to the floor,

“What rubbish are you talking? We were supposed to pay you Rs10 each, as agreed earlier. Why are you asking for such a high amount now?”

Asad asked the children to pick up the money but they refused, still arguing that we owed them RS1680. Thoroughly agitated, Asad picked up the money from the ground and we started making our way to my motorbike.

Suddenly, a man – in his early 20s – came out of nowhere and grabbed Asad’s collar. He punched him in the neck and Asad fell to the ground. Since it was early in the morning, the beach was relatively empty. The only people present were corn-vendors and camel drivers; none of whom came to our aid. We felt completely trapped.

I felt my throat going dry while we tried to explain to the man that the agreed amount was Rs10 per horse ride. It was unfair to demand a higher price after we had gotten off the horses, and we were not going to pay. A small crowd of vendors etc started gathering around us; I felt like we were being cornered. We did not dare to make any sudden moves to avoid further aggravating the situation. The man who hit Asad started searching our pockets. He found Rs1500, put the money in his pocket and shoved us away. That money was all we had for the month and so I tried convincing him that we would be willing to pay Rs100 each, but that much was entirely unjustified. Instead of hearing us out and negotiating, the man threatened us of ‘dire consequences’ if we didn’t ‘keep our mouths shut’ and leave the area that instant. By now I had had enough. We did not agree to such a long ride in the first place and I refused to be bullied a second time. Furious enough, I decided that I was willing to put up a fight, but Asad pulled me towards the bike and said things may get out of hand, and that we should just leave.

Looking around us I realised that there was no point fighting a losing battle and getting hurt in the process, Asad was right, and so we decided to leave.

When we were getting onto my bike, I heard a roar of laughter behind me. The entire crowd was bursting with hilarity, while the two children gave us smug looks. That was the last straw. I explain to Asad how this was not on and we could not just let them get away with robbing us like this!

At this point, with no other viable option left, I decided to call the police. Although I knew that the police in Karachi was notorious and asking them for help may result in more trouble. But I just felt like it was the right thing to do. I took out my cellphone and dialled 15. I explained the entire situation to the operator on the helpline. He inquired whether the man who robbed us was still present at the beach. Still staring at the crowd, agitation boiling through my veins, I told him that he was still very much present at the beach. Still unsure about whether this was the right thing to do or not, I asked the operator bluntly as to whether I should wait on the police or not waste my time? In a consoling voice he stated that a police unit should reach us within five minutes.

In the meanwhile, Asad kept insisting we leave because he thought that the entire thing was just a futile exercise. But I was adamant and kept waiting. I was aware of every passing minute and once the excruciating 13th minute had gone by, I received a call from a police officer, asking for my location. I gave them the exact coordinates and soon enough a police mobile from the Boat Basin Police Station arrived.

A sub-inspector came out of the mobile and when I narrated the incident to him, I was astonished to see that the police mobile had left and the sub-inspector was left on his own to deal with the situation. Surprised, I asked him how he would handle so many people alone but he replied that it was his job to worry about that. He asked us to go and point out the men, and to leave the rest up to him.

When I showed him the children with the horses, he ran towards them and caught them – but with a smirk on his face asked if these ‘little children’ had mugged us. I told him that another guy, who had beaten us, was their companion and that he had disappeared now.

While we were still having this conversation with the policeman, another man came crying towards us and complained that a photographer had mugged him too – the agreed amount of taking a photo was Rs30 but the photographer charged him Rs500 and when the man didn’t agree, the photographer forcibly took the money from him. He had also been beaten up and wore bruises on his face.

The sub-inspector had already started beating the children up, asking them where the money was. During this commotion, a man came to us and said that he would give us our money if we would ask the police inspector to let his children go. Angered by the mere thought that this man was responsible for the bringing up of those children, I told him to give us our money back first. This man, who wore a regular a shabby shalwar kameez, took a wad of money out of his pocket, licked his finger, counted three Rs500 notes and handed them to us. When the sub-inspector saw that the man had returned the money, he caught hold of him and arrested him as well as his children. By this time the police mobile had returned and the criminals were taken away.

This event made me understand just how dangerous it was to visit Sea View in the morning and how there was so much street crime these days. Crime is rampant in Karachi, and even our beaches aren’t safe anymore. While this paints a really dismal picture for Karachiites, what restored my faith in our city and its people was the police officer who helped us. To be honest, I was convinced we would have to pay the officer the Rs1500 after getting it back, but I regretted that thought after this incident. It was then that I realised that not all police officials were the same dishonest and corrupt officials. Some of them were true to their uniforms and I hope that they serve as inspiration for the rest of the police force too!

He is pursuing a Bachelors degree in mass communication at the University of Karachi.