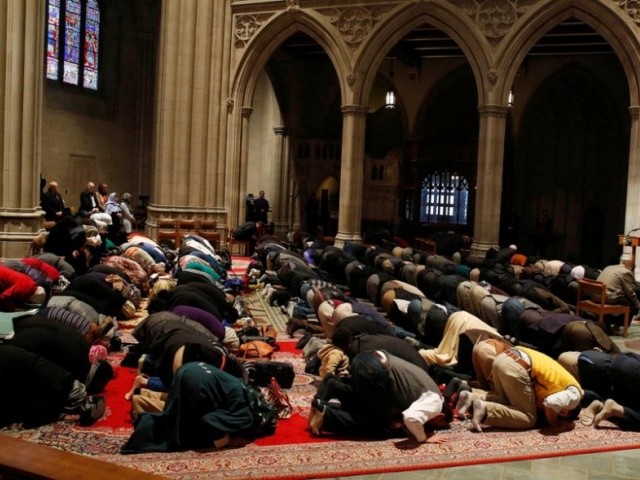 On November 14, 2014, Muslims prayed at the National Cathedral in Washington DC. South Africa’s US Ambassador, Ebrahim Rasool, gave a sermon and declared that, “never again must there be intolerance towards Christians or any other faith,” and media observers heralded this breakthrough in interfaith relations, though not all cheered. The prayers were interrupted by a heckler screaming that America was “founded on Christian principles”.

Dr Sebastian Gorka at Breitbart.com accused the Muslim Brotherhood of taking over the cathedral, inexplicably bringing in the Armenian genocide during the Ottoman Empire; all this in the aftermath of the recent events in Pakistan, where a mob murdered Shahzad and Shama Masih, a Christian couple accused of burning the Quran. Meanwhile, Daesh, also known as ISIS, not at all moved by these prayers, on Sunday, November 16, declared they had beheaded humanitarian worker Peter Kassig, whose conversion to Islam proved useless.

Between the paranoia of Reverend Graham and psychopathic religious chauvinism, how meaningful are interfaith gestures?

All humanist ideology riffs on “treat others as one wishes to be treated,” but do we follow this? Even Ebrahim Rasool, when asked about his association with the Muslim Brotherhood, responded by saying that, “people like Menachem Begin” were “terrorists” that “massacred people”. The golden rule too often becomes,

“They killed, so we kill. They are wrong, so we, also, will be wrong.”

We live in a multi-cultural and multi-faith society. Most faiths come by the chance of birth, whether in Saudi Arabia, Ireland, or China. The three largest demographics, Islam, Christianity and non-religious, claim over a billion adherents, and these split into Sunni, Shia, Protestant, Catholic, capitalist, socialist, secular humanists; then we can include Jews, Hindus, Buddhists, and all the rest.

How can the individual process these divisions?

When Islam dominates the discussion, as it seems these days, we non-Muslims often ask ourselves: how should we approach Islam? What Muslims do we know?

I live in the West. This gives me a privilege denied to journalists such as Raza Rumi, who survived an assassination attempt in Pakistan, or Saudi Arabia, where blogger Raif Badawi sits in prison for criticising the hypocrisy of the Saudi government.

My grandfather, born in Iran, moved to Lebanon where he and my grandmother gave birth to my father, and subsequently moved to the United States. My grandfather died young and my grandmother remarried a Catholic. This explains my loaded Christian name, and is a starting point for my fascination with religion. My travels and jobs led me to Pakistan, Oman and the UAE, where I spent a year in the UAE teaching at a government high school. But even if I had never met a Muslim, not to mention a radical, I still hold that they deserve equal rights and freedoms.

Yet I am sceptical of interfaith gestures, and doubt the large numbers of Muslims in Egypt, Sudan, or Pakistan who support blasphemy and apostasy laws will be consoled by Muslims praying at the National Cathedral. Harmony needs unfettered discussions of religions, the opposite of apostasy and blasphemy laws. And here we need to discuss culture. The culture that condones slavery is inferior to the one that abolishes slavery. Cultures follow laws. Saudi Arabia became the last country to abolish slavery, in 1962, a start for humanity but not an end to discrimination, as the US shows a century and a half after the Emancipation Proclamation. The horror of slavery does not end after the abolition of slavery, yet needs to happen before culture can improve.

An oft cited PEW Research poll indicates Muslims in the West are, by far, more tolerant and less in support of blasphemy laws. While to say that apostasy and blasphemy laws are the cause of the tension between Islam and the West might be over simplification, we should ask what might happen when these laws disappear. And questions like these are at the foundation of changing culture.

So what can non-Muslims do?

We must recognise that we need interfaith gestures, despite resistance. This does not mean we equivocate about the problems with extremist ideology. Bill Maher, Ayaan Hirsi Ali, and Sam Harris may not be the most persuasive speakers, and so we need to support and highlight the committed Muslim leaders, instead, who speak against human rights violations. And we need to call out those, like Reverend Graham, who reject overtures for peace. We cannot play ‘Tag, You’re Evil’, and judge all of Islam based on what happens to Peter Kassig and Shahzad and Shama Masih, rather we should quantify accurately so we do not suffer from exception/rule dyslexia. Our interfaith gestures should not be platitudes made by those safe and comfy in a democratic society, but rather movements that lead to tangible change in culture.