What good is the Shaheen1A Missile? 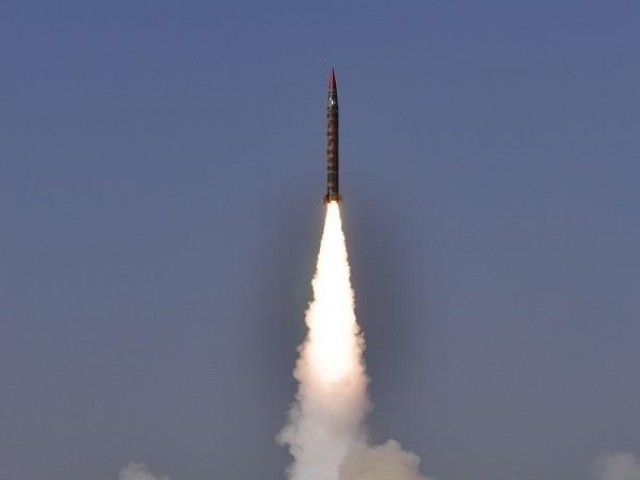 Being a nuclear power won’t save us from the forces that are destroying this country from within. PHOTO: ISPR

This was the headline that greeted me a few days ago as I logged into my Facebook account. Instinctively, I clicked on it and began reading. The story discussed the launch of a new ballistic missile called the ‘Shaheen1A Missile’ which has the capacity to carry nuclear warheads to a distance of 900 kilometres (km).

After skimming through the main news, and skipping the parts of what the naval chief had to say about this, I moved towards the comments section. As expected, patriots, nationalists, and whatever other jingoistic euphemism we use to explain such kind of people, had congratulated the military for making a machine that has the potential to kill millions in a single stroke.

I was particularly amused (read: astounded) when I read the following comment:

At first, I wasn’t entirely sure if the commentator was serious or trying to be sarcastic. Once I was finished reading his entire comment, I understood that he was as serious as a heart attack.

There were many more.

What astonishes me most is that these are educated people – people who have the resources to access an online news story, read through it, understand it and have the capacity to voice their own views about it. And yet we see so many martial opinions. These people are accepting of the fact that sectors like education, healthcare, employment, industries and what not have suffered for more than 60 years in this country, all because of our unhealthy obsession with a strong defence force.

They do not care that the country, the one this ‘strong’ military is supposed to protect, is being eaten away from within. We are polio-affected, drought-stricken, poverty-ridden, terrorism-infused, illiterate people and many of us do not even have the means to have three square meals a day. People are targeted because of their sects and ethnicities, not a day passes by without a Pakistani’s blood being spilt and yet terrorist outfits roam freely amongst us, killing us bit by bit. What good will this missile do in such a situation? In such a country, how can anyone with a sane mind support the fact that 28.2% of the entire budget is allocated to the military while all other sectors share their bits from the remaining budget?

Putting aside the fact that such a huge amount is invested in a sector that does not even contribute to the country’s GDP, does this not bring into question our own priorities as a country?

The money that should be used to redesign effective curriculums and build better schools, provide affordable medicines, free healthcare and better hospitals, putting up industries to generate employment, supporting businesses to help strengthen the economy, aid local law enforcement agencies (like the police) and provide them with better salaries – that money is instead being used to fight ‘the enemy’.

And what enemy is this?

Is it the ‘foreign, Western forces’ conspiring against our sovereign state?

Or the ‘Zionist propagandists’ focused on destroying the fabric of our culture?

Or is it the ‘(add your favourite foreign intelligence agency) agents’ who go around doing nasty things in our secluded provinces?

Which ones are we actually being protected from?

We tend to mimic India in terms of our defence. If India makes a nuclear bomb, we’ll try to make a bigger one. If India talks to the US for F-16 fighter jets, we’ll ask the US for F-16 fighter jets. If India has a high military budget, we’ll have a higher military budget. But when India works towards making its economy more stable, why don’t we mimic that? When India excels in science and technology, why don’t we try and adopt those ideals? That too, in a way, is India working on its defence. Why don’t we see it like that?

Quite recently, India has decided to work towards making model villages where different business ventures are to focus on improving the living standards of those in rural areas. Why can’t we do something like that? Why can’t we have headlines that talk about Pakistan helping its rural settlements? Our headlines are clouded with news of people dying in villages and Pakistan government’s incompetence at handling the situation. And while this is true, when will it change?

I do understand there may be an imminent threat to our nation from outside forces and the military is tackling all this; what I don’t understand is why this has to be done at the expense of other sectors. Who decides that the job of those in the military is more important than those working in schools, hospitals or agriculture?  These sectors too are doing their jobs; so why the discrimination?

While we do have our powerful army protecting us, is it absolutely necessary to have such an extravagant military budget? There are 14 countries in the world that do not even have a military force, and they are still very much present on the map of the world. I am not advocating that we have no military, but I do not see how a moderate budget for a well-trained military force will affect its working.

We are a nuclear power, yes. We have given our outside ‘enemies’ this message loud and clear. However, being a nuclear power won’t save us from the forces that are destroying this country from within. Those forces have no body or physical form. But they are just as dangerous. And in order to tackle them, the Shaheen1A Missile will not come in handy.

It is time we stop thinking about the country’s protection and start focusing on the country itself.