Our disregard for Pakistan’s national sport 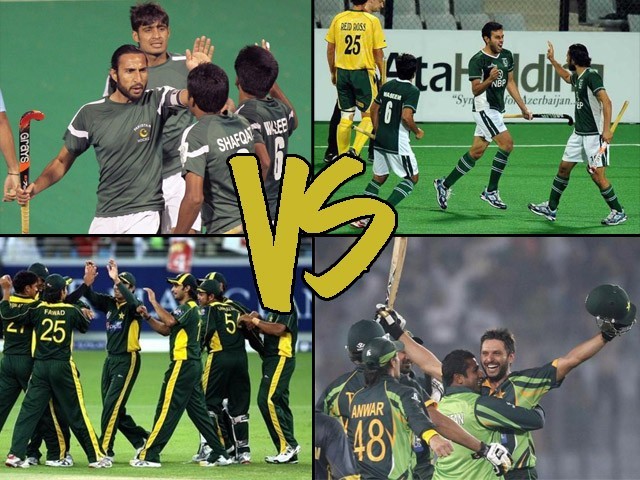 Hockey does not ignite a feeling of patriotism anymore; it does not excite Pakistani audiences like cricket nor does hockey unite us like cricket.

After their historic win against Australia in the recent Test series, chairperson of the Pakistan Cricket Board (PCB), Shahryar Khan, announced a special cash bonus for the Pakistani national team. The team will get a total sum of Rs14.75 million for their glorious performance.

Good to know. But while our cricket team seems to be aiming for the stars, our hockey team is being treated like its ugly step sister – it’s part of the national sports family, but no one really cares about it.

Recently, the Pakistan Hockey Federation (PHF) cancelled the national team’s tour to South Korea due to lack of funds and visa issues. This is not the first time that the sport has faced financial problems. Even though hockey players were awarded with special bonuses for performing well in the Asian Games earlier this year, the cheques were never cashed because the federation didn’t have any money, leaving players empty-handed. And this is not all. There have been reports earlier about how staff and hockey players do not get their salaries on time – something being off by months!

Hockey, as a sport in Pakistan, is in an utterly dismal state. And no one is willing to help.

Not many are aware of the dilemmas and problems that a player, who expects to build a career in hockey, goes through. Reality is harsh. How can anyone expect a player to do well on the field when, at the back of his mind, he’s not even sure he will get paid for the match he is playing? How can a player perform well when he is worried about feeding his family and earning a stable livelihood?

Mental peace and freedom from such worries is essential to motivate players for the game. To provide a peaceful and tension-free environment, they should be offered salaries that can atleast alleviate them from the state of poverty! Why does Pakistan only feel the need to pay its cricket players, and that too with such generosity, while players in our national sport can hardly make their ends meet?

When we invest more, we reap more. Category A players for the national cricket team receive Rs313, 000 salary per month, with an additional match fee of Rs330, 000. On the other hand, the monthly salary for a category A hockey player is a mere Rs50,000, with Rs5000 as allowance on foreign tours. The difference is astounding.

Salman Akbar, one of the finest goalkeepers of our time, whilst discussing financial problems faced by players said,

“Look at Zeeshan Ashraf; he was captain of the winning team at the 2010 Asian Games but still couldn’t secure a job in the NBP hockey team. A player like Shakeel Abbasi is on contract in the SSGC hockey team. I, myself, have been jobless for a year. After winning the Asian Games, I tried to get a job but was unsuccessful. Just this year, SSGC has given me a contract of Rs25,000 only.”

But even if we ignore the financial woes of PHF, hockey is still far behind in competing with cricket in terms of viewership and audience. From where will the federation find sponsors to invest when no one wants to invest in a place where there is no return on investment?

Perhaps it is time we hand the reins of our hockey team and federation to private investors and see how far that can take us? Obviously, the centre authorities want to have nothing to do with it.

The idea is quite simple. People watch cricket more, that’s why PCB gets more sponsorships and cricketers get paid more – and on time; people have favourite players and cricket teams, they even have video games for it, but do we see any of this for hockey? No. In fact, a majority won’t even know the name of our hockey team’s captain, let alone any of the other players. And this is supposed to be our national sport. Could it be that Pakistan in itself has refused to give hockey a considerable amount of coverage? Yes, it is not going to make us as much money as cricket, but do we have no regard for our national sport at all?

Just imagine what our reaction would be if our cricket team did not have enough money for a tour to South Africa. The reaction would be violent. It would be questioning and accusatory. But it would not be silent acceptance.

Considering our attitude towards our national game, the only thing left to do, in my opinion, is to re-evaluate its status as our national game. Instead of making fools of ourselves and letting hockey shrivel into nothingness, would it not be smarter to give cricket the national status? We have forgotten to give hockey the attention it deserves due to which it fails to ignite that feeling of patriotism anymore – the one that cricket seems to fire up, so then why remain in denial of it?

If we don’t make serious changes to our attitudes and our approach towards this game there might not be a Pakistani hockey team left in the coming years. Besides, in Pakistan, in this day and age, no other sport seems to have a chance anyway. So let us relinquish our hopes of ever having diversely athletic capabilities – let’s just concentrate on cricket – that’s what we do anyway.

Blogger, writer, and freelance journalist, he has done his Masters degree in governance and public policy from NUML. Currently working in Capital TV as a copy editor. He tweets as @LeFaizanAfzal (twitter.com/LeFaizanAfzal)