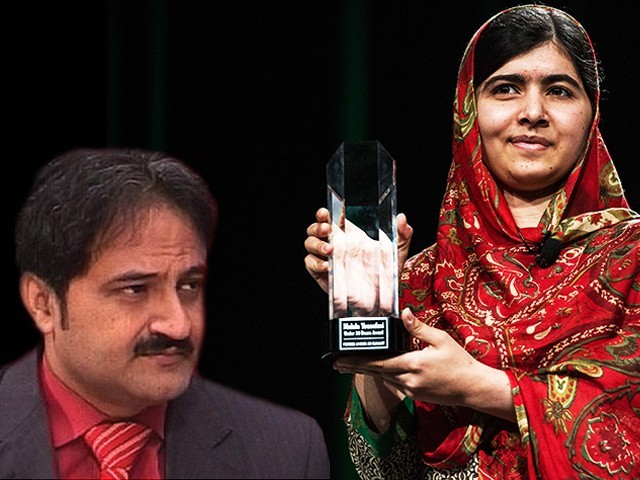 Mirza Kashif Ali, President of the All Pakistan Private Schools Federation, was the brains behind the anti-Malala day.

An exclusive interview with the brains behind the anti-Malala day.

Two days ago, the All Pakistan Private Schools Federation headed by Mirza Kashif Ali, celebrated ‘I Am Not Malala day’.

It’s said that the association, which represents a network of some 150,000,000 private schools in Pakistan, is planning a ‘Pro-Polio day’ for its next stunt, followed by a ‘Flat Earth day’ in solidarity with the members of the Westboro Baptist Church in the United States.

After chairing a panel consisting of six middle-aged men at the Islamabad Press Club, where not a single woman was present in the audience, Ali told The New York Times,

“We are all for education and women’s empowerment.”

He then picked up his mobile phone and rang his wife, demanding to know how many dishes she had cooked for dinner.

“But the West has created this persona who is against the Constitution and Islamic ideology of Pakistan.”

When asked what that Islamic ideology actually was, he consulted his copy of Maulana Maududi’s ‘Muslims and the Present Political Turmoil’ (Volume three), but was unable to answer the question.

When shown Maududi’s quote that the idea of Muslim nationalism was as likely as “a chaste prostitute,” Ali then said that Malala Yousfazai was a supporter of Salman Rushdie, and that was why he opposed her.

“It is clear that Malala has a nexus with Salman Rushdie and is aligned with his club.”

He was asked to identify the name of the club, to which he responded,

“I am not sure, but it is either the Sind Club or the Manchester United Football Club. Both are well known for their anti-Islam, anti-Pakistan content.”

When asked if he had ever read either ‘The Satanic Verses’ or ‘I Am Malala’, he responded in the negative.

“Why should I read books? There is no need to read books. Pakistani students only need to know what happened in the seventh century. And since there were no books at that time, there is certainly no need to expose students in Pakistan to books.”

Responding to a rumour that he did not actually know how to read, he responded angrily,

“That is not true. Of course I know how to read. It’s only girls who should remain illiterate in this day and age.”

He said that he hoped the anti-Malala day would catch on all over Pakistan.

“We hope to make it even bigger and better next year. We’ll hold anti-Malala processions, anti-Malala debates in all the schools, and we will produce a film about why Malala’s message of universal education for children is a Zionist, American plot. I will star in this film as the hero exposing Malala’s evil plot to the world. Salman Rushdie will be approached to play the role of Malala. Malala’s father will be played by a Christina Lamb.”

At this point, Mr Kashif Ali asked to be excused, saying that he had to go celebrate his birthday, otherwise known as ‘Illiterate Fools Day’.

Disclaimer: This post being satire is for entertainment purposes only.