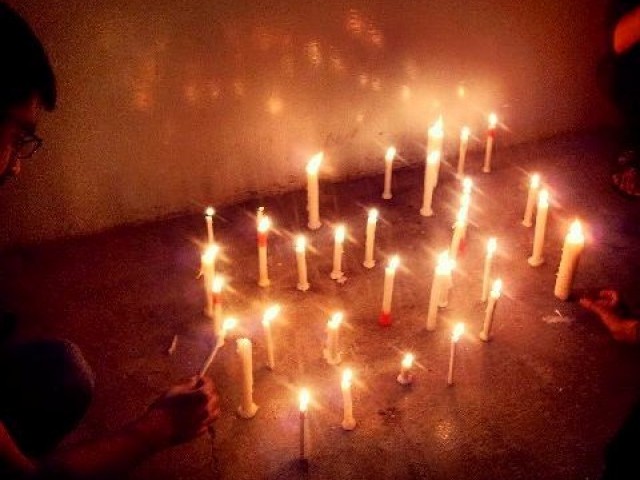 When the candles were being passed around, I saw a strange determination in these students, for many of them it was a step towards progress. PHOTO: FATIMA ANSARI

On Monday, November 10, the students and professors of Shaheed Zulfiqar Ali Bhutto Institute of Science and Technology (SZABIST) held a candlelight vigil, organised by the SZABIST Law Society, in memory of Sajid Masih and Shama Bibi, a Christian couple who were accused of blasphemy and their bodies burnt in a brick kiln in the rural area of Punjab.

More than a hundred law students gathered in front of their campus holding candles, chanting slogans like “give justice to Sajid and Shama” and “say no to terrorism,” among many others.

The crowd swelled, as more students who were unaware of the vigil also took some time from their heavy study schedule to show their solidarity for the deceased Christian couple.

The peaceful protest condemned the rise of unlawful killing of minorities in Pakistan under the controversial blasphemy law. The Law Society invited students to attend the vigil and pay their respects through the social media.

During the demonstration, one of the members of the society started off with a heartening speech, reminding his fellow pupils of the importance of the rule of law in a fragile country like Pakistan. He said,

“When we step into law school, in the first year we are taught about the values of rule of law; that no one is above the law. We are taught that no one can be sentenced or punished without due process of the law.

According to the Human Rights Commission of Pakistan, between January 1, 2013 and December 31, 2013, there were 540 ‘victims’ of blasphemy. Sadly, 540 fellow citizens were condemned to their horrifying deaths last year by mobs, by lunatics, by murders, after they were accused of blasphemy. In this country, as rule of law erodes, we are facing increasing incidents of extra-judicial killings, vigilante justice and rising crime. This is a country where even lawyers are killed for defending a man accused of blasphemy in a court of law, where politicians calling for reform of these laws are killed.”

The vice president of the Law Society also felt that a citizen’s protection can only be guaranteed by an active legal system, he stated,

“We understand that there should be blasphemy laws in general, but that protection should be for every religious group in Pakistan, more importantly, there should be due-process and a right to fair trial for everyone, and SLS (SZABIST Law Society) condemns the extra-judicial killings of minorities and Muslims as well.”

“Currently the minorities and the needy are being suppressed. The law should say that no-one should insult anyone’s God or religion.”

Beside the students, the professors also commemorated the loss of the couple. One of the teachers made an emotional statement, she said,

“We are a beautiful creation of God, who are we to kill His creation?”

When we witness such horrendous incidents happening in our society, we turn our faces towards state apparatuses, but they have disappointed us constantly. Is Pakistan heading towards anarchy? It is still too soon to say because there are still students, like us, out there protesting against these horrendous crimes. These law students are one of the voices among many who have been calling upon their leaders to pay attention to the injustice being done to the voiceless. Pakistanis have the ability to reconstruct their country but for that we need to start maintaining our law and order system. And while we are around, we will not let Pakistan be devoured by turmoil.

When the candles were being passed around, I saw a strange determination in these students, for many of them it was a step towards progress. The vigil is a message to other universities of Pakistan to speak against the illegal killings of innocent people, like the brave students of SZABIST who have risen and spoken on behalf of those who go unheard.