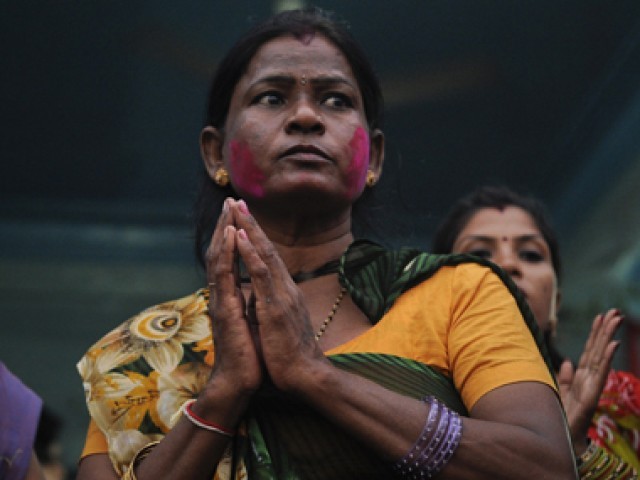 This type of conversion is its own example in idiocy and nonsense. Not to mention, it is an outrageous violation of the amicable teachings of our religion. PHOTO: REUTERS

Scuffles and screams rang through the dark night. They were three and they were burly. They had her in a firm grip with her mouth gagged with a rough cloth. It was probably 11 or 12 o’clock at night. Not very late for a summer night but half the village had no electricity, so people turned in early.

Her screams could have woken up the neighbours, if they had any. Theirs was a mud hut in a lone corner of the basti. She desperately tried to make as much noise as possible but it was of no use. The men had tied her daughter up completely now.

In the faint glow of the oil lamp, Kumari looked at her. Her eyes wide with horror, Kumari silently pleaded her mother to free her. Reshma Bai attempted to attack one of the captors yet again with renewed fervour but she was knocked down. They carried Kumari across the small courtyard and to the gate; Reshma Bai struggled back to her feet as quickly as her arthritic knees would allow and ran screaming after them,

(Don’t take our girl away brother! For God’s sake, brother!)

Paying her little heed, they put Kumari in the back of the car. One of the men turned back, striding towards Reshma Bai; he slapped her hard across the face. The bearded man said to Reshma, scathingly:

(Infidel, unclean woman! Say Allah! Who is this Eeshwar? Your daughter has been chosen by Allah. We will make her recite the Kalima so that she becomes pure and then we might get her married off to some Muslim boy. Be thankful to us! If you so much as utter a word about this to anyone I’ll strangle you! Killing infidels will earn me rewards!)

Seeing him up close, she recognised his face from somewhere but she couldn’t recall and then they drove away with her only daughter. As Reshma Bai sat down on the ground sobbing, she called out for her husband who had gone to the town but deep down she knew, at this point nobody could have saved her daughter.

Reshma Bai is one of the many mothers living in rural communities of Pakistan who have seen their children being abducted by the forceful men of the region to convert them forcibly to Islam. These people are the lowest link of the societal ecosystem which makes such blatant exploitation possible to happen to them. They are the lower caste Hindus living in rural areas of Pakistan. Their lives are a round-the-clock misery that involves abject poverty and a lifetime of insult at hands of all other dwellers of the region as their own kin look down their noses at them.

Their rights in the constitution make them entitled to equal or even more rights as citizens but in reality, their plights are untreated and worse, unheard. Alongside the already bleak circumstances, they are also falling victim to cases of forced conversions and marriages of their women specifically. Reshma Bai’s account is a fictional depiction of the helplessness of a lower caste Hindu mother in saving her daughter from being snatched away.

The real case in question these days is that of the Meghwar family. Their adolescent daughter has been abducted and forcibly converted to Islam. After the conversion, she was married to a much older man. This revolting behaviour on parts of our fellow countrymen is appalling to the extreme.

Our society unknowingly suffers from a terrible disease. The syndrome of tenacity and antiquity, which grips our minds, is a deadly force that stagnates our thinking to such degree that we lash out to destroy everything that is even slightly different from our perceived notions. This impairment causes some of us to point fingers, malign, judge, argue with or in extreme cases such as the above mentioned one, force the other person to convert to our set of beliefs.

I am aware that people will argue and criticise this as ‘degrading the country as a whole’ for the actions of ‘a few individuals’, and that my write up is ‘depicting Pakistan is a negative light once again’. But my question to them is, why are you sitting silently and allowing such atrocities to take place? Is this silence not tacit approval? If we are not fighting it, have we not accepted it? And if we have accepted it, we have permitted it. And that is exactly why all of Pakistan is responsible for the act of the few that indulge in this atrocious crime.

This disease is the reason that each and every one of our daily interaction involves judging others against a list of high end morals and traits that we generate to straddle our giant egos. In some cases, it stops at making stinging remarks, and in others, it can go as far as physically forcing someone to embrace our beliefs.

This type of conversion is its own example in idiocy and nonsense. Not to mention, it is an outrageous violation of the amicable teachings of our religion.

But however dreary the situation may seem, there are still many who are holding up the skies above their heads. There are still people who embed amity among one another because they recognise people not by skin colour, language or religion but by their humanity. The problem lies in our recurrent sense of apathy though. We lie back in comfort listening to such incidents on television, shaking our heads in disapproval but in for all practical purposes, we are doing nothing. Unless we highlight the issue at multiple forums loudly and clearly, the message will be smothered into abysmal depths of ignorance.

In order to broadcast the message of Islam, the only conversion required is in our own behaviours. I strongly condemn this act of cowardice by our people against a downtrodden minority. It is disgraceful for us as a nation and as Muslims. It has to be stopped.