Stem cell research and ethical dilemmas: How far have we come? 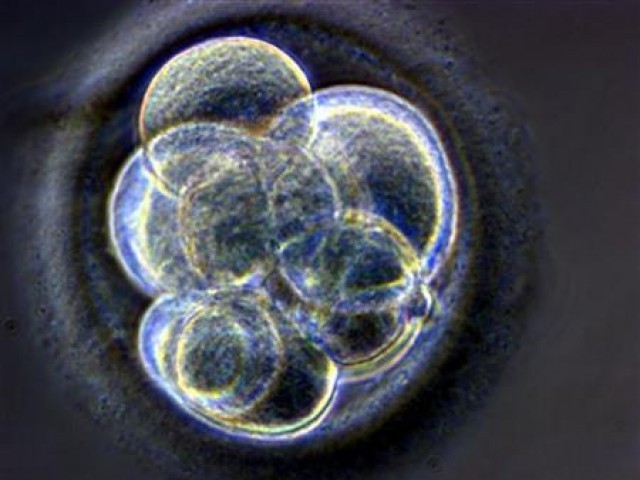 An embryo in an undated image. PHOTO: REUTERS

Stems cells are biological cells that have the potential to differentiate into many types of specialised cells in the developing stages. They are present in multi-cellular organisms. In several tissues, they mimic a type of internal repair system and they keep dividing without any restriction to serve the purpose of replacing other cells to keep the animal or person alive.

The division of stem cell through mitosis creates a new cell that has the potential of either remaining a stem cell or becoming another kind of cell possessing a specialised function – like a red blood cell, a muscle cell or even a brain cell.

Stem cells have the ability of continued self-renewal and the production of specialised and differentiated cell types. Scientists have focused on two types of stem cells retrieved from animals and humans: the embryonic stem cells and the non embryonic-human or somatic stem cells. The embryonic stem cell is originated from the inner mass cell of a blastocyst and the somatic stem cell can be achieved from the adipose, blood and bone marrow tissue of adults. Due to their special regenerative capacity these stem cells have the potential of treating many severe diseases such as diabetes, heart diseases and can play a major role in reparative and regenerative medicine.

Researches on stem cells reveal the fact that an organism can develop from a single cell and many functional cells can be used to restore damaged ones in adults. This can open entirely new avenues for healthcare medicine and medical research.

The possibility of stem cell therapy becoming effective in myocardial infarction and relieving a large amount of human suffering is tremendous. These benefits, which stem cell research is most likely to incur, should be enough to rule out the prevention and bans placed on this research by the public and politicians alike. The lack of awareness of this medical progress prevents them from realising how beneficial this technology can be to mankind.

Despite the potential stem-cell research holds, many people across the world find it controversial and raise various ethical issues that prevent the research from continuing and flourishing.

Mostly people are against embryonic stem cell research as they feel it is the destruction of embryos and potential life. The main ethical issue regarding stem cell research is that embryonic stem cells come from embryos – that are ruined eventually. This causes the public to raise ethical issues concerning the moral status of the human embryo and reasons behind the idea to destroy it.

But the logic that embryos should not be subjected to research, as they will eventually become human beings, is flawed. If that were the case, then any procedure – even fertility treatments involving the manipulation of excess embryos – should have been ruled out.

The stance of a person may become biased, or go in favour of the research, if situations become different and one of their own beloveds is the patient who needs to be saved by stem cell research.

I am not convinced by the notion that embryos are worthy of the same respect as human beings. After six weeks of conception, an embryo becomes a foetus and it’s usually by week eight of the pregnancy that a woman gets to know if she’s expecting. The mere expression that “an embryo is a potential person” is not logical enough to provide respect and rights to the embryo equivalent to that of human beings. Rather it is a very vague statement and is not reason enough to oppose embryonic stem cell research. Is this not equivalent to saying that male sperm is ‘a potential person’ too?

All these issues would automatically disappear if there was a way of creating cells that were identical to embryonic stem cells without having to destroy embryos.

Each one of these approaches has equal functionality to human embryonic stem cells obtained from blastocyst – especially the ones which are genetically stable and long lasting. Even critics of stem cell research do not completely ban the idea of it and its implications. In fact, even President George W Bush in 2001 did not ban the research or completely decide to cease it – he only restricted federal funding for such a project.

Another ethical issue that concerns stem cell research is the slippery slope of reproductive cloning and exploitation. This slope has been taken into serious consideration by politicians as it can open a window towards a new set of ethical issues regarding reproductive cloning. The two possible suggestions to counteract this slope is to either effectively ban reproductive cloning – as it can cause a hindrance to the acceptance of stem cell research or sensibly regulate the implementation that research embryos do not develop further than 14 days, which would prevent the commodification of gametes and embryos and establishing a bank that preserves the stem cells and stops propriety interests from monopolising access to stem cell lines.

If the person opposing stem cell research is faced with a situation of saving the life of either a seven-year-old child or a petri-dish of embryos, what would they choose?

If those same embryos can be used to save a child, it’ll make those embryos much more useful and worthy of respect. So there is more beneficence than there is harm.

She has recently graduated with a BSc (Hons) in biotechnology from University of Nottingham in Malaysia and is currently working at Interactive Research and Development as a research associate. She tweets as @Momalt (twitter.com/Momalt?lang=en)