Maligning Islam in the name of blasphemy 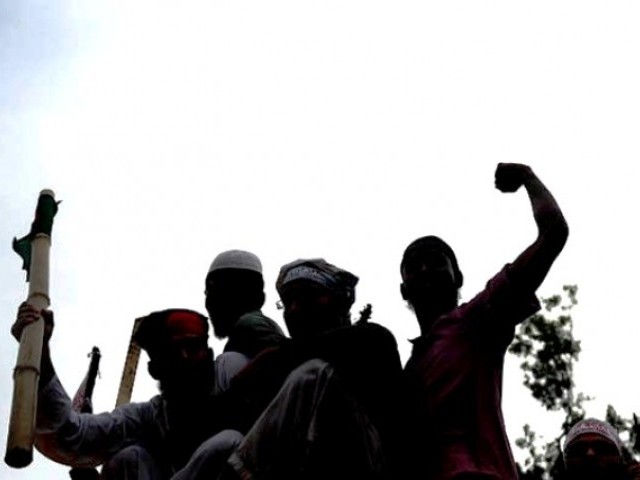 The space – ought to be occupied by justice – between allegation and execution is filled by a mob and exploited, misconstrued beliefs. PHOTO: AFP

Charred remains of two human bodies become a question mark on our humanity. Smoke that rises from their ashes is denser than one that clouds our judgment. It will not vanish into the air; it will instead taunt our silence forever. What burnt was not bodies, but the very fabric of our society.

In the presence of the rule of law – as demanded by the Holy Quran and our constitution – blasphemy would be dealt with by the aggrieved party registering a case against the accused under relevant sections of the Pakistan Penal Code. A free and fair trial in a court of law would follow where the accused would be given an opportunity to defend himself and the alleger would have to corroborate his allegation with evidence. And if the accused is found guilty, he or she would be punished in accordance with the law and Islamic injunctions.

Sadly, in several cases of alleged blasphemy, the practice has been nothing but un-Islamic, unlawful and unjust. The space – ought to be occupied by justice – between allegation and execution is filled by a mob and exploited, misconstrued beliefs. There is no due process, no court and no opportunity to defend oneself.

The threat looms over all our heads, not just the non-Muslims. All you need to have me killed by an “angry mob” is an accusation of blasphemy. There is no need for any proof, a fair trial or even an actual occurrence to constitute someone as blasphemous.

All you need is:

1. A statement from a local or regional “religious” person that labels my action blasphemous,

2. Inciting locals of the area to stage a protest against my alleged act to reaffirm their faith, and

3. Inducting a few individuals in the crowd who will then finish the task.

It does not matter if the person is qualified to give such a grave statement or not. He only needs to have the appearance of a religious person, being “perceived” as a scholar is an added qualification. Reality does not matter, what matters is perception. My act does not have to bear any semblance to blasphemy. If perceived as a scholar, he can even tag my criticism of Ziaul Haq, or laws made by him, as blasphemous.

In matters of blasphemy, an accusation suffices. Chant the slogan “this is for Allah, or his Prophet (SAW)”, and it will give this farcical act a legitimate face for the simpletons who are often the tools used in such acts that demean both Islam and humanity.

When interpreting laws, courts pay heed to the language used by legislators for it is assumed that the words used have been used for a reason. Surely Allah is the best and wisest of all legislators. Why then did He use the word “person” and not “Muslim” in the Holy Quran when He equated the unjust, unlawful murder of a person with the murder of all humans? In Islam, the life of a non-Muslim is as sacred as that of a Muslim. Islam bestows the right to life and fair trial for all human beings without any preference to religious inclinations.

The debate pertaining to what legally constitutes as blasphemy is a separate issue. Is following the proper course of law next? Ending someone’s life on a mere accusation cannot be called fair under any law, especially not under laws of Islam.

Kot Radha Kishan was the latest burial ground for justice and rule of law. A couple was killed by a mob after being alleged of blasphemy. This of course is not the first, but one of many murders of people who have been accused of blasphemy. In July this year, Gujranwala saw murder of three members of the Ahmadi community. In July 2012, a mentally unstable man met the worst of fates by being burnt alive by an enraged mob. In December of the same year, a Muslim man was dragged out of a police station in Karachi, beaten and then burnt alive. The reason for all these horrible acts is “alleged” blasphemy. The word “alleged” does not carry any meaning when it becomes a prefix to blasphemy.

It would be refreshing to see religious scholars, real and perceived, coming together to condemn, and declare this vicious inhumanity in the name of Islam as unIslamic. The responsibility to correct this wrong falls on the shoulders of religious leaders. The interpretation of Islamic injunctions in accordance with the spirit of Islam is the duty of any person who calls himself an Islamic scholar.

Blasphemy is a crime in Islam; a blasphemer needs to be punished, but only in accordance with the teachings of Islam. We cannot malign our religion in its own name. It is the duty of the state through the government to call upon Muslim scholars and leaders to gather and work to eradicate this vice of extra judicial killings based on a mere allegation which may in all probability be false in many cases.

I know our heads of state are not Hazrat Umar (RA), but neither was this a dog or a camel, it didn’t happen at the banks of Euphrates and it wasn’t hunger or thirst that killed. They were two human beings, tortured and burnt alive for a crime they may not have committed.

The act of accusing a man of having ridiculed our religion and then killing him – in the absence of any proof, process of law and justice – causes more ridicule to our religion than the alleged words or actions.   We, as Muslims, need to visit, I wouldn’t say revisit as many of us may not have deduced our beliefs but only adopted them as they have been portrayed, our beliefs. We need to ask ourselves if such acts of violence and injustice are a service to Allah or an invitation to his wrath.