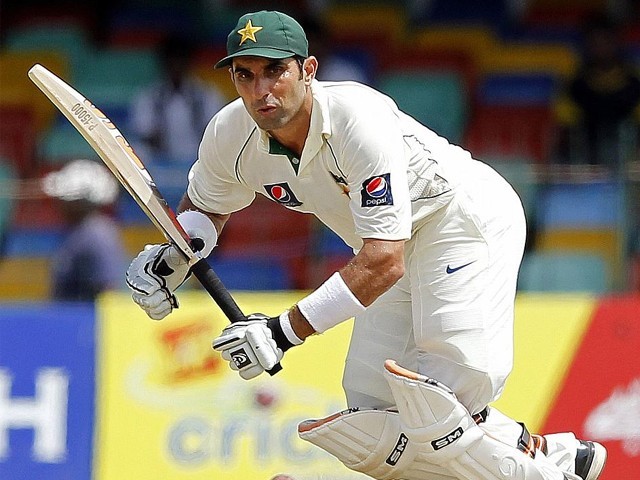 A humble servant of the game, Misbah has always been devoted towards the Pakistan cause and has given his hundred per cent and off the field. PHOTO: REUTERS

November 3, 2011 was arguably the darkest day in the history of Pakistan cricket. Former Test captain Salman Butt, along with the sensational pace duo of Mohammad Amir and Mohammad Asif had packed their bags to complete their respective times in prison after being caught cheating the gentleman’s game by means of spot fixing. Considering that team Pakistan was already deprived of the luxury of playing at home, it seemed highly likely that cricket had lost one of its most enigmatic sporting nation. However, the cricketing god’s had other plans for the men in green.

Fast forward to November 3, 2014, Pakistan, under the leadership of Misbahul Haq, comprehensively outplayed the mighty Australians, completing their first Test series victory against the kangaroos after two long decades.

As an admirer of the game, I simply cannot decide what particular detail made this historic triumph so special. Was it the fact that team Pakistan bounced back with style after a lacklustre performance in the preceding limited overs fixtures?

Was it the fact that Pakistan achieved this feat with a vastly inexperienced bowling line-up in the absence of spin king Saeed Ajmal?

Was it the fact that this series finally marked Younus Khan as Pakistan’s premier Test batsman in the past half-decade?

Was it the fact that the young blood in the team had finally come of age?

Or was it simply the fact that Pakistan whitewashed a top-tier cricketing nation in a very unfamiliar fashion; a combined victory by 570 runs over the span of two Test matches?

In all honesty, every single one of those reasons has been a significant contributor towards this sensational conquest but one small detail trumps all happiness – the fact that Misbahul Haq received the acknowledgement he has thoroughly deserved in his time as skipper of the national side.

The Misbah dilemma has been a popular one amongst Pakistani fans ever since his appointment as captain. At the time of his promotion, Misbah was certainly not a popular figure in the cricket-mad country due to his inability to finish games. It seemed almost impossible to move on after his paddle slog off Joginder Sharma straight into Shanthakumaran Sreesanth’s hands in the 2007 World T20 final. However, Misbah started his tenure as Pakistan captain on a positive note, drawing a Test series in the UAE against South Africa. Just when he started to accumulate praise from the public, he played that infamous knock of 56 in the 2011 World Cup semi-final against India, which earned him the status of an anti-hero amongst Pakistani fans. That morose contribution marked the beginning of what came to be known as Misbahul Haq’s defensive brand of ‘Tuk-Tuk’ cricket.

Misbah took over the captaincy of the ODI side later that year due to a spat between former captain Shahid Afridi and coach, Waqar Younis. His captaincy, ever since its inception has forever been under scrutiny from the masses due his defensive approach to the game and his conservative nature.

The question to be answered here is: Is Misbahul Haq worthy of leading the Pakistan cricket team in the 2015 World Cup?

The answer to this question is very subjective as it depends on Misbah’s form in one day international cricket. The 42-year-old himself has stated that he will only lead the team down under if he regains his batting form. Also, with young and budding middle order batsmen in the shape of Sohaib Maqsood and Asad Shafiq, Misbah will certainly have to compete for his spot. That said, let us take out some time from all the criticism and simply appreciate Misbahul Haq’s contribution to Pakistan cricket.

Taking over the captaincy in an extremely frail period in the history of Pakistan cricket, Misbah added calm and stability to a team which was completely out of sorts. During his tenure, he has avoided all controversy, has faced the music each time after failure and has most importantly managed to silence his critics time after time. Another major attribute that can be accredited to Misbah is his ability to build a cohesive unit which works around a strict game plan. Misbah’s unconventional approach to cricket has brought him a great deal of criticism, as the limited overs team has somewhat lost the ability to chase scores exceeding 250. However, in a period where Pakistan has to play its home games away from home, Misbah has achieved a fair amount of success too. His joint Test record of 14 wins as Test captain speaks for itself.

A humble servant of the game, Misbah has always been devoted towards the Pakistani cause and has given his hundred per cent, on and off the field. Even though his tactics might lean towards the defensive more often than not, Misbah has defied both age and the pressures of captaining Pakistan, succumbing to none and remaining steadfast in search of his big break. The fourth day of the Abu Dhabi Test against Australia provided just that for Pakistan’s aged talisman.

After bouncing back from 7-2 in the first innings of the first Test, team Pakistan responded in spectacular fashion, thrashing Australia in all facets of the game in the 29 sessions to follow, and looked an extremely united and result grinding unit. Misbah’s personal accolades in this series have also been tremendous, as he amassed 271 runs in three innings at an average of 135.50. This tally of runs included a crucial resolute half century in the first Test, followed by back to back centuries in the second Test, the last of which was scored off just 56 balls.

It was indeed ironic to watch ‘Tuk-Tuk’ Misbah break the record of the fastest half century along with levelling Sir Vivian Richards’ record of the fastest century in Test cricket. A sight for sore eyes, Misbah achieved the unthinkable by powdering the Australian attack, hitting 11 fours and five sixes. It was indeed relishing watching Misbah play ever so freely under negligible pressure; a situation that had been alien to him over the past four years. As a cricket enthusiast, it was a great relief to watch Misbah at the peak of his game at the age of 40, leading a spirited young inexperienced Pakistani side to a memorable victory.

It was only two weeks ago that the men in green were in shambles, surrounded by controversy and on the verge of falling apart. Captain Misbah has yet again responded strongly by delivering Pakistan’s finest Test feats in recent history; one that ranks higher than the 3-0 whitewash against England in early 2012.

Coming back to the debate over Misbah leading the team in the World Cup, I strongly believe that in the situation that he is tasked with the job; he deserves the full support of the Pakistani public and media for he has earned that respect throughout the stretch of his career. He has always stood tall as a pillar of fortitude for his team with the profile of being Pakistan’s most unusual hero. Love him or hate him, you must acknowledge captain Misbah’s contribution towards reviving Pakistan as a robust cricketing force.