Reyhaneh Jabbari lives on – even today 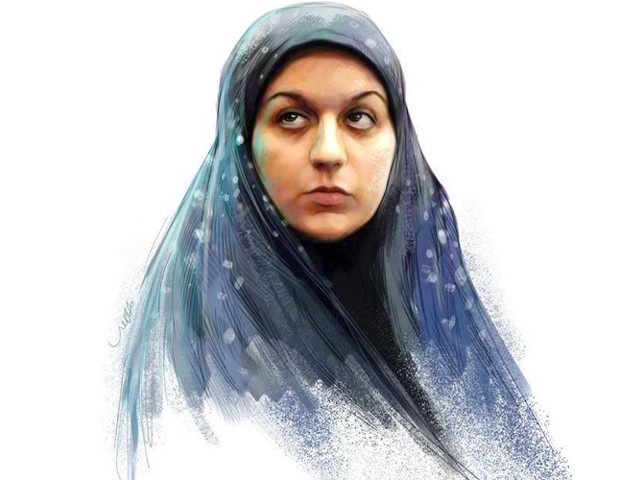 Through my soul, my spirit, I live on. Through their sins and injustice dealt to me, I live on. I live on. PHOTO: ‘Save Reyhaneh Jabbari From Execution In Iran’ Facebook page

And so I meet my eternal Lord. I, Reyhaneh Jabbari, am dead. But my legacy continues to live. For it is a living stain on those who dismissed me, for the judicial system that so prodigiously accused me of something I was not fully guilty of. True, I had stabbed a man – but when does self-defence become murder? When does killing a man, who tries to rape you, become a heinous crime?

According to their version of the truth, I had pre-planned my own destruction! How amusing it is to pre-plan the murder of a man who is in the Iranian Intelligence and how prudent it is to murder a man while I live in a patriarchal, misogynistic world. By saying that I went to the office willingly, they conclude that I consented. By saying that I stabbed him in the back, they say I killed in cold blood.

This world is a dark place for women.

I was interrogated and cross questioned and accused, but my part of the story was never given proper consideration. How many times has it been that victims of sexual assaults have been blamed for their fates?

Not seldom, I am certain.

She wore short skirts, she was out at night, she wasn’t wearing a head scarf, and the list goes on. Nobody in their right mind would even dare to blame the he’s. Seven years I spent in that cold, dark place. Seven years I went to sleep every night, not sure if I would live to see another year, another day. Seven years I waited for justice to come my way and it never came.

But death came. It came at last, and it was not menacing, it was not dark. It was, instead, a welcome transition. Now I can finally go and meet the eternal One, to whom we all belong. I want to question Him, to demand justice from Him and I know justice shall be served, at last. The courts of this world may accuse me and exterminate me, but in His court, they will pay. And true justice shall prevail. I have waited seven long years and I will wait more for justice to come.

And then I turn my head towards those who blame my religion for my misfortunes. Certainly, this world is as spiteful as it is misogynistic. They say this is how Islam treats women. They say this is a woman’s worth in Islam. Fie, I never stopped believing in Him and I embrace the awaiting orbs of death with concrete faith in Him. It was not His laws that did me wrong, it was the law of His creation. And not just laws, but their mammoth egos that wouldn’t let them accept the fact that a respectable man could attempt to rape a woman. And then, there was the audacity the woman showed, she stabbed him! No, no, no. That was not acceptable at all, to empower women and to equip them with the power to say no and to be the master of their own will is certainly not on their bucket lists. Women are supposed to be submissive, receptive, and inferior.

It amuses me to think that I belong to the same place Artemesia once belonged. That daring, audacious, challenging bravado of hers is to be seen no more in women who belong to this holy land because they have been warned – this is what will happen if you come out or react to acts of injustice.

Aren’t women told to accept their destinies because of their gender roles?

I might be dead but, as the judiciary fails to realise, their attempt to tarnish my reputation and culminate my life has ended horribly, I am bound to live on forever. The world shall forever know who Reyhaneh Jabbari was. And though some may blame and accuse me, there are some who believe me. I am no different from all those victims who are blamed for rape.

‘You know better that death is not the end of life.’