Why I think you shouldn’t watch ‘Horns’ 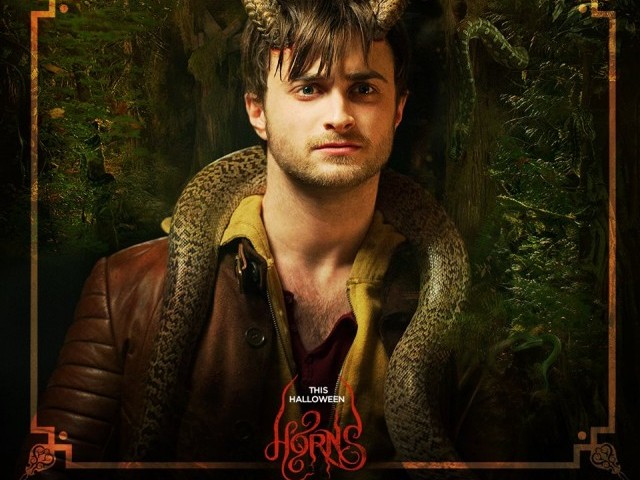 Until and unless you like such kind of films or you are a Radcliffe fan, I wouldn’t ask you to watch it. PHOTO: HORNS OFFICIAL FACEBOOK PAGE

These days, with an over abundance of clichéd romantic and post-apocalyptic dystopian movies, original films, like Horns, are a breath of fresh air. Based on the book of the same name by Stephen King’s son Joe Hill, Horns is a fantasy drama that tells the story of a man who suddenly grows a pair of horns after he is accused of his girlfriend’s murder.

The story is set in a small town, where the Harry Potter-famed Daniel Radcliffe’s character, Ig Perrish, has been accused of killing his girlfriend Merrin Williams (Juno Temple) by bashing her skull in. However, due to the absence of any concrete evidence, Ig hasn’t been charged with murder. The first few minutes of the movie establish that the citizens of the town vehemently hate him and compare him with the devil as they protest outside his house holding placards.

There are even local news vans following him around town. Much like the other townies, Ig’s parents don’t seem too certain of their son’s innocence either. In fact, the only person who seems to believe in Ig is his friend Lee Tourneau (Max Minghella), who is also his lawyer.

One morning, after Ig wakes up from a night of his drunken debauchery, he finds two small horns protruding from his forehead. At first, he thinks he might be hallucinating, but he is soon proven wrong. Ig expects people to be scared, or at least surprised by the sudden change in his appearance, but almost everyone seems to take his devilish horns at a face value.

Not only that – people begin to reveal their darkest, deepest, most sinister thoughts and secrets to him.  People also begin to ask him for his permission to act upon those thoughts, as if he is the devil. This bit is perhaps the most entertaining part of the entire movie (especially the news-crew fight scene). Ig relates his new influence over people to make them do or say things to his newly grown horns and sets out on a mission to find out Merrin’s real killer by using his horns. To know how he uses them, you’ll have to watch the movie.

If we divide the movie into two parts, the first one could be described as an eccentric mix of dark humour and some really interesting twists. The second part of the movie is much faster in terms of pace, with completely unpredictable revelations, and is somewhat more sinister and dark than the first. It even includes a pitch fork!

I have not read the book yet, but the movie has a very heavy religious undertone. There are quite a few references to Christianity used throughout the film. The movie strongly focuses on how the devil was once an angel and circles around other religious aspects. However, despite its demonic theme, this movie is much like a murder-mystery-cum-adult-fairytale.

As far as the acting is concerned, Radcliffe has once again outdone himself. His performance, along with almost every other cast member, was quite brilliant throughout the movie. Even his American accent was up to perfection. Juno Temple, who only stars in flashbacks, also adapted a pretty impressive American accent.

However, the movie has some serious lows. It got quite dull in some parts and some of its scenes didn’t seem to fit in with the rest.

The dullest parts of the movie were perhaps all the flashbacks. These flashbacks portrayed the beginning of Ig’s and Merrin’s relationship when they were young, and how they continued their relationship until the time of the girl’s death. These flashbacks were certainly very critical to the movie’s plot, but from a viewer’s point of view, they were much too prolonged, which was exhausting to watch.

Even though I liked the movie, I wouldn’t recommend others to watch it. It was quiet enjoyable at first; I got hooked as soon as the movie began, but somewhere down the road it got a bit absurd. It just felt like one of those movies that have too many strong components that just don’t seem to fit together. Until and unless you like such kind of films or you are a Radcliffe fan, I wouldn’t recommend this film to you.

Horns was premiered at the 2013 Toronto International Film Festival and has received mixed reviews from critics. This movie exemplifies that great casting, brilliant acting, perfect cinematography and a strong screenplay can make an average movie look good – but it can never make it great. Alexander Aja, the director who has movies such as The Hills have Eyes and Mirrors on his resume, has certainly failed to deliver with his new movie.

A student of Mass Communication at Karachi University. She loves travelling, photography and reading. She tweets as @ItsRmsha (twitter.com/ItsRmsha)

Doctor Who 50th Anniversary Special: One of the best episodes ever!