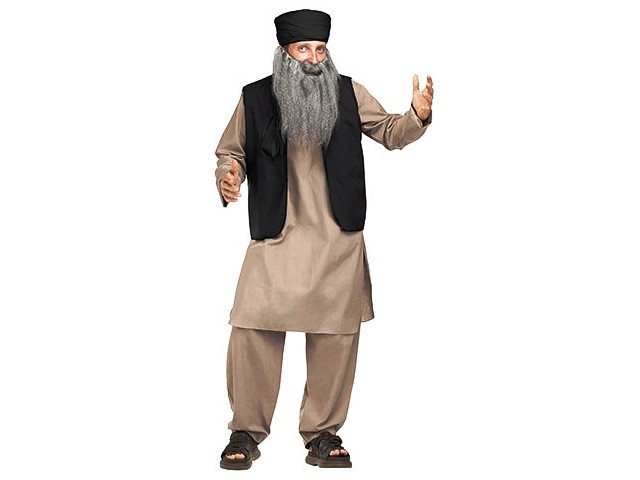 Selling a costume, taking it down when people protest, and then providing lame excuses and apologies only further tarnishes your image. PHOTO: Walmart.com

I liked you. I really did. Your prices are decent and I occasionally made a run to you when other stores in the area were closed, because of your late hours of operation. You were convenient and I really liked that about you.

However, it came to my attention a couple of days ago that you tried to sell a Halloween costume depicting an ‘old Pashtun Papa’, full with a beige-coloured parthog and kameez, turban and a long fake, grey beard.

I’ve realised that you have now taken down that ‘costume’, apologised, and tried to provide a rather weak justification for why it was even being sold on your website in the first place, but there are a few things that you need to be educated about Pashtuns before you decide to indulge in something as ignorant and offensive again.

First off, the costume that you were trying to sell for $39.95 was not exclusive to the Pashtun culture, or even Pashtuns for that matter; secondly, Pashtuns are not Middle Eastern — we are actually situated in South and Central Asia; and lastly, you mentioned in your description that “nothing is sacred this Halloween”, and “shock your friends with this Islamic costume”, which clearly explains to me that you are stereotyping all Pashtuns to look a certain way, perhaps even “Taliban-like” having long beards and turbans. I also fail to see where exactly the ‘shock’ factor fits under all of this? Unless you meant to shock us with the sheer inappropriateness and absurdity of the costume in the first place; if that was your intention, then congratulations, you have clearly succeeded.

So, let’s get a little more detailed shall we?

Before we move on and address the other ignorant things you mentioned in your description, let me explain the garb. If you’ve ever visited places within South and Central Asia, almost every single other man wears that outfit, or ‘costume’ as you seem to have called it. So, it’s not just limited to Pashtuns/Afghans, or even Pashtun culture, as you seem to assume. And while turbans are quite prominent among Pashtun and Afghan men, they also commonly wear a ‘pakol’ which is the Afghan cap that is soft, round and flat from the top, typically made of wool fabric. (See image below)

While there are many Pashtun immigrants living in the Middle East, we are primarily situated and scattered all across South and Central Asia: larger populations particularly living in Pakistan and Afghanistan. So, I really don’t understand where you got the idea that we were “Middle-Eastern” or the erroneous fact that were situated in the Middle East. We speak many dialects of the Pashto language, not Arabic, and even though the written language is influenced by the Arabic script, our language is clearly very different.

As for mentioning the part about “Islamic” costume, again you are looking at it from a very skewed lens. Islamic garb is not synonymous with Pashtun or Afghan garb. If you do a Google search for “Islamic costume for men”, (and perhaps you should have done that before making blatant assumptions), you will see a variety of outfits for men, signifying appropriate Islamic dress. As a matter of fact, there is no such thing as a universal Islamic dress for men (which is what you have assumed with the parthog and kameez), as it varies from country to country, culture to culture. The fez, a small round netted cap, is however seen as Islamically symbolic, and is usually worn by men, especially during prayer or when attending the mosque.

And what’s with the long, grey beard?

Both my father and father-in-law are what you would call ‘Papa Pashtuns’, but they don’t have long, grey or white beards. You are stereotyping all older Pashtun men to look a certain way and you are wrong – very wrong – to assume as such. Besides, beards are not, and should not, only symbolise Islam or Pashtuns, as men from many difference religions and cultures around the world have beards too, including Sikhs, Hindus, Hippies among many others. As a matter of fact, beard growth is quite ancient and it even predates Islam. If you think about it, it’s just natural facial hair. Some grow it for religious/cultural reasons and some grow it for personal or superficial reasons. There is no need to classify long beards as only being exclusive to Muslims or Pashtuns.

It appears to me that this isn’t the first time you have tried to sell a costume that was culturally offensive, ignorant, and inappropriate. In the past, you’ve also tried to sell costumes representing Arabs, such as ‘Arab Sheik’ and ‘Chic Sheik’. Again, I fail to comprehend what exactly your intentions were in trying to sell such costumes, because mocking and ridiculing a culture — that you clearly have no clue about – is not funny. It’s just foolish and crude and you as one of the largest retailers in North America should know better.

Selling a costume, taking it down when people protest, and then providing lame excuses and apologies only further tarnishes your image. There are many people who will probably never boycott you, because you are convenient and affordable. However, that doesn’t give you the audacity to create and sell costumes that are just wrong and offensive on so many levels.

Ignorance is not bliss, it’s actually quite harrowing. And so is stereotyping and painting a whole ethnic race with a single brush. Educate yourself about the various different cultures, ethnicities and religions around the world before you go on to make erroneous, impetuous assumptions. And here’s some useful advice: if you never want to get embarrassed again, do not — and I repeat, do not — create and sell such costumes in the first place!