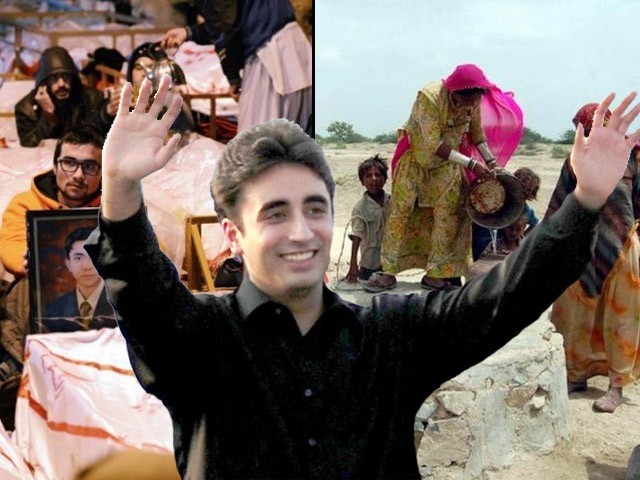 It was revealed in the second week of October that around 300,000 bottles of mineral water – meant for the drought victims in Thar – expired in a government warehouse without ever reaching the masses. Earlier this year, wheat supplies for the Thar victims faced the same fate. At least 31 lives were lost in October and 234 more, mostly children, in the preceding episodes.

A report revealed that the district administration of Thar was in the hands of Makhdoom Amin Fahim’s son earlier this year. Fahim happens to be the senior vice-chairman of Pakistan Peoples Party. So is PPP not responsible for the Thar mismanagement?

An inquiry commission formed to probe the handling of the drought back in April claimed that the Sindh Health Department and elected representatives of the area were to be blamed for the Thar fiasco. All of them also belong to the PPP. Even with so many people dying, the party just doesn’t seem to learn. In fact, it just doesn’t care how its negligence is becoming more and more fatal.

Where was PPP when people were dying in its own constituencies last month?

With the all important Karachi jalsa – a jalsa meant to introduce our ‘beloved’ Bilawal to the political arena – obviously the party leaders had better things to take care of. Keeping aside the fact that this jalsa failed miserably, Bilawal and the rest of the PPP leadership failed to elaborate on any plans the party intended to work on, to deal with the situation in Thar.

And why would they?

After all, death in Thar is hardly new.

It’s not as tantalising as blaming other parties for the on-going crises. Don’t trouble trouble until trouble troubles you? Over a 1000 people have died in Thar in the last couple of years – but so what? Just because the media made a little racket this time doesn’t mean the PPP’s priorities are suddenly going to change. Obviously.

So what was worth mentioning in the jalsa then?

Well, we had our ever-loved Bhuttos for one. Bhuttoism for another. Buzz words like shahadat, jamhoriat and a little bit of Bhuttoism again. Sprinkle some “causes” that you never did anything about when you were in power on top and viola! Behold, the glorious PPP leadership of today.

In his speech, Bilawal took credit for the PPP responding to the Hazara-Shia sit-ins in Quetta and sacrificing their government in the province for their cause. But what he didn’t mention is how corrupt his government was in the province, how appointments were made on nepotism and how one of their MNA’s protested against his own party.

Syed Nasir Ali Shah, the Hazara MNA from Quetta, staged a sit-in at the entrance of the Parliament House in October, 2011. He belonged to the PPP and resorted to protesting against his own party after 14 Hazaras were gunned down in Quetta, and no action was taken by the government.

The one thing he did do, and which was also one of his first steps after taking oath as CM Balochistan, was to appoint Nawabzada Humayun Jogezai as chief of police in Quetta. Jogezai, often accused of having links to the LeJ, in the past ordered the police to open fire on Hazara protesters, killing 25. He is Nawab Raisani’s son-in-law, in case someone didn’t know. Coincidentally, Hazara killings picked up after he was appointed. Such was the state of Balochistan under the PPP.

In fact, the ‘sacrifice’ the PPP government gave to the Hazara community, which Bilawal boasted about in his speech, wasn’t the party’s first course of action. Initially, the PPP chief minister proposed to settle the Hazara mourners’ issue by sending them truckloads of tissue papers. PPP’s tissue paper strategy (read: utter negligence) worked for a couple of years until, finally, protests broke out throughout the country and the ‘tissue papers’ ran short. That was when the prime minister – also belonging to PPP – rose from his slumber and took notice of the situation.

Once PPP made the ‘ultimate’ sacrifice and removed its government, a couple of peculiar incidents took place. One PPP minister, Ali Madad Jattak, was arrested with 15 guards because the Hazaras had complained that he had ties with a “defunct militant group”. Rumour was that the guards were LeJ men. Alamdar Road witnessed two blasts – one was a suicide blast inside a snooker club and the second was a more deadly one from an explosive laden car. In February, the Hazaras were targeted again, this time an explosives-filled water tanker was used.

Later in the year, FC recovered 104,480 KGs of explosives from a warehouse in Quetta, the largest find of its kind in the country’s history. The officials described the warehouse as a “car-bomb factory” complete with mixers, detonators, remote controls and lots of other explosives to fit into vehicles. Coincidentally, the car-bomb factory belonged to a PPP leader who was later arrested.

Clearly, PPP has done a marvellous job in Balochistan.

Coming back to Thar, is it a coincidence that Bilawal’s speech was oblivious to the droughts and deaths over there? Did he not know what was happening in this part of his province? Sindh has remained underdeveloped since partition, because we have had no resources. While the media has been quick to highlight Bilawal’s speech as an exclusive event, not many have questioned his lack of empathy towards the people of Thar. Perhaps, there are quite a lot of PPP apologists in our media industry.

In his interview after the October 18th jalsa in Karachi, Bilawal claimed that 60% of Pakistan’s population is young, and so is he. Therefore, he can relate to them more than any other leader in Pakistan.

Yes, he can relate to the youth about just as much as Justin Bieber can.

A billionaire kid who has lived most of his life outside Pakistan, who doesn’t even know the language, believes he can relate to a country where, according to World Bank, 60% of the population lives under the international poverty line, more than anyone else – all because he is young?

The level of delusion is staggering.

So while the young prince lives in his bubble, relating to his darbaris in the party and the media, where does that leave the people? With death and hunger, of course. Those are the gifts the party has brought to their people. Thar and the Hazaras are but just a glimpse.

Consider that all over Pakistan, 6,126 lives have been claimed by suicide bombings so far. On the other hand, we have PPP’s governance in which by 2011 over 7,000 people were killed in Karachi alone. Such was the level of interest this party possessed in alleviating the crime rate in their own province.

Hunger is the bigger hallmark here though. Shortage of food and malnourishment is not just an issue in Thar; it persists throughout Sindh to a disgraceful extent. In Ethiopia the stunting rate for children is 51%, in Eritrea it is 44%, in Sudan 40%. In Sindh it is 56.7% and within the loyal PPP stronghold of rural Sindh, it’s 63.3%.

One wonders how long it’ll take for PPP to understand this.