El Clásico2014: Clash of the titans, Real Madrid vs Barcelona 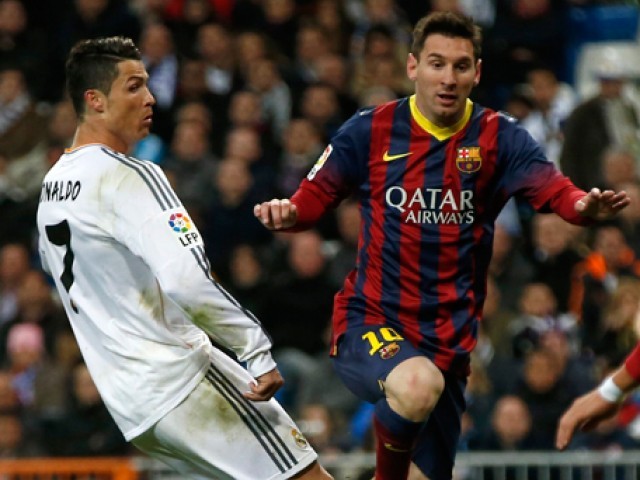 There are rivalries like Liverpool versus Manchester United, like AC Milan versus Inter Milan, like Pakistan versus India, and, let us say, like Imran Khan versus Nawaz Sharif. They are fierce. They are violent, and of course amazing to watch.

But when juxtaposed with El Clásico: Real Madrid versus Barcelona, they are nothing. Absolutely nothing. The ultimate rivalry between the world’s two wealthiest and most successful clubs is considered to be the most ferocious, most passionate and most followed sporting contest throughout the whole globe.

There is violence. There is vandalism. There is vehemence. And these are only the Vs.

There is shoving, pulling, red-card-showing, grabbing, shouting abuses and tearing at each other and doing things that I can hardly state here. It is not just a game. It is a matter of pride and prestige. It is the battle for number one, for second to none.

What’s the most beautiful aspect of this hotly contested game is the dynamism of its statistics. Since the first time they met in 1928, both teams have clashed against each other 228 times. Real Madrid bagged 91 games, Barcelona bagged 88 and 48 fixtures went draw. Here, Madrid fans can proudly boast of their supremacy over Barcelona. However, if we include all the matches that have ever been played between the two teams, including the unofficial and friendly ones, that’s the point where, my dear friends, things get real pointy. Here, Barcelona fans have more winnings to boast of. Out of the 260 times they came across each other, Real Madrid triumphed in 95 games, Barcelona in 107 games and 58 games went draw. It is this uncertainty in these statistics that makes this tussle exquisite and mouth-watering to watch.

At the present moment, Barcelona stands fixated at the top rung of the La Liga ladder with seven wins and 22 points in eight games. On the other hand, Real Madrid stands two rungs below them with six wins and 18 points in eight fixtures. Even if Real Madrid wins this game, it won’t be enough to drag down Barca from the number one spot.

The Uruguayan star, and the winner of this year’s European Golden Shoe award, Luis Suarez, is also set to make his first appearance on the field after a four month ban imposed upon him due to the biting incident involving him in a match against Italy in World Cup 2014 group stage match. This coincidence has piqued people’s interest to an even higher level. Plus, this has also given a historical touch to this already much-celebrated game. In the last transfer window, Barcelona purchased him with a record, transfer fee of £75 million, making him one of the most expensive players in the history of the football world. So yes, it is true that he will be the cynosure of all eyes in Santiago Bernabeu on October 26.

In this El Clásico, both teams will feature the planet’s best and most expensive players who can actually conjure magic in the field. Barca’s newly-appointed manager, Luis Enrique, possesses in his arsenal world class players like Dani Alves, Xavi, Iniesta, Rakitic, Messi, Neymar and Suarez. Whereas Carlos Ancelotti has star players like Ronaldo, Rodriguez, Benzema, Casillas, Kroos, Ramos, Modric, Pepe and Marcelo Vieira who can leave their opposition dazzled, baffled and rattled within mere minutes.

Carlos Ancelotti, however, will certainly miss the injured Gareth Bale who is already ruled out of this big game. However, what enhances the immense charm of this game is the clash of the two titans of the footballing world. Yes, right you are, it is the epic, never-ending battle of Lionel Messi and Cristiano Ronaldo. Both need no introduction, they are the best players of the footballing world as of now; both are also the top contenders for the Ballon d’Or 2014 award.

In the Clásico, Messi has more scintillating records than Ronaldo. Messi ranks as the top-scorer in Clásico history with 21 goals. Just now, he festooned his trophy room with yet another Golden Ball Award in the World Cup 2014.

Ronaldo, on the other hand, is in the full flower of his form. Only eight league games and he has already netted 15 goals. This is a record of the most goals ever scored in the history of La Liga in first eight matches. This mini-El Clásico between Ronaldo and Messi will be crucial to the outcome of this match. It is this immense competition within the competition that makes this game a raving beauty.

So, get ready football fans, for this is a match not to be missed. Do all your household chores in advance, cancel out all the meetings and appointments happening today and get ready. Get ready to be amazed and dazed, for football’s biggest and most eagerly anticipated game is on its way to dazzle us, down to the very marrow of our bones.

The writer is a struggling A level student who loves to read, write and play football.