Is ‘Annabelle’ a copy-cat? 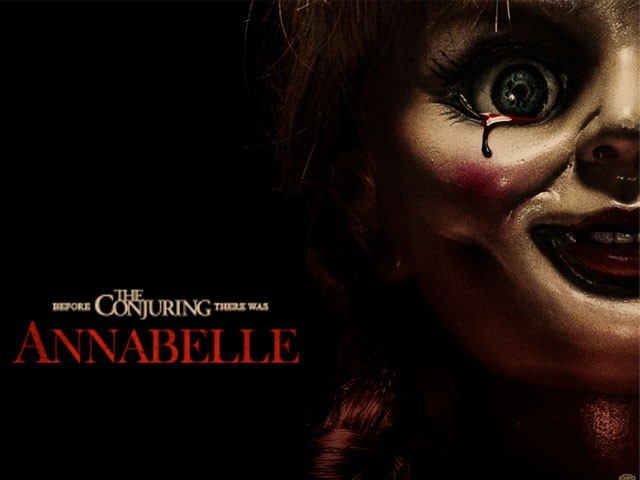 The dialogues were basic, the acting was mediocre and monotone, and the plot was second-hand. In amalgamation, this is what has barred Annabelle from being a masterpiece.

Annabelle was eagerly awaited on grounds of being the prequel to what is being called one of the best haunted-house movies ever. While The Conjuring was laden with original concepts and a spooky aureole, Annabelle, though not a bad horror flick, failed to live up to the expectations. Of course, with a great movie like The Conjuring already on board, expectations ran high but Annabelle did no justice to the masterpiece it followed.

The movie isn’t bad. But it does not deliver the hair-raising spooks and flabbergasting little wisps of instantaneous shock that its predecessor did so well. While its parent film, The Conjuring, had sudden bursts of fright with its “clap, clap”, Annabelle had its “I like your doll” – which seemed a good start but the movie wavered.

The plot was ultra-predictable, and a lot of things were just there – with no explanation whatsoever. Some of those things were the same as The Conjuring, like the music that’s played when the little girl plays with her toy in Annabelle. Okay, sure, I understand that “before The Conjuring there was Annabelle” but that tune was supposed to accompany that particular toy and not the doll in Annabelle and hence its absurd placement was confusing.

When the trailers and teasers came out, we were all expecting Annabelle, the doll, to be a female counterpart of good ol’ Chucky. Remember Chucky?

The phrase still gives me the chills.

To our utter disappointment, however, Annabelle the doll is not animated. It does not move – and the one time that it does, it’s the ‘demon’ that’s making it move. This part, too, is a bit confusing. If it’s not the ghost of Annabelle Higgins haunting the Forms, as Father Perez says, why is the doll (spoilers: which is supposedly possessed by Annabelle’s ghost whose blood fell into the doll’s eye after she committed suicide) all throughout the movie?

The other major flaw in the movie seemed to be the setting. The film is set before the events of The Conjuring – somewhere in 1968. The Conjuring sure looked retro, with its old-fashioned apparels and outdated hairstyles but Annabelle didn’t manage to have the same effect. The treatment of time and space in the movie is a setback; other than the TV set, which nailed the outdated appearance, the movie didn’t capture the surrounding very well. Even Mia Form’s (played by Annabelle Wallis) clothes took a wrong turn.

Other than that, on a personal level, I found Annabelle to be copying a lot of things from Insidious, Chapter 1. The Conjuring too was a mélange of The Amityville Horror and The Exorcist and it even had fragments of The Blair Witch Project in it – horror movies do give and take, but the problem with Annabelle is that the similarities are too vivid to be ignored.

This realisation first dawned on me in the scene where Annabelle the doll soars up in mid air; if you look closely, you can see the demon behind the doll and when Mia sees it, she is shocked and screams. An exact replica of this scene can be found in Insidious, where Josh Lambert’s (played by Patrick Wilson) mother is talking and on doing a double-take she sees a demon half hidden behind Josh and screams in alarm and fright.

Another part extremely similar to that in Insidious is after Mia turns off the song that is being played, it starts playing again on its own. She goes back to check how this happened and sees a girl running. She runs after her and encounters Annabelle’s ghost. In Insidious, Renai Lambert (played by Rose Byrne) sees a goblin dancing to a tune and runs after it, only to encounter it inside her home.

Then comes the scene where some demonic entity appears in the form of Father Perez with a wounded face, and in a distorted, horrible voice, shouts,

“May God have mercy on your soul!”

This exclamation, though scary, seemed to me not unlike the lady in Insidious, Chapter 2, who shouts, “Don’t you dare!” in much the same manner. Moreover, this dialogue has already been used in many previous horror movies, standing out specifically in The Amityville Horror.

I will reiterate that Annabelle isn’t bad. It’s fun to watch, scary but not heart-thumping, hair-raising kind of scary. What Annabelle failed to do was deliver the excellence that The Conjuring boasts of. There were fewer scares and the setting was bright and colourful – except the part where Mia goes down to the storage and we get to see lots of lightening and darkness.

Annabelle also lacked depth in its script – perhaps its most striking dialogue was “Crazy people do crazy things”. The dialogues were basic, the acting was mediocre and monotone, and the plot was second-hand. In amalgamation, this is what barred Annabelle from being a masterpiece.

Yes, the doll is probably going to give you pediophobia (fear of dolls) but not of the magnitude that Chucky instigated and nowhere near to the coulrophobia that Pennywise the dancing clown from It instilled perpetually in our hearts – pertaining to the fact that just being scary does not do the job. You have to move and you have to kill – or haunt and injure, at least, to hit the mark.

Annabelle is ‘demons after babies’ all over again; I guess demons must really adore babies…