Ten reasons why Pakistanis do what they do 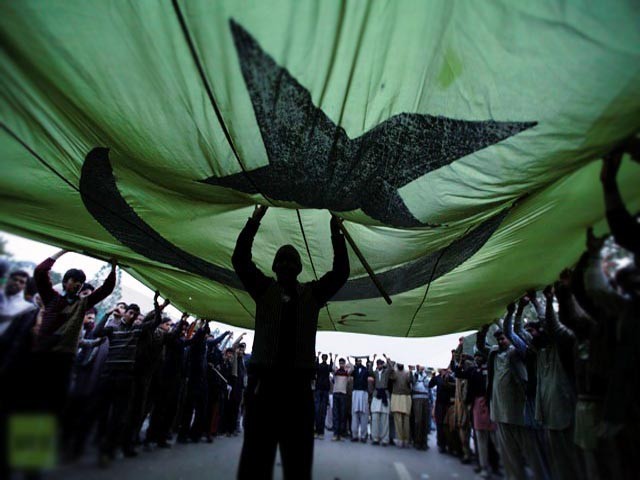 The precipitous progress that the country is displaying and the threat that this presents to the developed world has them grinding their teeth. PHOTO: REUTERS

Pakistan, ever since its inception, but even more so after the rule of Hazrat General Ziaul Haq, has been under the axe of western propagandists and bigots.

The precipitous progress that the country is displaying and the threat that this presents to the developed world has them grinding their teeth. Thus they target us rather unfairly and portray to their public an image of ours which cannot be far from truth. It is to undo their nefarious designs that I, perhaps for the very first time in history, yearn to exhibit a picture of Pakistan like it really is.

To this effect, a list of ‘ten reasons why Pakistanis should feel proud’ was compiled by yours truly, to best demonstrate to the world what we are capable of.

Pakistan has to be the most charitable nation in the world. We generously donate, towards the maintenance of public servants and public representatives alike. Our tendency towards giving alms to the poor, such as the impoverished policeman standing on the corner of the street, or the destitute Patwari sitting in the ramshackle of a room where he conducts his business before retiring to a very small thirty kanal farmhouse, is unmatched.

Next we hope to build a larger prime minister house to accommodate the growing ruling families, all of which seems to have devoted themselves to the service of the country.

We have a burning desire to treat all in an equal manner. The world at large compares our airports to central prisons (by the way, congratulations on attaining the first spot in the list of worst airports), only and only because they fail to see the rationale behind keeping it this way.

We staunchly stand for impartial and fair treatment to all, and it is for this reason alone that our train stations compare with slums, and our public hospitals with makeshift camps. We’re standing together with the IDPs you see.

Pakistani passengers board a train at a railway station in Lahore. Photo: AFP

Although a secondary reason to it is our environment-friendly policies and the wish to celebrate earth hour every day, but the major reason we have load shedding is to remind ourselves of the plight of the poor, who live without electricity.

Every time the chubby substation officer comes across a news story of a connection of a poor family being disconnected for failure to pay the bills, he sheds a tear in empathy and turns the switch. This ensures that the virtue gets inculcated publically.

The world lags in comparison to the technological advancements in Pakistan. Virtually all the rich and middle class houses of the country now own at least one very human-like robot that we call ‘domestic servants’. They neither eat nor sleep, and willingly act to the whims of the owner at every beckoning.

They take less than 5000 rupees a month to maintain, and are bred in the poorest of families, from wherein they are plucked. Some say they are moved by desperation, but this is an invalid argument, given robots don’t have emotions.

Only if Solon were alive today, he would have been pleasantly surprised at how closely we follow his ideals. From seven-year-olds to seventy-three-year-olds, all are equally well versed in the lessons of politics.

One sadly mentions the death of his dog and the other starts off with the rant,

“In Umar’s (RA) times he had stated if any dog dies at the banks of Euphrates..” to be cut short by the reminder that the dog had died a natural death.

Then the second interjects,

“Then woe by upon the government for failing to find an elixir of life,” takes off his shirt and waving it over his head, runs away.

An appreciation for music

Nero, unlike Nawaz, would have been a proud emperor to govern a nation so inclined towards music.

Switch to 8pm talk shows and you will find our politicians and self-righteous anchors forever busy in riazat (practicing of vocals). Go out on the streets and you will discover that from women buying clothes in inner city markets to the men buying fruit from the fruit vendors, all dwell in that practice. Sadly, it is always the higher notes that are favoured, but then again, these are the only notes we ever listen to.

There are a fewer instances that can be quoted of an occasion where the ruling classes so willingly took a bullet for the masses. In order to increase employment, they forsook their privacy and allowed a cohort of guards to throng them, under the shroud of VIP protocol.

This could have been done in private capacity as well, but that does not ensure job security. Therefore, a little of the public expenditure had to be utilised for the cause, all in good faith.

The predilection for sports

Imran is not the only indicator of how much we like the sports and sporting personalities. We have made games a part of our life to continuously remind ourselves of how much we love playing.

Be it ‘hide the sandals’ (strangely none have been able to find the same back) in mosques or the drag races to catch the signal on our streets, there are sportsmen are everywhere.

My personal favourite is the hardcore wrestling matches that are held between the police and the public at every sit-in and strike, with an entire story line building up the momentum and rating.

Britain had just one Robin Hood, and they have already made countless movies and TV series on him. We, comparatively, have innumerable Robin Hoods wandering around the streets of the bigger cities waiting for a chance to pounce upon an opportunity to serve natural justice.

They reconnoitre the roads, aware of exactly when the signal would turn red, and thus, just when you thought you could get away with the illegally and easily earned money and mobile phones, they would hold up a gun to your head and ask you to cough up.

These are the unsung heroes of the country, ensuring diffusion of wealth to the most wanting households, all without credit.

A proclivity towards homogeneity

And lastly, no list of achievements can be complete without the sacrificial lambs who willingly offer themselves up in quest for the ideals Quaid wanted. The champions of this cause stem from all sectarian, ethnic and religious minorities.

Knowing too well their own incorrigibility in not wanting to attain unity, they allow themselves to be slaughtered where they don’t fit in with the general public of the region.

You may hear stories of Hazaras or Baloch being murdered, of Shias being killed, or a general persecution of a Hindu, Christian or an Ahmadi– what you may never get to hear is the resolve of each of these souls allowing themselves to be killed to serve a grander purpose; the purpose of unity, that which could not be attained without first attaining homogeneity.

Disclaimer: The above piece is a work of satire and was not written with the intention to offend anyone.

He is a telecom engineer by profession. He annihilates kings (in chess!) for hobby and obsessively chases a small ball with a racket (in squash!) to stay fit. He tweets as @awaisasif8 (twitter.com/awaisasif8)