Will #HeForShe work for me, a man? 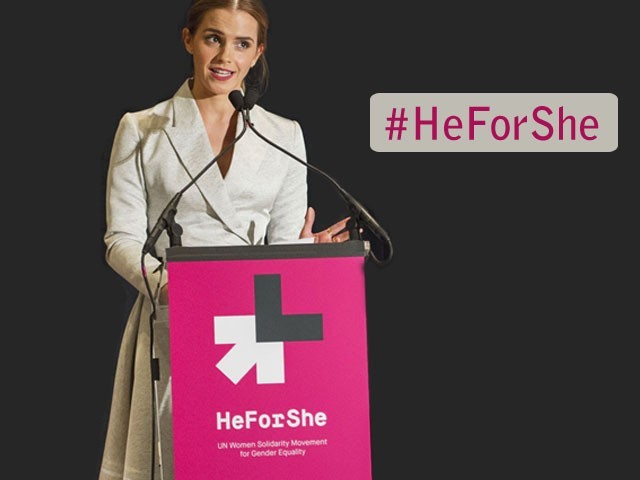 Emma addressed men and said that “it is your problem too” and indeed it is but a campaign named HeforShe is biased itself.

The recent HeForShe campaign by Emma Watson, the UN Women goodwill ambassador, has gained significant repertoire, with many men posting pictures on Twitter and Facebook with placards, articulating their support for the campaign.

The campaign speaks against gender violence and inequality. It is particularly a feminist movement and although it realises the bias against men, it does little beyond recognition. Emma herself stated that:

“The more I have spoken about feminism the more I have realised that fighting for women’s rights has too often become synonymous with man-hating.”

There is indeed a need for gender equality, and abuse against either should be equally condemned. Women are mostly the victims of domestic abuse, especially in developing and underdeveloped countries and in rural areas, and this should be accepted. However, men get abused too, and that should not be forgotten.

Denying women the right to education is also an endemic and should be addressed effectively through educational and social campaigns. But we also come across cases where boys and young men are forced to leave their studies to work and earn.

Women should have equal employment opportunities, yes, but recently, voices have been raised for female preference in certain position as opposed to men or, simply put, efforts for gender preferential employment against men have been supported by some women. How does that workout for the gender equality campaign?

Equality is a vague and rather broad term that doesn’t always necessarily address the intrinsic characteristic of the two genders.

There is a need to prevent gender abuse and inequality, which is a two-way fold and shouldn’t highlight one gender over the other. Emma addressed men and said that “it is your problem too” and indeed it is but a campaign named HeforShe is biased itself. When it comes to ‘equality’, there are certain idiosyncrasies and physiological characteristics that must be kept in mind.

Women are subject to preferential treatment in a number of instances and rightly so too.

One such case would be when a woman is bearing a child, which is a natural phenomenon. Women bear excruciating pain, physical hardships and emotional difficulties in the process, which is an enormous undertaking but the role of men and their partners shouldn’t also be ignored. In progressive, well educated and developed societies, men are the prime support systems for women while undergoing the troubles of bearing a child. They offer emotional, psychological and physical support throughout and play a vital role in preserving the physiological and psychological wellbeing of women.

However, women are granted maternity leaves for months while men are not subject to any such relief for their support and role through this process. Similarly, women are allowed preferential working hours in organisations to accommodate for them raising children under a certain age but men aren’t.

The question then arises that does equality mean abolishing these allowances for women or granting men similar provisions?

One cannot deny the fact that women are abused and often aren’t even involved in the family planning decisions, in rural societies and underdeveloped localities. Even their physical wellbeing is not a priority for the family for the need of an heir – this is gender abuse and women should be an equal partner in the decision.

But how is the campaign supposed to work here? Will it focus on the developed, progressive model where men help women or the underdeveloped model where women do not have equal say? And if it chooses a particular setting, will it ignore the other?

Also, I for one, like opening doors for my mother, sister and female friends, offering them my jacket if they’re cold and performing other ‘minor’ acts of chivalry for them. Does equality then call for abolishing these chivalrous acts by men for women or would it be acceptable the other way round too?

Maria Sharapova raised voice for equal prize money in Tennis for Women and Men championships, the basis for which was simple: ‘equality’. However, she did not consider equal attendance, popularity or even ratings as a factor, leaving the argument very vague. Ratings, attendance and popularity of men’s tennis are far greater than women’s tennis for reasons beyond gender bias. ATP is followed extensively while Women’s Tennis Association (WTA) fails to attract the same level of popularity or viewership.

Equality alone, therefore, is vague and notwithstanding of certain characteristics for both genders. The need then is to stop ‘abuse’ and ‘unsubstantiated preferential treatment’ for one gender over the other. This is what the HeForShe campaign should be about.

An export manager for a textile industry in Europe who enjoys sports, particularly tennis, and loves to travel. He tweets @SDaniyaal (twitter.com/SDaniyaal)

Davis Cup 2014: There is no beating Roger Federer