What is Abdul Sattar Edhi going to do now? 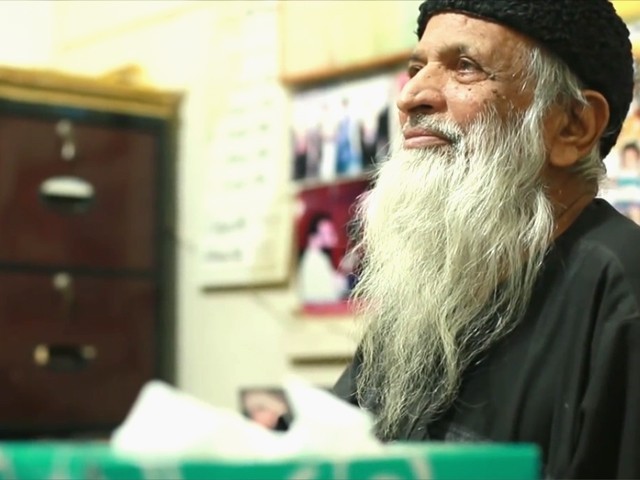 And so it goes. Edhi abbu he is. A father figure for Pakistanis. PHOTO: Screen shot from ‘Seerat 4: Philanthropist – Abdul Sattar Edhi – by Ali Kapadia’

There’s something about Abdul Sattar Edhi that makes Pakistanis feel safe… almost protected, like a child feels with a parent around. He is old and frail and sickly. But he is there. He is alive. And till he is alive, we have hope. We have hope that goodness prevails, and that there exist those we can look up to.

With Edhi around, we have an elder.

This August 14th, I happened to celebrate Pakistan’s Independence Day with children from the Edhi home who were attending an event held for them.

“Edhi abbu got us these clothes for Youm-e-Azadi,” said a 14 year old, smugly flaunting a bright green shirt and white pants and shoes, the pants with bits of grass and soil smudged on to it as the kid was sitting on the lawn.

And so it goes. Edhi abbu he is. A father figure for Pakistanis.

The man is one person the country’s leftists and rightists and centrists agree on. Thus, Edhi has done more than raise abandoned babies and feed the hungry and lift laawaris laashain. He has not built bridges – he IS a bridge in an otherwise exceedingly polarised society. Pakistanis are like estranged siblings a lot of times; we are united in our gratitude towards Edhi abbu.

The common responses to Edhi and his staff being held on gunpoint and looted of gold and cash worth around Rs 30million had reactions that went like this:

“ Edhi Sahab we don’t deserve you.”

“May those who did this to you rot in hell.”

The most heart-wrenching was him saying in an interview,

The nation’s intelligentsia and literati are still reeling from the post-Noble Prize discussions over whether Malala deserved the prize or not. And those who were from the Malala camp saw this as an opportunity to even scores with those who had dared to question the young girl’s win and had dared to say that Edhi would have been a more deserving candidate.

“Why don’t all those who wanted Edhi to win make up for his loss now?” was a common sentiment on the vent-ground called Twitter.

But then, what do we expect from a people that have been through what Pakistanis have?

The marauders, mind you, were a sample part of the whole. And the whole has suffered, and continues to. There is corruption, insecurity and a lack of governance and that is costing us lives, honours and sanities.

A few examples stating the obvious: we lose 92000 children annually to Pneumonia because they do not have access to a vaccine that can save them. In the last one month we have seen 40 plus new cases of Polio. In 2013, 1600 plus Pakistani women were killed in the name of honour. Just last month, a girl withdrew charges of gang rape against a minster’s sons. Our maternal mortality rates are almost the highest in the region. Some one million IDPs have dimming hopes of returning home before harsh winter sets in. Our mothers kill their children and commit suicide as the hunger is too much, and at the other end our affluent class bathes in wealth. Our politicians continue to pledge service to the masses in public, and continue to spew powerful narratives that fuel anger. Ironically, Bilawal Bhutto Zardari’s Karachi jalsa and the promised historic speech was hours ahead of Edhi Sahib being looted, and was a case in point.

We are an angry, intolerant nation. And those dacoits were a part of us. Why, then, the naive surprise? They saw money, and they decided to loot it. It was may be too trusting of Edhi Sahab to think they would not do this to him. He should have learnt a thing or two from our political leaders and kept the money somewhere no one can touch it. Money is money. It’s tempting, everyone wants it, and is out to get it. And in this quest, they are not even going to spare a man who is an emblem of humanity.

So what is Abdul Sattar Edhi going to do now?

Well, he is going to do exactly what he has been doing. He will pick up the pieces of a broken heart, and continue to try and put in his share of healing the aches and pains of humanity, as a good Pakistani and as a human par excellence. If we have any respect for him and have learnt anything from him, then we must do the same. We cannot let hope wilt, and cannot become jaded cynics saying “nothing’s going to get better”.

I can make myself better, can’t I?