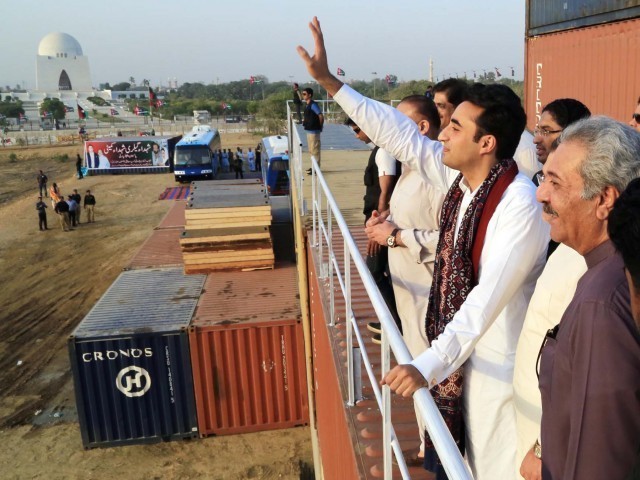 One does not have to be an Imran Khan fan boy to realise what is wrong with Pakistan and its ruling class. The primary reason Imran’s message has resonated with the masses is due to their longing and need for this current system to “change”. Today, as the Pakistan Peoples Party (PPP) prepares to throw one awesome party of their own, I doubt if that “change” will have anything to do with them. It seems that this dog is not willing to learn new tricks at all.

It is beyond comprehension, in a country where the capital has been besieged by two political parties for over two months now, how one political party has shut down the largest city in Pakistan for just one rally. Roads blocked, shops closed, the entire city at standstill as Prince Bilawal Bhutto Zardari comes of age. Certain inconveniences are taking place in Islamabad, no doubt, but the scales are not comparable.

The Sindh Government has blocked almost all major roads and, till yesterday, had even planned on declaring a provincial holiday and suspend mobile networks. Again, let’s not forget that Pakistan Tehreek-e-Insaf (PTI) and Pakistan Awami Tehreek (PAT) have been at this for two months, while the PPP rally is yet to even take place. As I write this, the helicopter is en route to the venue.

Leading up to this so called historic gathering, Karachiites have also seen every billboard in the city and major landmarks painted green, red and black, adorned with photos of Zulfikar Ali Bhutto, Benazir Bhutto and Bilawal Zardari himself. One can only wonder what percentage of all this marketing expense came from the Sindh exchequer and from the pockets of the residents of Sindh, and for how long PPP can rely on these faces and not their track record to gather crowds and hold political ground.

Regardless, it is truly unfortunate what has become of a party that claims to represent the rural and lower class of our country but ends up only highlighting what is wrong with us – dynasties, corruption and ignorance, to mention a few.

Has PPP already forgotten what took place on that plane when it decided to wait for Rehman Malik?

Are they as oblivious to public sentiment as our national government is?

Notwithstanding what Bilawal Bhutto Zardari’s speech might comprise, the precedent that has been set in the making of his first major, political address reaffirms the fears of those that support the system and Constitution of Pakistan and fuels the fire of anarchism and disruptive forces presently rampant throughout the country.

There is no change here.