Should she have declined the Nobel Peace Prize? 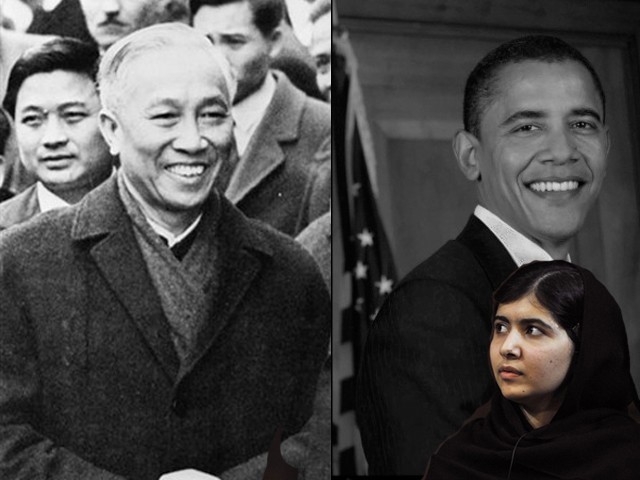 Should she have refused the Nobel Prize, taking the higher moral ground that she did not really deserve it, in light of the criteria for the prize as mentioned in the first paragraph above? I know if I was in her position, I would probably not have declined.

The Nobel Peace Prize is given to those who have “done the most or the best work for fraternity between nations, for the abolition or reduction of standing armies and for the holding and promotion of peace congresses”.

I wonder which work of young Malala Yousafzai fell within any of these three criteria.

To be fair to her, Malala did not ask for the Nobel Peace Prize, nor did she lobby for it. In all probability, her handlers did, because for them, it was the crowning glory of the agenda they have been pursuing through her ever since she was whisked away from Pakistan. Intelligent as she is, I wonder if the thought has ever occurred to her for even a moment that she is being exploited.

For me, Malala was a precocious, innocent and sensitive Pakistani girl. I believe her intentions then and her intentions now are unquestionably… noble. No pun intended. What I also believe is that once she was taken abroad for treatment, she was methodically and professionally put through a process whereby someone else took control of her still formative thought-process. Someone else has bewildered this girl with their effusive caring, their apparently selfless intentions and their meticulously planned and executed promotion of her at forums which would enchant even the most urbane adult.

Pakistan actually lost Malala the day she left these shores. And this is what I lament; not her winning the Nobel Prize whereas it should have gone to someone else, but the fact that we have lost her to the machinations of the international establishment. The West has projected through a brain-controlled Malala that the Taliban are against girls’ education and that it is a rarity in this country. Take a look at the accompanying photo. Is this girl in a government school uniform, taking two other girls to or from school, riding a bike to or from school, any less determined to promote girls education than Malala?

So by creating a specific perception internationally, Malala’s handlers have projected that the war against the Taliban is justified. Hence the drone warfare is justified. If thousands of innocent civilians get killed in the process, well that’s just collateral damage we have to live with, isn’t it? These people must be guzzling the bubbly in celebration even now, for the monumental PR coup they have pulled off. Pakistan is debased as a failed state globally, while Pakistanis are neutralised lest they react, by arranging the Nobel Peace Prize for a daughter of Pakistan.

Yes, Taliban are against female education, but they are a minor impediment. The real enemies of girls’ education have been successive governments who allocate a pittance for education in the annual budget. The real enemy has been the apathy of civil society, of people like you and me, who are now singing Malala’s praises but have personally done little if anything for giving the underprivileged, girls or boys, the opportunity to get educated.

Should she have refused the Nobel Prize, taking the higher moral ground that she did not really deserve it, in light of the criteria for the prize as mentioned in the first paragraph above? I know if I was in her position, I would probably not have declined.

Only one person has ever refused to accept the Peace Prize – North Vietnamese leader Le Duc Tho, who was awarded the 1973 Nobel Peace Prize together with Henry Kissinger for their roles in brokering a Vietnam ceasefire. Tho declined to accept the award, saying actual peace in Vietnam had yet to be achieved. US Secretary of State, Henry Kissinger had no qualms accepting it, even as the US was carpet bombing Cambodia at the very same time.

That’s not all. Before, during and after his acceptance of the prize, Kissinger would be implicated in assassination, war crimes and the slaughter of civilians in a number of countries – East Timor, Pakistan, Greece, Cyprus, Chile, Argentina, Cambodia, Laos and Vietnam. He was also a part of the alleged US complicity in ‘Operation Condor’, a mid-1970s campaign of kidnapping and murder, coordinated amongst the intelligence and security services of Argentina, Bolivia, Brazil, Chile, Paraguay and Uruguay. Two Norwegian Nobel Committee members resigned in protest at Kissinger being awarded.

Is the Nobel Peace Prize anything more than a “thinly veiled political statement it invariably makes”, as the Times of India has written? Has at any other time, the citation for the Prize drawn specific attention to winners’ religions as it has done now? Are Malala’s ‘achievements’ equal to those of the co-winner, Indian children’s rights activist, Kailash Satyarthi, pursuing his mission for 34 years since 1980, and reportedly freeing over 76,000 children from child labour? Should he not have been the sole winner?

The Nobel Peace Prize, however, has not been without controversy. Some previous examples entail:

The 1992, The Nobel Peace Prize was awarded to Rigoberta Menchu, for “her work for social justice and ethno-cultural reconciliation based on respect for the rights of indigenous peoples”. The prize-winner’s memoirs, which had brought her to fame, turned out to be partly fictitious.

In 1994, the Nobel Peace Prize was shared by Yasser Arafat, Yitzhak Rabin and Shimon Peres for the Oslo Accords. Of these, Peres was a man who started several wars. He also played a major role in helping apartheid South Africa procure weapons when it was under an international embargo. Yet, Peres was one of the winners and Mahmoud Abbas, who had signed the Oslo Accords together with Peres and had worked for years towards Palestinian-Israeli peace, was ignored.

The 2010 Prize went to Chinese dissident Liu Xiaobo, for “his long and non-violent struggle for fundamental human rights in China”. Liu was perhaps also a ‘brand ambassador’ of the international establishment, for earlier he had participated in organisations that received funding from a US organisation.

Then the world gasped in shock when Obama won the prize in 2009, for “his extraordinary efforts to strengthen international diplomacy and cooperation between people”, at a time when he had been in office just eight months! The New York Times euphemistically called it “a stunning surprise”. And since winning the award, Obama’s peace-promotion record includes signing the National Defence Authorisation Act into law, making it legal to indefinitely detain US citizens, increasing deadly drone strikes in Pakistan and Yemen, waging a war in Libya, escalating the war in Afghanistan, and to top it all, a secret “kill list”, revealed this year by The New York Times, which grants a select few American officials the option to mark perceived national security threats – foreign citizens or otherwise – for assassination.

We talk about the sinister and nebulous, yet ubiquitous, ‘establishment’ being behind all conspiracies in Pakistan. Well, then certainly there is an international ‘establishment’ too, perhaps even several, pursuing an agenda that seeks to maintain and enhance world domination by certain countries. This international establishment fights its wars on several fronts. For example, the military front, in which a sovereign country like Iraq, can be invaded, taken over and ruled for 10 years, with a million citizens dying in the process, all on the basis of a lie about weapons of mass destruction.

Perhaps this establishment can resort to an economic war, with trade barriers, boycotts, sanctions, freezing of assets and what have you. A third avenue is a political war, fought one on one, or in the guise of a coalition, or even through controlled international organisations.

Whichever route is taken, the guiding principle, time-tested from early colonial days, is ‘divide and rule’, applied in a variety of ways. This causes a lingering friction between different ethnicities of a target country, create class-based divisions within one nation, or select, groom, glorify and skilfully exploit ‘brand ambassadors’ from within a target country, to credibly and widely disseminate your messaging, and try and create mass support for it.

Remember Mukhtaran Mai, the darling of the West not so long ago?

She suffered a level of debasement which no one should ever suffer. The West took her over, projected Pakistan as a country no woman is safe in. Then Mai, having served their purpose, disappeared from public discourse. Is rape endemic to Pakistan? Did you know that there are about 90,000 rapes in a year in the US? That’s about 250 rapes every single day. And that’s only the reported ones.

Another example is Aung San Suu Kyi, built up by the Western media into a Gandhi, till she got the Nobel Peace Prize, which incidentally was never given to Gandhi. Something that all agree has been the Peace Prize Committee’s greatest ever failure. But I will forever remember Suu Kyi for her deafening silence over the atrocities unleashed on Rohingya Muslims, on which the CNN queried, “has the Lady lost her voice?”, and The Guardian wrote,

“It seems impossible to resist the impression that ‘the Lady’ is a paragon no more – and certainly no human rights defender.”

Now if promoting female education is the criteria for winning the Nobel Peace Prize, and if the process is fair, transparent and with no hidden agenda, then may I be permitted to say that the winner should have been The Citizens Foundation (TCF)? This education non-profit organisation has established over 1,000 schools across Pakistan in only 16 years and is educating about 150,000 students, half of whom I dare say, are girls.

Not to mention the thousands who have already passed out, many going on to get higher education, even at Harvard, and countless having taken their families out of poverty and going on to become responsible and useful members of society. If 22 organisations can be awarded the Peace Prize previously, why not TCF now? Because no one from TCF was orchestrated to speak at the United Nations (UN), or spend some time with President Barack Obama, or have an audience with the Queen of England?

Anyway, what I wish now is for Malala to grow up still remembering her roots, understanding the world as it really is, finding out even who created those very Taliban she is fighting against, forming her own ideas on how her mission should be followed up, and finding friends and supporters within her own people.

I want Malala to come back to Pakistan to actively pursue her mission. I want Mr Naya Pakistan to guarantee her security. Surely he can do at least this for her, if he is the one to bring radical betterment as he professes. I want her to donate her prize money (she is already a millionaire without it) to TCF, for without any doubt, this organisation is doing the most for female education than anyone else, individual or organisation.

And to all self-proclaimed and vociferous Malala supporters, I say, please do something else for her mission than just trying to outdo each other in extolling her. Otherwise, like Mai and others, Malala and her mission too will soon be forgotten by the very country she took a bullet for.

The writer is a communications professional, a passionate wild-lifer, an ardent traveler and a published author. He can be contacted at [email protected]

Corruption in Pakistan is not limited to politicians

Aansoo Kohli: A candle in the wilderness, a teardrop of inspiration