The fault in our (cricket) stars 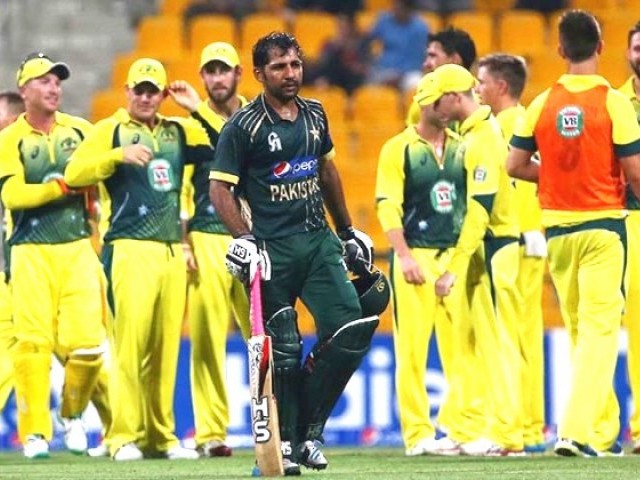 I walked into the house to the sound of my father yelling and shouting. 99 out of a 100 times, it’s usually because of something my brother had done. But when I entered the house hearing both of them bellowing, it could mean only one thing – the Pakistan cricket team had failed… yet again. And what a time it was to lose.

With the World Cup only a matter of months away, the Pakistani team could not have chosen a worse moment to be whitewashed, literally, by the host team of the forthcoming tournament.

The issue is not that they lost, rather the manner by which they accepted defeat. A common thread can be drawn from the recent matches that Pakistan has played. In the first ODI, Pakistan’s batting collapsed to 162. In the second ODI, after an opening stand of 126, Pakistan succumbed to a mere 215 and Australia won with half the side to spare. In the last and most humiliating ODI of the series, Pakistan failed to make a couple of runs in the last over and handed the ODI series whitewash to the Aussies. The common thread is easy to spot now – the fiasco of the Pakistani batting order.

This isn’t the first time we’ve seen the Pakistani team choke before a huge event. In December of 2002, Pakistan lost a 4-1 series against South Africa, just a couple of months before the main event of 2003. We all know how that went down (moment of silence). Just to keep the saying ‘history repeats itself’ alive, Pakistan lost another series to South Africa in the February of 2007, just one month before the humiliating elimination of the team from the 2007 World Cup in West Indies (another moment of silence for the team as well as Bob Woolmer). Not to sound like a pessimist here though, but the odds sure don’t look in our favour for the forthcoming world event.

As a poet once said,

The Pakistani team has certainly fallen. With Ajmal in doubts of returning, and Mohammad Hafeez also being questioned for suspect of action, things don’t look so bright for the men in green. The current whitewash has damaged the spirits of the team, but most importantly of the nation. The nation that deems its players national heroes, conquerors of their hearts, champions of their worlds have been let down more times than necessary. Within seconds, these heroes turn into villains and heart breakers.

The national team needs to realise this by now.

Now, you may disagree with Imran Khan’s politics, but the man knows his cricket. More often than not, he has come out and said that the Pakistani team can never win with such a defensive attitude. Their attitude of ‘fearing losses’ limits them from winning. That is exactly the kind of behaviour we saw in this series. I mean, if you’ve lost the series, that doesn’t mean that the captain should sit out of the final game. That’s a loser’s mentality, proving Khan’s theory exactly.

Maybe we need a more aggressive approach. I’m not necessarily saying make Afridi captain again, although the chances of that seem more reasonable at the moment, I’m just saying move things around. Come back with a progressive approach, a breath of fresh air. Albeit, seeing Akmal out finally gave Sarfaraz that whiff of air he needed. Maybe we need more shuffling of that sort. But this conundrum of confusion in the team has to stop to open up opportunities for the future.

“The fault, dear Brutus, is not in our stars. But in ourselves, for we are underlings.”

At this point, we definitely think of ourselves as underlings; a subordinate class of cricketers not fit for the World Cup. But the faster we clear the faults within ourselves, the more accomplished our future will be. The Pakistani team still has an ample amount of time to fix their mistakes. Two more series are coming up, prior to the World Cup, both against the host teams and at the venues of the awaited world event. They can still turn things around and repress their mistakes, capitalise on their strengths and pull this low self-esteemed nation back up to its feet so they hope again, as they have always done.

In a matter of months, I want to step into my house with loud cries of joy and excitement, hearing words of encouragement and praise while my father and brother back the green shirts in their pursuit of the golden cup and at the highest spot of rankings.

It has been done before, and it can be done again.