Dear Iran, self-defense is not murder 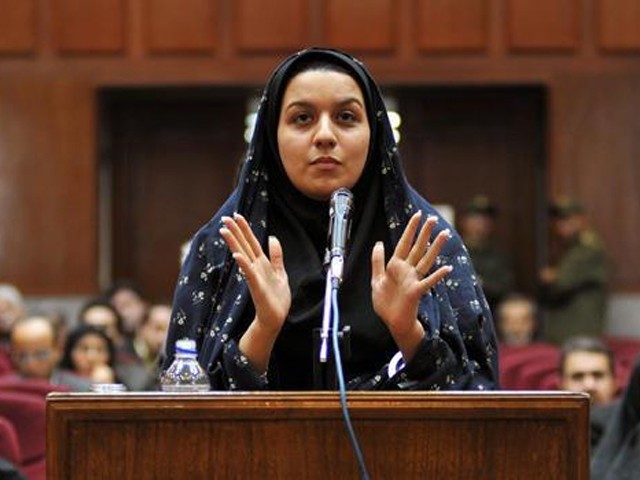 Jabbari speaks in court in 2008. She stabbed her attacker to death after she alleges he raped her after luring her to an office with the promise of work. PHOTO: AFP

The world celebrates and praises Malala Yousafzai – a Pakistani girl whose claim to fame was a bullet to her head, her fault being her desire to seek education – and while the world talks of empowering women, the world is perhaps ignorant of the plight of another young woman fighting for her life in neighbouring country, Iran. This brave, young woman happens to be 26-year old Reyhaneh Jabbari who can be put to death any time now, as her 10-day delay in execution ended last Wednesday.

Her crime was stabbing a man to death, a man who tried to rape her.

It was in 2007 that Reyhaneh, an interior decorator, was approached by a man who called himself Morteza Abdolali Sarbandi, a former employee of Iran’s Ministry of Intelligence. Sarbandi asked Reyhaneh if she could decorate his and his friend’s office, to which Reyhaneh agreed. When she got to his office a few days later, she was welcomed by a dusty, empty apartment and Sarbandi. Smelling a rat, Reyhaneh tried departing, but was stopped by Sarbandi who asked to “take off her scarf”. Reyhaneh resisted his advances as much as she could but Sarbandi got hostile. In her defence and sensing immediate danger, Reyhaneh made a run for it, but a fight soon ensued and she got her hands on a knife, which she used to defend herself. But as Sarbandi’s attacks got stronger, so did Reyhaneh’s, which is when she stabbed him and managed to escape. However, her ordeal was not over yet. Around 2am, she was traced, arrested and charged with murder.

For six long years, the Iranian government has overlooked the fact that Reyhaneh was facing imminent molestation as even evidence proved it – a plastic bag was found in Sarbandi’s possession containing condoms and a drink laced with sedatives for his victim. Yet, Reyhanheh was charged with murder and would have been executed some 13 days ago had it not been for a 10-day delay which is now over, putting her once again in immediate danger.

The verdict: she had no witness, and she must be executed for murder. Reyhaneh may be forcibly put to a wrongful death anytime for a fault that was far from hers.

How flabbergasting is it that despite the evidence that proves Reyhaneh innocent, the Iranian Judiciary still continues to dismiss her pleas because she had no witness?

Reyhaneh’s story is the story of countless other young women around the globe who face charges of adultery and murder for defending themselves. Self-defence is blatantly labelled as adultery, provocation, guilt, and every other thing that it is not. Why is the production of a witness incumbent upon the victim when all evidence points to her innocence?

What is even more surprising is the response some people have offered in defence of the Iranian government. Some say that if the man had been alive, he would have been hanged for attempted rape, the woman did kill him and therefore she needs to pay the price as the law demands. Some people say she shouldn’t have killed the man and then he would have been rightfully hanged. Hence, some people are suggesting that she made a mistake when she saved herself from rape.

What guarantee can these people offer that the man would have been hanged? The judiciary plainly refuses to believe that Reyhaneh was on the verge of being raped because she had no witnesses. Would the judiciary have believed her if Sarbandi had been alive? Wouldn’t people have accused her of adultery and had her stoned to death instead?

What is not surprising is that a majority of the masses blame Islam straight away. Of course, in a world generally spiteful, hating on a particular religion has become a norm. People put the blame gleefully on Islam whether it is the rape of Mukhataran Mai to the ban of women driving in Saudi Arabia.

Of course, as usual, these people have no idea that Islam has nothing to do with it. Yes, the Iranian government is an Islamic one, but the execution she faces is the verdict which the judiciary gave, not Islam.

Simply put, rape laws need to change. Four witnesses might have been a necessity in the old days when there was no DNA testing technology and no science of deduction, but today when it is possible, witnesses don’t matter. Apart from the fact that nobody rapes a woman in front of four male onlookers, whether a woman was raped or not should not be decided by the number of witnesses she has to offer.

If Reyhaneh is executed because she defended herself, Muharram will come early this year.