PTI, stampeding its way to democracy? 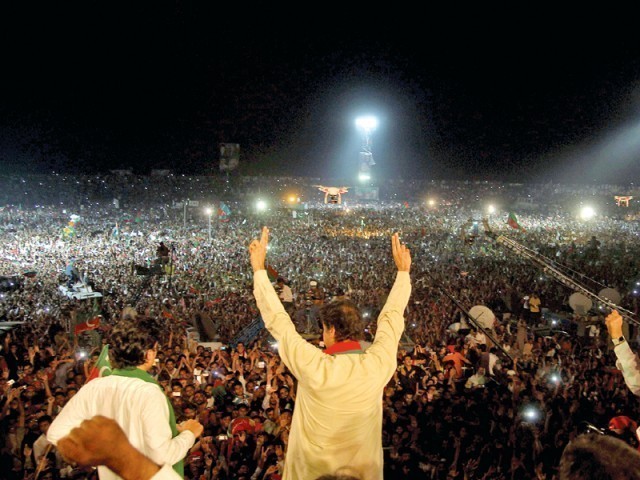 Imran Khan gestures to supporters at the PTI rally in Multan. PHOTO: AFP

Imran Khan’s Multan rally, in which seven people died and more than a 100 were left wounded, has Pakistan Tehreek-e-Insaf hopping mad, as expected. Not only has the party suffered a blow of embarrassment in front of their workers, the incident has also provided the media with enough ammo to criticise the party for their faulty arrangements and planning.

The government, apologetic as expected, has immediately put together another one of its bootless, good-for-nothing committees to conduct a more or less useless ‘probe’ into the matter. However, if one just views the situation objectively, despite the culpable reasons such as closed gates, unexpectedly greater number of people, and the disconnected electricity, the fact of the matter is that this was an incident asking to happen.

As expected, there is a blame game going on in full swing between Imran and the DCO Multan, Zahid Saleem Gondal. Imran claims that only two gates of the venue had been opened instead of all of them. Gondal says this was for security reasons. As for the lights, Gondal washes his hands off entirely, asserting that the stadium was exempted from load shedding and it was the PTI organisers who had turned off the lights as soon as the speech was over. Adding insult to injury, Gondal says that they actually saved lives by hosing water on the wild and unmanageable spectators otherwise the death count would have been greater. On the face of it, it seems that each party is conspiring against the other. However, putting the juicy conspiracy theories aside, the main question is why was there such a ‘savage’ stampede at all?

Whether on the wheels of notoriety or fame, Imran’s dharna is now nearing its two-month birthday. In essence, his loyal followers around the country have more or less put their lives on the side, waiting with baited breath to watch it succeed. With every passing day, their impetus for ‘Go Nawaz Go’ is spurred by Khan Sahib’s invigorating speeches where he makes rigorous promises, nothing short of a covenant for a new Pakistan. The fiery passion and energy of his workers is given a daily shot of adrenaline and they start the day to finally see these pledges materialise.

A large number of the devoted and faithful are even following Imran around on his city rallies too. However, much to the chagrin of these truly devoted, despite all the crazed and hysteric enthusiasm injected into them by Khan Sahib, the verbal gunpowder alone has yet to make Nawaz ‘go’. All this gradually increasing frenzy had to find a way out. And it did in Multan. The pent up hysteric aggravation is one of the outstanding reasons why the stampede occurred, turning the crowd into a crazed mob that set all rationality aside as they thundered over live bodies to get out of that stadium. Seven may be a small number but given the fact that there was hardly any reason for these youth to have died at all, it is one too many.

What Khan and Tahirul Qadri need to realise is that as time elapses and their sit-ins remain ‘all talk and no play’, the workers are bound to create ‘play’ for themselves. This was also seen when they attacked the PTV building during the early days of the Islamabad rally. Again, this too was a totally mindless and uncalled for act, which of course was sheepishly denied by both dharna leaders. In the case of the Multan stampede, the incapacity of the government was the match that lit the fuse to the bomb waiting to explode. Also, as per laws of human behaviour, the selected venue had a lot to do with encouraging the crowd to vent its frustration and hysteria in the manner that it did.

Research shows that crowded stadiums contribute to anxiety in the attendees, especially when they are standing and not sitting. The closed in environment of stadium like spaces makes them feel like their personal space is being violently invaded. Also, when large crowds in enclosed spaces are standing, as opposed to sitting, they become more agitated and active as the speech progresses. This agitation is commensurate with the nature of the speech given. In the case of Multan, the speech, the music, in fact the entire atmosphere was tailored to make blood shoot through the veins of the thousands of ‘revolutionaries’ who were present. The ambience, hence, became a crucial precipitate to the ensuing stampede to get out of that frustrating space as soon as possible. Even if it meant running out helter skelter without a thought to who was getting trampled to death in the process.

Another important tendency of large crowds is that they easily assume a collective conscious, more commonly known as mob mentality. They are likely to easily lose their sense of right or wrong and tend to act on the collective cue. In this case, a very small example is seen when thousands present in the jalsas collectively chant ‘go Nawaz go’. It is likely that the same people would not be chanting this if they were with four or five friends or out walking on the street. It is important to refrain from igniting the passions of a very large crowd because since they are in large numbers, they feel that their number is greater than that of the controlling force or police and thus are more powerful. If such a rowdy crowd gets out of hand, it becomes uncontrollable even by the commander-in-chief. And the most common activity such a violent horde engages in is destruction of property.

Even by standard of educated crowds, this behaviour can get difficult to manage and control. In the case of our famous and still continuing sit-ins in Pakistan, if this mob mentality, with all the pent up frustration of the past two months explodes, then Mr Khan and Mr Qadri could have major commotion on their hands with free-for-all vandalism as one of the serious repercussions. Where seven deaths occurred in Multan, still too many to ignore, it could get worse if a resolution is not reached pretty soon. It’s time to stop pointing fingers at each other over Multan and it’s high time to call it a day, one way or another.