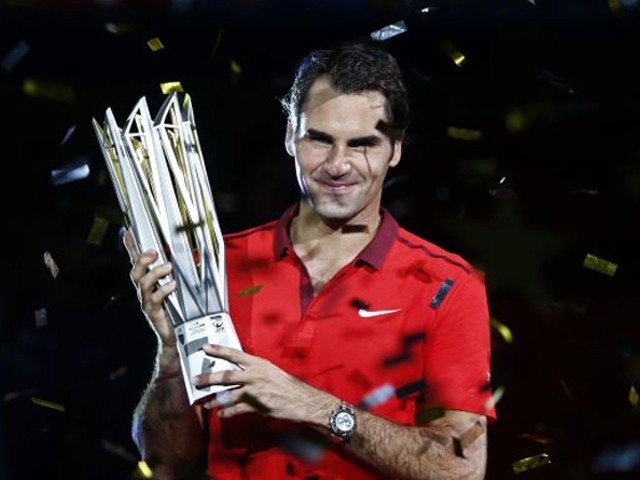 Roger Federer of Switzerland poses with the trophy after winning the men's singles final match against Gilles Simon of France at the Shanghai Masters. PHOTO: REUTERS

Roger Federer – living legend and tennis’s Greatest Of All Time (GOAT) according to many – has defied the odds yet again at this year’s Shanghai Rolex Masters 1000. This title takes Federer’s total tally of Masters 1000 titles to 23, covering eight different tournaments.

Most people wouldn’t find this newsworthy, considering they have heard of Federer’s magnificence in the game and, for them, Federer winning another title isn’t really a big deal. But this win is a very significant achievement for him, given the maestro’s struggles last year. In 2013, he struggled to even qualify for the World Tour Finals and had a dismal record of 45 wins to 17 losses; this year, he has already recorded more than 60 wins with three more tournaments to go.

Last year, while he was stumbling in his game and couldn’t find his bearing, people were quick to jump to conclusions, passing comments that:

“His time has passed.”

“His conventional and orthodox style of play can no longer compete with the heavy spin baseliners.”

“Age has caught up with him.”

And the list for these baseless criticisms goes on.

However, few realised that Federer had been struggling all year long with a back spasm – a rarity given his clean health sheet throughout his career – and it had restricted his movement and his practice routines, thus rendering him ineffectual against players he would usually beat without breaking a sweat. But Federer showed everyone that giving up is not in his dictionary. He refused to take time off and kept playing and losing, but never gave in, and eventually, by the end of last year, his health began to improve and he started posting ‘better’ results.

Federer’s assent to his maiden title in Shanghai was dramatic, to say the least. His first match against Leonardo Mayer got saved by a fortunate net cord. Some would call it divine intervention as well. Federer himself claimed that particular match as his “luckiest win ever” and conceded that the win was still in the back of his mind while he played against Novak Djokovic in the semi-final.

Federer, after having saved five match points in his first match, looked unstoppable. He got more comfortable in his second match against Roberto Bautista Agut and was impeccably ruthless against Julien Benneteau, whom he baggeled in the second set to win 76-60.

No matter how dominant Federer was in his earlier showing at Shanghai, few would have predicted his incisive performance against Djokovic. His game in the semi-final on Saturday was one of the finest displays of serve, volleying and aggressive net play in recent history and left many doubters dumbfounded at its finesse and effectiveness against a very athletic and nimble Djokovic. Djokovic confessed, in his post-match press conference, that Federer had played the “perfect match” – and indeed, he did.

The final against Gilles Simon was less than ‘perfect’ but showed Federer’s improved mental robustness when he came back twice; once from a game down in the first set and a mini break-down in the tie breaker. Though Federer wasn’t as dominant in the final as he was in the semi-final match, he was determined and effective in maintaining continuous pressure on the Frenchmen and continued his relentless onslaught to an eventual 76-76 win.

This year has been a complete turnaround from the last one. Federer has made it to nine finals and won four titles, including two Masters 1000 and a 250 and 500 level tournament each; not to mention the epic Wimbledon final against Djokovic where he made one of the most astonishing come backs in the fourth set to nearly clinch the title from Novak, only to be denied by the Serb in the fifth set.

At 33 years of age, Federer still has a spring in his step and has continued to play scintillating tennis; not only a treat to watch but also a tribute to the bygone era of serve and volley. It’s a pleasure watching the Swiss play on court every time and should be relished. I, for one, am sure I won’t be seeing anyone close to his finesse, fluidity and exquisite style of play in my lifetime again.

Let’s enjoy it while it lasts.

An export manager for a textile industry in Europe who enjoys sports, particularly tennis, and loves to travel. He tweets @SDaniyaal (twitter.com/SDaniyaal)

Davis Cup 2014: There is no beating Roger Federer

Will #HeForShe work for me, a man?