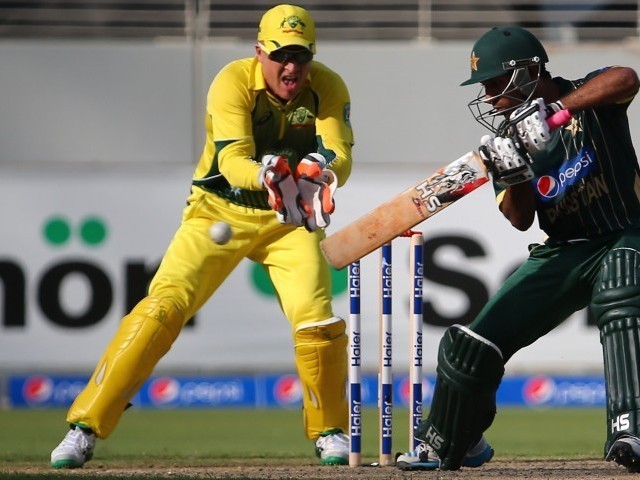 Pakistani batsman Sarfaz Ahmed plays a shot during the second One Day International between Pakistan and Australia in Dubai, on October 10, 2014. PHOTO: AFP

A lot has happened in Pakistan cricket over the last two decades. Teams have been shuffled around, captaincy has been tinkered with, the management has been a chaotic mess, the administration is a shambles, so on and so forth.

A lot has changed; however, if there’s one thing that has remained synonymous to Pakistan cricket for years now, that is our batting woes. The predictability is so obvious that it’s almost becoming funny now. The best way to gauge public sentiment about Pakistan’s batting is to observe comments, tweets and statuses on social media when we’re chasing – be it a 250 plus target or even a mere 150 odd run-chase.

We’re never confident. Never. It has come to the point now where most of Pakistan cricket fan base has accepted the team’s batting frailties as a part of its DNA. It has become a characteristic of Pakistan cricket that will, perhaps, and rather unfortunately always, be there.

Over the last two decades however, it hasn’t been all doom and gloom.

Where on the one hand, we had miraculously failed to find a half decent opening batting pair since Saeed Anwar and Aamir Sohail, on the other, we knew we had a middle order that would, very frequently, bail us out and do the rescue job. Going back only a few years, we had the legendary Inzamamul Haq, the stylish Mohammad Yousuf and the very formidable Younus Khan, who were more often than not seen dragging Pakistan out of the doldrums.

The fans were so used to the team’s failures with the top batting order that they would, in their minds, virtually begin Pakistan’s batting at 10-2 after five odd overs. But the trio had instilled so much confidence in the hearts and minds of the fans that they would believe, with untold confidence, that till the three are there, we’ll be fine.

Inzi, Yousuf and Younus had orchestrated several fight-backs and recoveries batting in the middle order and towing Pakistan’s boat through the tedious voyages that usually begun from the “20 for two” sort of situations to the safety of “180 for three” sort of scores. The middle order was Pakistan batting’s insurance policy. It was their fallback option.

In football terms, it was the midfield that would weather the storm, provide protection to the defence and see the team through the 90 minutes to seal the win. That middle order formidability is now, unfortunately, gone.

One glance at the current middle order, and barring Captain Misbahul Haq who is desperately struggling for form himself, you won’t find a single name you could rely on to take Pakistan through those middle overs and bring some stability. The insurance policy has evaporated. If the openers fail, we know we are in trouble. If the openers pull off a once-in-a-blue moon performance, like the one in the second ODI against Australia on Friday, we still aren’t sure that we will consolidate the strong start because our batting frailties, lack of confidence and mental strength have now infected our middle order as well.

Umar Akmal continues to remain an enigma of Pakistan cricket and often flatters to deceive. Asad Shafiq, with uninspiring performances, is also losing the faith and trust of his well wishers and supporters who have stood by and defended him for too long, thinking he will eventually become the long-term replacement for Inzi or Yousuf.

Fawad Alam doesn’t exactly fill you with confidence (read: performance on Friday against Australia). I don’t even want to begin writing about Shahid Afridi and, to make matters worse, Captain Misbah is terribly out of touch as well. Azhar Ali and Sohaib Maqsood are two other names that come to mind but for all their talents, none have shown the kind of grit and mental strength consistently that Inzi, Yousuf and Younus demonstrated during their numerous rescue jobs for Pakistan.

Whether it is the lack of ability or mental strength, it remains unclear but with the World Cup just five months away on the bouncy, fast paced tracks of Australia, it is near impossible to hope for a miracle with our batting. To fix this mess, we need a batting magic wand and we need it pretty damn soon or we’re looking at an embarrassing time Down Under.