Gandhiji would have been proud of you, Kailash Satyarthi 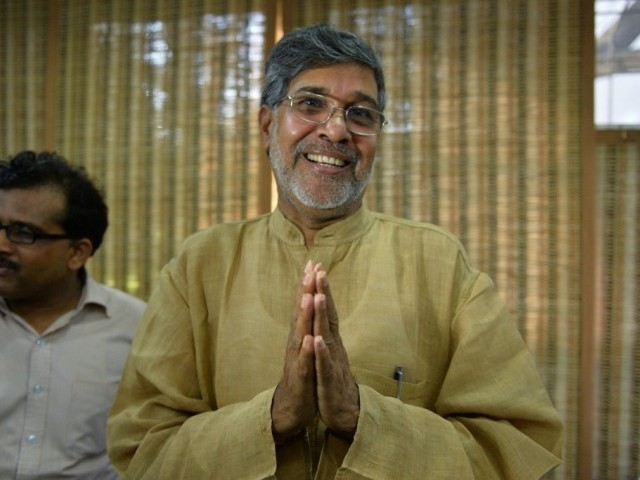 Indian activist Kailash Satyarthi gestures to journalists at this home office after the announcement of him receiving the Nobel Peace Prize, in New Delhi on October 10, 2014. PHOTO: AFP

My father, who was one year senior to this electrical engineering student, vividly remembers him as that shy, reticent, modest young man, from a middle-class background, who would come to the college in his staple kurta-payjama with a muffler tied around his neck.

“Simple living, high thinking,” was his philosophy, recalls my father, a civil engineering student in 1970, adding that “he was different”. Mr Satyarthi would be aloof and would rarely mingle with others.

One thing was clear to my father that Satyarthi was a true follower of Gandhiji and was ‘famous’ in college by virtue of his revolutionary views. This is the reason, perchance, why he also tried his luck in student elections in college, but unfortunately lost.

Nonetheless, he would not give up. He founded the Bachpan Bachao Andolan (save the childhood movement) to fight the scourge of child labour in 1983. But, it was perhaps the Bhopal gas tragedy – which led to the death of hundreds of innocent people – that broke the camel’s back. It was at this point of time that he decided to quit his job as an electrical engineer and dedicate his whole life for the protection of child rights, my father recollects.

Since then, he has not looked back, rescuing more than 70,000 children from slavery and the clutches of child traffickers. Moreover, with the help of NGOs and activists, he has organised a great many raids on factories and warehouses where children were being forced to work in deplorable conditions.

“Whenever I would hand over a rescued child to his or her parents, the first smile on their visage would seem like that of God. I do not know where God dwells. But, I see God in children,” says an emotional Satyarthi to a journalist.

After years of struggle, his efforts seem to have paid off, finally. The Norwegian Nobel Committee has awarded the 2014 peace prize to this child rights activist from India along with Malala Yousafzai of Pakistan.

“The Nobel Committee regards it as an important point for a Hindu and a Muslim, an Indian and a Pakistani, to join in a common struggle for education and against extremism.

Children must go to school and not be financially exploited. It is a prerequisite for peaceful global development that the rights of children and young people be respected. In conflict-ridden areas in particular, the violation of children leads to the continuation of violence from generation to generation.

Showing great personal courage, Kailash Satyarthi, maintaining Gandhi’s tradition, has headed various forms of protests and demonstrations, all peaceful, focusing on the grave exploitation of children for financial gain. He has also contributed to the development of important international conventions on children’s rights.”

This is no duck soup. Only a Gandhian endowed with an indomitable will and a passion to bring change could achieve this feat.

“If not now, then when? If not you, then who? If we are able to answer these fundamental questions, then perhaps we can wipe away the blot of human slavery”.