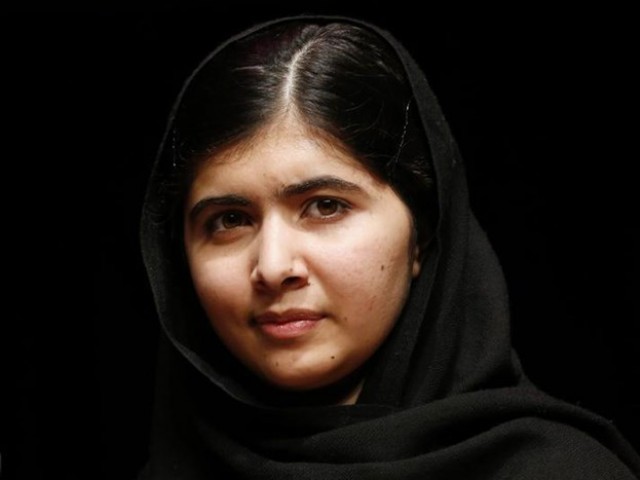 Let’s celebrate what it means to be a Pakistani woman and be lauded for a struggle by the international community. PHOTO: REUTERS

I remember seeing this line somewhere on social media when Malala was shot.

I remember sitting anxiously, watching the television, while channels aired the live coverage of Malala being shifted to a hospital in England for treatment.

There were many counter-narratives that flew everywhere in Pakistan, as is customary. She was labelled as a Yahoodi agent, a ‘drama’, a US drone, a set up; some even cooked up a story where all this was an elaborate set up to defame Pakistan.

But let’s not go into that today.

Let’s not hold on to the hate and the vitriol, the cynicism, the politicising, the siding. Today, let’s celebrate that Malala has won the Nobel Peace Prize 2014. She is the first Pakistani woman and the youngest girl ever to win that prize. Malala shares the award with Indian activist Kailash Satyarthi “for their struggle against the suppression of children and young people and for the right of all children to education”.

She also joins the ranks of many personalities who have struggled for peace and prosperity in their respective regions. People like Nelson Mandela, the 14th Dalai Lama, Martin Luther King and Liu Xiabao.

Today, let’s celebrate the fact that Malala joins the ranks of women who have won the Nobel Prize for Peace – the fact that there are only sixteen women since 1905 to 2014 who have won that prize. Malala joins the ranks of people like Mother Teresa and Shirin Ebadi and Tawakkol Karman – she becomes a symbol today, not just for Pakistan, but for women, for children, for young teens, for human rights’ activists, for anyone who wants to take a stand against religious extremism.

Today, let’s set aside our hate, let’s set aside our bias and prejudice and the rampant sexism and the random conspiracy theories that fog our minds into not seeing what is clear as day: that a young girl from Swat has stood for her right to be educated – and despite bullets, despite the hate, despite the various other factors that may have hindered her in the path to justice – today she stands as the recipient of an important international recognition. Today, she stands as a young Pakistani woman, a Nobel Peace Prize winner, as a symbol of hope for many girls who deserve to pursue their right to education.