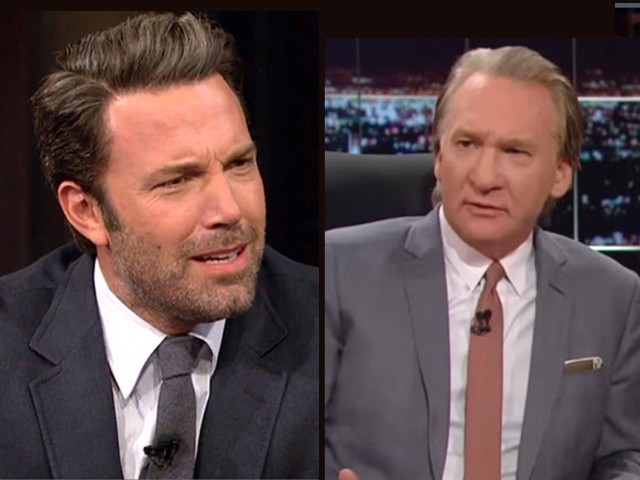 Since 9/11, the American media has discussed Islam in a negative light.

I am a Christian Bale aficionado, especially for his portrayal as Batman. So when it was announced that Ben Affleck is going to be featured as the new Batman in an upcoming movie, I was heartbroken. But putting that aside, in the recent episode between Bill Maher and Affleck that has been stirring quite the hype, I am going to try to pledge my allegiance with Affleck and let my conscience agree to him being Batman.

If you have been following the recent clash between Maher and Affleck, then let’s give a high five to Affleck for standing up against Islamophobia. Generalising an entire population is, in truth, leaning towards bigotry and even hard core liberals like Maher are deemed guilty.

Recently, Affleck was on the Real Time with Bill Maher show to promote his new film, Gone Girl.  However, the film didn’t get much attention as Affleck found himself in a rather furious debate with Maher and the other guest on the show, Sam Harris, who has written a few books on religion. Nicholas Kristof, a New York Times columnist and a two-time Pulitzer Prize winner, was also present.

The entire debate kicked off after Maher made his usual Islamophobic views in an episode that was aired prior to this particular one. Maher cited that,

“Vast numbers of Muslims want humans to die for holding a different idea… and share too much in common with ISIS”.

In the episode with Affleck, Maher again resorted to making his usual comments against Islam. He clearly labelled Islam as:

“The only religion that acts like the mafia, that will %^&$*[email protected] kill you if you say the wrong thing”.

Harris backed this up by calling Islam,

“The mother-load of bad ideas”.

Finally, it seemed as though it was left to Affleck to denounce their opinions by calling them “gross” and “racist”. Kristof also stated that criticising Islam was akin to,

“A tinge of how white racists talk about African-Americans and define blacks”.

While Affleck has been lauded by people across the globe for standing up to Maher, who is well known as being one of the loudest and certainly the most outspoken media personality in his bigotry towards Muslims, I personally felt that there is a growing, subtler, invasive and dangerous Islamophobia creeping into the international news coverage that we are seeing and reading about.

Maher is critically conflating extremists as a whole. He, like many others, is carrying on with the assumption that, by default, all Muslims share inherent traits of violence, extremism and terrorism, and that they are all just a bunch of warmongering, illiterate, stone-aged fanatics.

CNN is one of those news channels that I think sets Islamophobia as default. Last month, the channel invited the Iranian scholar of religions, Reza Aslan, to respond to some of Maher’s earlier views. If you look at the clip below, it is indeed an impeccable example of the bizarre notions about Islam that are spreading into international mainstream coverage.

“Reza, be honest though. For the most part, it is not a free and open society for women in those states”.

The anchors literally appeared and talked back to Aslan in a woefully daft comparison. The sheer ignorance and imbecilic views of the anchors in the clip is painful to watch.

Since 9/11, the American media has discussed Islam in a negative light. It is interesting to note that in recent weeks, with the rise of the atrocious activities by ISIS, Islamophobia is once again being heightened. But that is still no excuse for anchors, reporters, journalists and all those representing the media to spread negative, and many times vile, views on Islam – or any other religion for that matter.

Coming back to the Affleck episode, while I applaud him for putting some sense into this maddening episode, I disagreed with the term “race” that Affleck used. Islam is not a race. It is a religion. You can’t condemn someone as being “racist” upon disliking a religion, for religion has no race.

Nevertheless, thank you Affleck for lending some sanity. I personally would’ve been more excited to watch the entire episode had another religious scholar been present. But alas, for the likes of Maher, he might not have digested a sensible debate on his show.