Why US is leading the war against ISIS 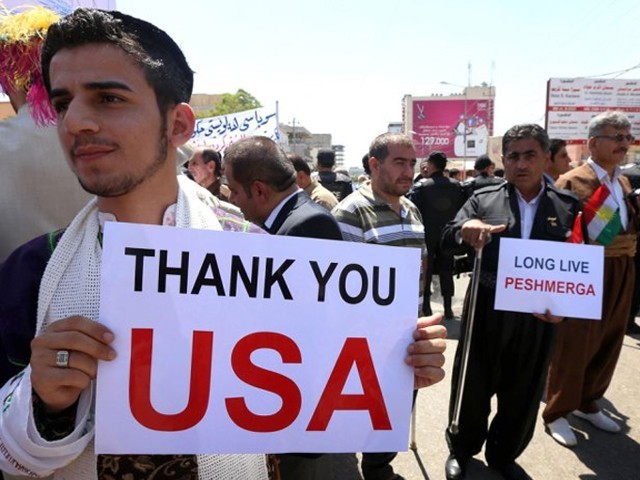 Iraqi kurds and Iraqi Christians hold-up signs thanking the US for air strikes aimed at halting the advance of Sunni Islamic State militants in Iraq on August 11, 2014. PHOTO: AFP

One of the ironies of geopolitics today is that, after spending the last decades complaining about US interference or the various interventions in the Middle East, everyone is now waiting for the US to lead in the conflict against ISIS.

In ISIS we have a phenomenon that, for once, is uniting in a common cause every other state in the region, whether Sunni, Shia or secular. We also have regional players that, in principle, should be able to lead from the front on this issue, like Turkey, Saudi Arabia, even Iran – if it comes to it. A coalition of the three would not only be ideal but, at this point, not completely unthinkable either. Yet, everyone is waiting for the US to lead on the military front and to form any such coalition, when we all know that this may well be fanning the flames on ISIS’s propaganda. After all, non-Muslim intervention in Muslim lands is one of the root causes for ISIS support.

So why is nobody else willing to take an initiative on this?

By now, all countries in the region must have come to accept that appeasing ISIS will be self-defeating in the long run. And the longer ISIS is left to run amok, the more entrenched they will become and the harder to dislodge. Why did both Saudi Arabia and Turkey need so much prodding from the US to finally commit publicly to the international war effort?

And you’d think that they would have the resources to run over ISIS pretty briskly.

According to CIA estimates, ISIS has at the extreme upper limit about 50,000 fighters. Turkey is a NATO member with a well-established, well trained army of about 300,000, supported by airpower. Iran’s army stands at an estimated 700,000 and has thousands of tanks at its disposal. The Saudi Army numbers about 150,000, but they are supported by the largest fleet of F15 fighter jets outside the US and Japan. And it is the best funded military machine in the world after the US, China and Russia.

That being said, however, the truth is that the Middle Eastern armies are not very good. At least, they are not very well equipped to take on an enemy like ISIS. They will be better than the Iraqi army, which has, at times, had a farcical performance against ISIS, of course, but that is not saying much. Whichever way you look at it, these forces would be staring at potentially serious losses, and also potential humiliations in individual battles.

The loss of political face and of international prestige that leaders of these countries might suffer, especially when their forces look so good on paper, means that they will be apprehensive. Nobody wants to stick their own neck out. Nobody wants anything like a rerun of 1967, when a relatively small country like Israel defeated all the Arab armies together.

So yes, these countries will be cajoled into some kind of symbolic participation in the American-led war effort, and their forces will tip their toes into some of the fighting. But leaders of the so called ‘regional powers’ will be very keen to minimise their physical exposure, so that they avoid any risk of direct defeat at the hands of ISIS.

This is why the US is invited to take leadership on this issue, but also, principally, to carry out as much of the fighting as possible. The US, on the other hand, has its own very good reasons to not ‘put boots on the ground’ and limit itself to airstrikes. And so the months pass, and the ISIS cancer is left to fester.