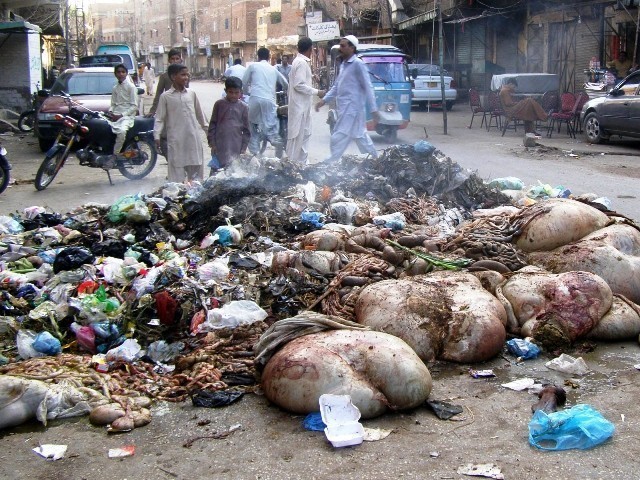 People usually throw away slaughter waste near their homes without thinking about the associated health risks. PHOTO: FILE

A few days ago, the cattle markets began receiving a huge number of people every hour, coming from different parts of the city, to buy the sacrificial animal that suited their budget and met their needs convincingly.

Different animals, ranging from cows and goats to camels, were seen almost everywhere, albeit on a street or a former empty, barren piece of land.

Animals were tied to posts almost every step of the way. And we all know, where there is a herd of cattle, there is a foul smell taking over the air. The city started to look, and smell, like a farm. And just like the hygiene standards of a farm, there weren’t enough health measures being taken – something that is questioned frequently in our country.

According to reports, around one million animals were estimated to be slaughtered in Karachi alone on Eid last year. When it comes to health, we are the most negligible people around. Our government is also equally irresponsible.

Due to unavailability of free areas or grounds where animals can be kept secured from theft, people are resorted to tying these animals as close as possible. And that means either keeping them in their homes or outside their streets. Due to this, many of us are in constant contact with farm animals, which is unhealthy and unhygienic.

We do not realise that being in close contact with such animals increases our chances of catching the Congo virus, which is extremely deadly and the death rate for the disease is quite high.

But this is not where things go bad. Things get worse once the slaughtering starts.

In 2012, the Lahore Waste Management Company (LWMC) disposed of 28,000 tonnes of animal waste, at four dumping sites, during the three days of Eidul Azha. Once the animal has been sacrificed, people throw away slaughter waste wherever convenient without even thinking twice.

An expert at the Jinnah Postgraduate Medical Centre, Dr Seemin Jamali, said that people usually throw away the offal near their homes without thinking about the associated health risks.

“Animals such as rats, vultures, cats and dogs feed on the waste and make the disposal site a breeding ground for a multitude of diseases. People should think twice before throwing entrails outside their houses,” she warned.

In United Arab Emirates (UAE) and other developed countries, the slaughtering procedure is done in a well-maintained and hygienic environment, where all they need to do is to take their animals (sometimes even that is taken care of) to the slaughter house and get them cut in a clean, healthier way. Meanwhile, in Pakistan, such a concept is alien to the people.

At the end of the first day of Eidul Azha this year, all I saw everywhere was blood and slaughter waste and it disgusted me terribly. As a child, I refused to eat meat simply because of the ‘sacrifices’ and ‘remains’ I had seen outside everywhere.

In Karachi, with a population of around 18 million, we already have enough issues to worry about and fear. The last thing we need to add on to the chart is a hygiene issue. That being said, where there is a will, there is a way. All is not lost.

This situation can improve and get better if every individual takes responsibility on himself, being a citizen of this country, and carries out the slaughtering process in a civilised and educated manner.

People who wish to carry out slaughtering at their homes should discard the waste and remains in a well-organised manner. The government should also do its part and implement waste management procedures whereby people can bag the waste, which can then be collected by waste trucks from outside people’s homes.

Bloody roads, animal skin and unwanted organs with flies hovering around is not only a disgusting sight but extremely unhygienic. Why does one want to invite a disease knowingly when some simple steps can ensure a happy, clean and hygienic Eid for you and your family to enjoy?