When one starts questioning the rituals of Eidul Azha 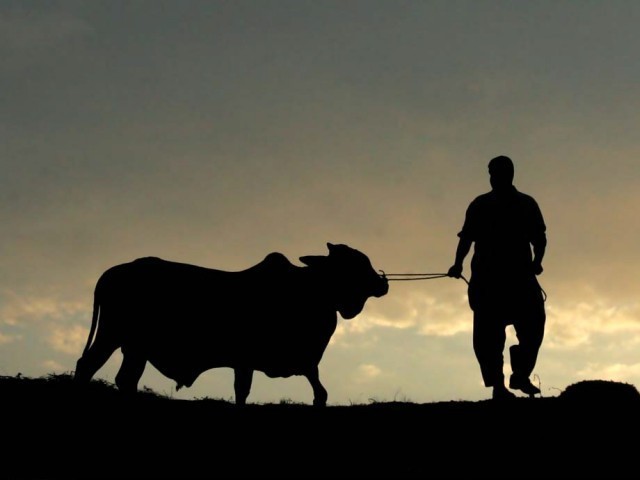 The poor animals being slaughtered actually provide livelihood to millions of poor Pakistanis who wait eagerly for this Eid to sell off the cattle they have raised all year round. PHOTO: FILE

Eidul Azha in a rural set-up has jarring differences when compared to how we celebrate this Eid in cities. I live and celebrate my Eid in Karachi, but if I celebrate it in my ancestral village in Khairpur, Sindh, this is what would be different.

The animals would be much less expensive, much more readily available, and the sense of community in sharing the meat would be the focus. Less affluent neighbours and relatives will casually come to the house where an animal is sacrificed and ask candidly for a share of the meat. The ones giving it out will not look down on the ones asking for it. There are fewer formalities and lesser ego issues involved, something that urbane sensibilities take away.

But perhaps the best thing about celebrating this Eid in my village is that no one questions the ritual. In an urban, more “aware” world, we question everything. But when each religious ritual is questioned, its efficacy is doubted and its methodology is demeaned, we are actually getting ahead of ourselves. A classic example is what we here every year:

“Why not do away with this ritual of animal sacrifice?”

The reasons given are many. The fact that this ritual involves blood and “gore” and millions of poor animals end up losing their lives, and so the ritual is too violent. The fact that the stench, the organs, the blood (yes, the blood is a pet peeve) and the slaughter waste makes our entire cities abattoirs. And the most classic one is that the same money could be used to help the needy with their more urgent needs.

“Why not pay a poor child’s yearly school fee, rather than spending the same money on slaughtering a goat?”

The answers to above criticisms are quite simple, really.

The problem is not with so many animals being slaughtered, but with the fact that our cities in Pakistan are not equipped with the infrastructure to dispose the slaughter waste on this day, or any day actually. Our anger is misdirected at the ritual, whereas the problem lies with the lack of civic sense in our citizens in how they dispose the slaughter waste. Here, we stumble upon a bigger issue – the fact that being a good citizen that does not harm others is a basic tenet of Islam, but is sadly not seen as one. But just because people break traffic signals, we cannot stop using cars on streets. Similarly, the ritual cannot be done away with because of the fault of some.

The poor animals being slaughtered actually provide livelihood to millions of poor Pakistanis who wait eagerly for this Eid to sell off the cattle they have raised all year round. Try and explain to the shepherds who travel to Karachi from Tharparkar and to Lahore from villages in Rahimyar Khan that you think this ritual should be done away with. The reaction may surprise you.

What’s interesting is that most of the people criticising the ritual are avid meat-eaters all year round. It is not like they moved to being vegetarians and vegans. They love their ‘bong ki nihari’ and ‘mutton pulao’, but have a problem with this, giving reasons from environmental imbalance to being unkind towards nature.

The ritual is mandatory for those who can afford to sacrifice an animal. In today’s era of inflation, if a person can afford to spend on an animal’s sacrifice once a year, then that person can for sure spend on paying a child’s fee for school too. Why are the two things mutually exclusive? Why must I choose one?

But who are we kidding? The above given reasons, both for and against this ritual, are logical. And religion, worship, and most of all faith, cannot be explained by logic. Humans are innately selective in the logic they choose to strengthen what they already believe in.

Muslims, who unquestioningly carry on this ritual, or any ritual of faith, may have understood that salvation lies in trusting how the Mastermind has designed religion. He created us and He knows what works for us. Sitting and meditating is great but can never replace the five daily prayers. A nature hike may be great for your soul but can never have the effect that sa’ee between the perpetually overcrowded Safa and Marwa in the hot city of Makkah does. And if I spend money to help a needy (which I must, as charity is both a ritual and a purification exercise), it’s a great thing to do, but will not have the same effect as sacrificing an animal on this day.

In this act, I feel an affinity with that act of Prophet Ibrahim (AS). As someone who has genetic hemophobia and cannot stand the sight of blood, it’s not an easy ritual. But then, acts of love and leaps of faith never really are easy.  As mentioned in the Holy Quran, it is not the flesh or blood of animals that reaches Allah; it is your piety that reaches Him. The biggest part of piety is handing over one’s reigns to Allah, and saying, “You Know best”. Accepting one’s human limitations of understanding when compared with Divine wisdom – that, my friends, is the ultimate sacrifice.