When a rape victim is ‘Outlawed in Pakistan’ 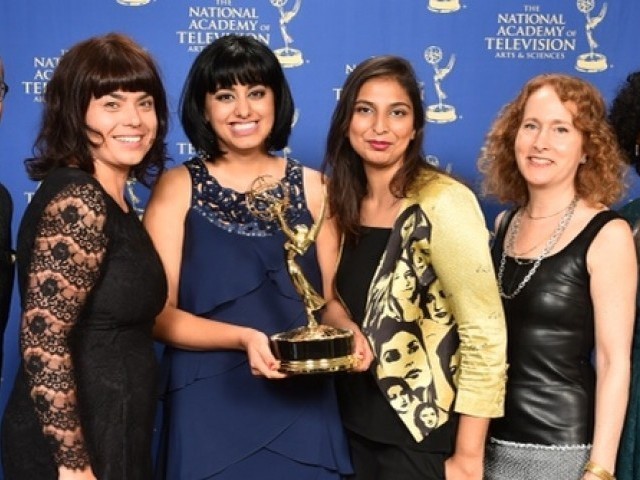 The team of Outlawed in Pakistan. PHOTO: HABIBA NOSHEEN

Outlawed in Pakistan won an Emmy this year for Pakistan and this is a triumph that must be celebrated on many levels. Pulitzer Centre grantees Habiba Nosheen and Hilke Schellmann spent five years in making this 45-minute-long short film, exposing the inherently flawed justice system of Pakistan.

It’s another addition to the success spree of alternate filmmaking in Pakistan, two years after Sharmeen Obaid Chinoy won an Academy award for her documentary. It’s also an endeavour to bring forth the severe violation of women rights and how women, from extremely opposite social and economic backgrounds, work together to empower women all over and making them heard. The short film also talked about the crucifixion of the oppressed in a sexual crime – especially if the oppressed is a woman.

Unfortunately, only the trailer of the short film can be accessed right now in Pakistan but, nonetheless, the fleeting glimpse reveals its essence. It starts with a telltale flute playing in the background and the scene is of a barren Sindh desert and dingy town streets. The alleged crime is as rotten as the sewerage system of the street shown, which can no longer be upgraded – like the lives of its dwellers.

However, there’s a spark of hope still evident in alleged rape victim  Kainat’s eyes, despite the tiresome seven years of trial and tragic loss of her brother in the fight. The most daring thing about Kainat is that she comes on camera and tells her story without covering her face. She looks into the viewers eyes and tells them that it’s not her who has to be ashamed and hidden; it’s her persecutors.

By facing the atrocity without any victim’s guilt and shame, she has challenged the power paradigms and gender hypocrisy of our society. The moment a rape victim starts pursuing her case, the greatest trauma she has to go through is social shaming and trial for being besharam (shameless) and outspoken for our culture and values. Since when did we start associating a women’s body with a man’s honour is a mind boggling question indeed but it’s a sad fact that, alongside men, even women take an equally excruciating part in stigmatising other women.

The stigma of hushing and quieting women exists on many levels. We come across this every day, on various personal and social levels. If a boy is staring at you, following you, making cat calls, or groping you in public transport or crowded public places, you are always advised by your family to stay quiet and ignore it as it would be the only respectful way. The logic goes that by denying its existing and sticking your head in the sand, the problem would go away itself – simply cease to exist.

This behaviour exists equally in all social strata; we have seen our parliamentarians defend the practise of burying women alive in Balochistan. We’ve heard General Pervez Musharraf condemn Mukhtaran Mai for speaking up and causing national ‘shame’. We’ve seen it all. That’s exactly the reason why most of the rape cases go unreported in Pakistan as the family wants to protect its own ‘honour’, rather than the dignity and mental health of the victim.

It catapults a vicious cycle where the victim starts feeling guilty and responsible for bringing this curse upon herself. It becomes fateful in a society where no medical or emotional support is available for the victim. Reprimanding in the name of ‘honour’ is what we hear from the alleged rapists in the short film as they conveniently say that she should have remained quiet had she been respectful and her speaking out alone confirms her ‘characterless-ness’. Kainat challenged this stereotype at the age of 13, and she was lucky that her family supported her in this regard.

Cladding a worn out slipper, she is shown climbing the lawyer’s chamber/human right activist’s office and the image becomes quite symbolic of the deeply tattered justice system of Pakistan. The short film comes across as a balanced endeavour as the makers have tried to present both points of view.

The film revolves around Kainat’s struggle to relocate in Karachi, face constant pressure and threats, pursue her case in the court and start working with War Against Rape and how, during this journey, the brave girl shows remarkable courage and resilience. Kainat’s story also questions our norms that are often used as weapons to persecute women and relax punishment against their oppressors.

Kainat was declared ‘karo kari’ (black female) after being raped; in other words, she was sentenced to death for being impure and her brother was killed for not complying by this sham tradition. Women in Pakistan have always been exploited and silenced in the name of culture, values and traditions.

Every woman in Pakistan can relate to Kainat’s story at some level. We have all been repressed and, instead of being helped, were asked to silence our voices. Change can only come when we start accepting and listening to the victims without any taboos and that’s what Outlawed in Pakistan has done.