This Eid, there was no spirit of sacrifice for me 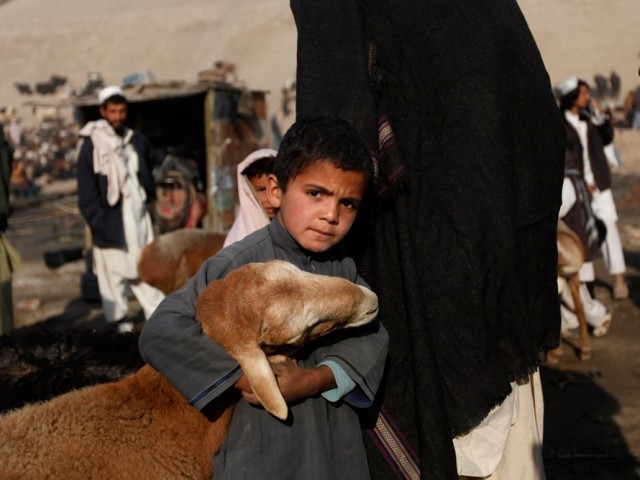 The grunt of trucks brought all the children down into the street in a jiffy, and the clamour increased. PHOTO: REUTERS

Six-year-old Osama ran hurriedly down the stairs of his apartment, as did the other kids. Children came rushing out of their houses, some from their homework and others from their video games. Mothers shrieked and grandmothers grumbled but to no avail.

The street was soon swarming with kids of all ages and sizes, running towards something that seemed to possess a magnetic prowess. At length, the Pied Piper of Pakistan stopped, and the children stood around it, anticipating the descent of the much awaited cow. Excitement was widespread in the crowd, every child and every man was discussing in hushed whispers the arrival of the first cow in the area.

“Seventy thousand – that’s what it cost, Khan Sahib told me himself,” one said.

“Naw, he told you an exaggerated price – look at the sickly animal, it barely cost him a 50,” another said.

“The prices are sky-high these days,” yet another added.

And while the men debated on the price, the children had something very different to discuss.

“No way! Look at the way it is switching its tail. It looks wicked,” said Ali.

“Yes, it is a khurraant (wicked) one,” most of the boys agreed.

Osama was new to this hullabaloo. Recovering shortly from Asthma, he had not been allowed to come outdoors, especially not in these times, when the air was full of dung and fodder. He, therefore, listened with great interest.

“My abbu will go to the mandi (cattle market) this week,” Umar was saying proudly.

“You guys wait and see our bull.”

“My abbu will go the mandi tomorrow,” said Ali.

“Our cow will be the best in the area.”

And suddenly everyone started claiming that their animal was going to be the heaviest, the priciest, the prettiest. The adults didn’t say this out aloud, of course, but deep down they were planning already – it seemed the kernel of their existence to get a better animal than the rest of their acquaintances.

People always called him that, and he didn’t really mind.

“Bin Laden, when is your abbu going to the mandi?”

Osama didn’t actually know. He thought of telling these boys that his abbu was going to the mandi that very week, like many others had claimed, but that would be utter falsehood. When he asked his abbu that night when he was planning to go to the mandi, his abbu said that Eid was more than a month away, and that was a very long time. They would get their animal shortly before Eid. Osama was fairly disappointed. He had, too, wanted to show off, like all the boys and their fathers, but he wouldn’t get to do that for a long time.

It went on all week. The grunt of trucks brought all the children down into the street in a jiffy, and the clamour increased. Kids would run after the trucks, calling out senseless chants of “deepa, deepa!” and a resounding, unanimous “Ooh!” when the cow/bull descended. Some cows were shareef, and they descended docilely, but some were khurraant, and they provided much trouble and excitement.

With the arrival of every new entry, the unspoken competition increased. Who had the best cow? Whose was the heaviest? And, most importantly, whose was the priciest?

Osama hung out all day with his friends, listening to their banter.

“Umar’s cow isn’t really that big; it’s got eight teeth, it’s old. Mine is smart and it cost one lakh rupees.”

“Oh no, not yours! My abbu bought two cows, both costing one lakh rupees.”

“You mean both together cost one lakh rupees?”

“No dumbo! I mean they cost one lakh rupees each.”

“Oh by the way, what the hell does ‘deepa deepa’ mean?”

“I don’t know. I think it’s a substitute for Hee-haw, Hee-haw”

He listened to the discussions of the adults when they sat together outside in the night.

“Khan Sahib’s cow is such a sickly animal; it definitely didn’t cost 70. Have you seen Bhatti’s bull?”

“Oh yes, I did huge beast. He said it cost two lakh fifty-five. He’s exaggerating it; it barely cost him one lakh fifty.”

Osama was intrigued – but he was also confused.

He asked his dadi (paternal grandmother) why they celebrated Eidul Azha in the first place – they could always get meat at the butcher’s. She related to him the tale of Hazrat Ibrahim (AS) and said that it wasn’t about the meat; it was the spirit of sacrifice that mattered.

His ammi and abbu were, meanwhile, busy preparing for Eid. They had gone shopping and bought new clothes and jewellery and shoes and upholstery – Dadi did say it was too much, she had been much depressed and had said,

As time advanced, the area began brimming with cows, goats, one or two camels, and a great lot of dung. Everything smelled of dung – and this was the part Osama hated, it drove him crazy. There was dung in the air, dung on the roads, dung in his dreams. It made hard for him to concentrate on what his friends were saying when his head was so full of dung.

“… then we’re going to have a barbeque on the second day, paye on third, hunter beef on fourth…”

“Wait,” Osama said, “What about the spirit of sacrifice?”

“What about what?” Umar asked, amused.

Umar was two years older than him, and he knew more about cows and bulls and Eidul Azha than Osama did, so it was bizarre that Umar hadn’t known about the spirit of sacrifice.

“You know, the spirit of sacrifice, the reason Eid is celebrated?” said Osama wisely.

“Naww, Eid isn’t celebrated for any spirit of sacrifice, whatever that is!”

“No sir. Eidul Azha is all about buying cows and barbeque, just like Eidul Fitr is all about Eidi and sheer khurma,” was Umar’s astute answer.

All the boys agreed with him, and Osama was at a deadlock. He couldn’t decide whether Eid was about the spirit of sacrifice or barbeque – but then, who didn’t like barbeque?

However, the entire month passed away, and his abbu still hadn’t gone to the mandi. Osama was growing worried; what if his abbu was so late that there was not even a single good cow left at the mandi?

How all the boys (and their fathers, doubtless) would jeer at him!

“Did you see Osama bin Laden’s cow? What a sick dying thing! No meat at all in it! So ugly, urgh.”

“Must’ve been the cheapest cow in the mandi I’m telling you, cheap as a bullet…”

He decided he should remind his father in case he had forgotten – he was too aware of the impending doom. But his abbu said that they were broke and they wouldn’t be doing qurbani (sacrifice) that year.

“Don’t talk nonsense, son,” his Dadi had said. “You have enough money in the bank.”

“A good cow would cost about 80 grand and he didn’t have that much to spare.

“Why not do a hissa (portion)?” Dadi said. “Or why not buy a cheaper animal?”

Dadi and abbu battled on but Osama was doing his calculations.

He was pretty sure if abbu had gone to the mandi when he had first asked him to, abbu could have spent the 35,000 that he spent on shopping, on an animal instead. A goat, maybe.

The last thoughts that troubled him before he finally went to sleep were the barbeque that wouldn’t be taking place now, and the taunting remarks of the townsfolk.