An older, scarier version of ‘tabdeeli’ 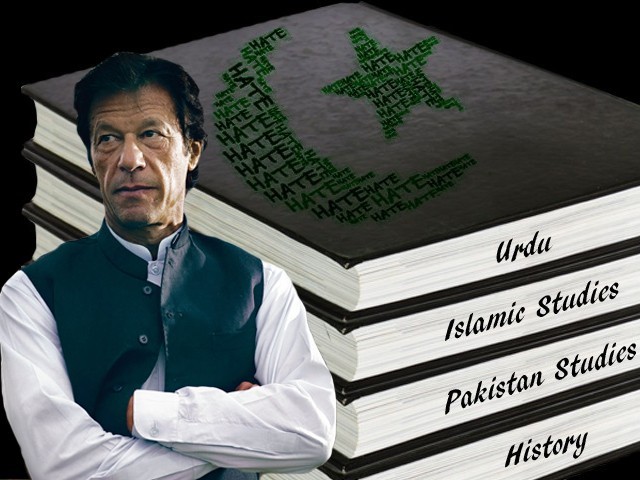 PTI gave an example of its political opportunism as it endorsed JUI-F and JI’s proposed changes in K-P’s textbooks.

Pakistan Tehreek-e-Insaf (PTI) has become quite a talking point these days. Its chairman, Imran Khan, has been giving ‘dharnas’ for the past 50 days (though one must question the legitimacy of the dharna since it keeps hopping from Bani Gala to Karachi to Lahore and so on and so forth) in the name of… well, I’m not really sure.

Perhaps some of the angry, cussing, hatred-filled insafians can enlighten me with their version on this. I’ve faced enough abuse from PTI trolls for not supporting PTI and openly criticising Imran’s version of facts and events.

Khan sahib wants a ‘Naya Pakistan’ and chimes for ‘tabdeeli’ (change). He has a litany of allegations against the incumbent government ranging from rigging to the PM being ‘sadiq and ameen’ (Article 62 and 63). Every night, at prime time hour, Mr Imran Khan Niazi, MNA from (NA-56 Rawalpindi), stands atop his container and demands a resignation from the democratically elected prime minister of Pakistan. His tirade doesn’t end or begin with the resignation. He calls everyone in the parliament a ‘thief’ – conveniently forgetting that he is a member of it as well.

He insists that the Sharif brothers have looted this country for 30 years (a factual error that esteemed politicians such as Shah Mehmood Qureshi and Sheikh Rasheed can happily correct him on as the Pakistan Muslim League-Nawaz (PML-N) government has been in power for less than 15 years) and that only he, Mr Khan, understands the value and meaning of good governance. He cites examples from Scandinavian countries, and then goes on to burn his (allegedly paid) electricity bill. He talks of ‘azadi’ (freedom), ‘tabdeeli’ and a ‘Naya Pakistan’ but does not explain how he aims to achieve it.

There are two frightening dimensions of PTI. The first is the fact that there is no change in the province that they did manage to form a government. Whether it is the IDPs or flood-victims, Chief Minister Pervez Khattak seems to have little involvement in their relief. Imran himself has done or worked little to alleviate the suffering of the people of his province.

Instead of a civil disobedience movement, it would have been much more heartening had he asked his emotional and loyal insafians to donate heartily to the flood relief programs. Instead of making Nawaz Sharif the focus of his speeches, parodying Awami National Party (ANP) leader Achakzai or dancing on DJ Butt’s tunes, I would have respected Imran much more had he mobilised the crowds of millions and the Tsunami of people (by his own account) into making positive changes into their lives.

He is a crowd-puller for sure and has a faithful (almost cult-like) fan following who believe everything that comes out of his mouth. He ought to have led by example by teaching Pakistani men and women to respect the constitution, to follow the rules and to make Pakistan a better country by working together. Instead he spreads hate and violence, never condemns the attack on Geo television workers, openly incites hatred against state institutions and uses borderline abusive terminologies for everyone ranging from Nawaz to IG Islamabad to Najam Sethi.

The second frightening aspect is PTI’s soft corner for Tehreek-e-Taliban Pakistan (TTP), considering how Imran wants TTP to open official offices and the Taliban claimed that they do not accept any prime minister except for Imran. Khan sahib also went on record to state that it was Benazir Bhutto’s own fault for being bombed. This is not only ominous and foreboding but is also misleading for the politically-ignorant followers of Khan. Siding with religious extremists or even being an apologist for militants at a time like this is not the change Pakistan needs.

Recently, PTI gave an example of its political opportunism as it endorsed Jamiat Ulema-e-Islam-Fazl (JUI-F) and Jamaat-e-Islami (JI)’s proposed changes in Khyber-Pakhtunkhwa (K-P)’s textbooks. Stories of regional personalities such as Abdul Ghaffar Khan, Bacha Khan, Ghani Khan and Ranjit Singh were added by ANP, which JI and JUI-F strongly opposed. They demanded the removal of the abovementioned personalities as well as removal of pictures of women with their heads uncovered.

Education cannot be dictated by politics and religion, especially in a country like Pakistan where there are various ethnicities and religious minorities and the freedom of expression is already an important issue. In a country where professors, doctors and sitting governors are assassinated for exercising their right to free speech, it is imperative that our education system is free from bias and influence of religious extremism. It is imperative that we teach our children to embrace truths and differences of lifestyles in every way.

It is also imperative that Imran sahib, who regularly chants ‘change’ and ‘revolution’, should remember that charity begins at home and the censorship-stricken schools of K-P are as much a part of Pakistan as D-Chowk, Islamabad and Minar-e-Pakistan, Lahore.