Younus Khan, it’s time for you to retire 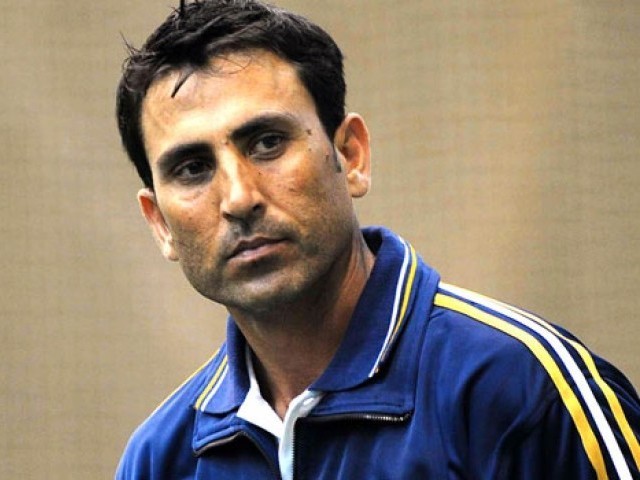 Younus Khan, I am sorry to say but your response to the PCB regarding this issue is way more childish than the example from my childhood. PHOTO: AFP

(Since I didn’t get my batting, I won’t field either)

Recalling childhood and those crazy action-filled cricket-centric evenings, this quote was, arguably, the most ‘rational’ argument one could present to back out from fielding.

Whenever such a situation arose, the ‘senior players’ of the team would gather around the kid and try to convince him to field. If he owned the bat or ball, he was awarded with the privilege of keeping the wickets with the youngest boy in team at a ‘third man’ position. However, if this arrogant youngster was just a player and couldn’t add any ‘monetary value’, he was asked not to join the street cricket fiesta from the next day.

The recent out bursts from Younus Khan reminded me of this childhood routine. He was selected for the upcoming tour where Pakistan will face Australia in a hybrid series of T20, ODI and Test matches. However, Khan’s selection was only for the Test team and this upset him greatly. He has already shown his frustration by not only withdrawing his name from the Test team but also challenging the Pakistan Cricket Board (PCB) to win a single test match without him.

Recently, Shahid Afridi – yet another immature but sensational player – has backed his former captain, asking for a better farewell for senior players. I have also seen some former players bashing the PCB for not selecting Khan for the ODI team on media channels. The whole story is presented like as if PCB is humiliating Khan by not selecting him for the ODIs and such disgrace shouldn’t be allowed to happen.

Khan’s ODI career record is good no doubt, but it is nowhere near fantastic, fabulous or incredible. Average of just above 30 runs per innings with a strike rate of 75 is not something that will be remembered for years. Six centuries in 244 ODI innings (41 innings per century) with only one outside the subcontinent speaks off his inconsistency and elongated poor form. His stats look more miserable when you consider the fact that he bats up the order, usually number three or four, and Pakistani openers don’t last more than 10 overs that often.

I will pick India as an obvious choice for comparison but comparing Mr Khan with India’s number three will be a total disgrace. Virat Kohli, who has racked up 19 centuries in 130 innings (7 innings per century) with average of 50 plus while maintaining strike rate of almost 90, is such a superb player that you are forced to praise him even if you have physically taken part in the 1965 war against India.

Khan, like other senior players, asks for a dignified farewell but that can happen only if these players understand that they have to prove themselves consistently. A one-off performance is not big enough to retain them in playing 11 forever. I firmly believe that if you are not performing, whatever seniority level you have, you should humbly step down at the right time; otherwise, you are actually forcing selectors to drop you. You are an employee of a company and if you are unable to produce results, you will only be given a couple of chances – not more than that.

Keeping all political differences aside, I respect Imran Khan for setting an example of taking a dignified exit from the game. Jacques Kallis has recently announced his retirement despite the fact that his board guaranteed his spot in the upcoming World Cup. Rahul Dravid stepped down after a horrible run in England and Australia. Shane Warne retired after a wonderful Ashes tour. All these players put up their resignations before their respective boards could have even thought of dropping them.

Younus Khan, I am sorry to say but your response to the PCB regarding this issue is way more childish than the example from my childhood.