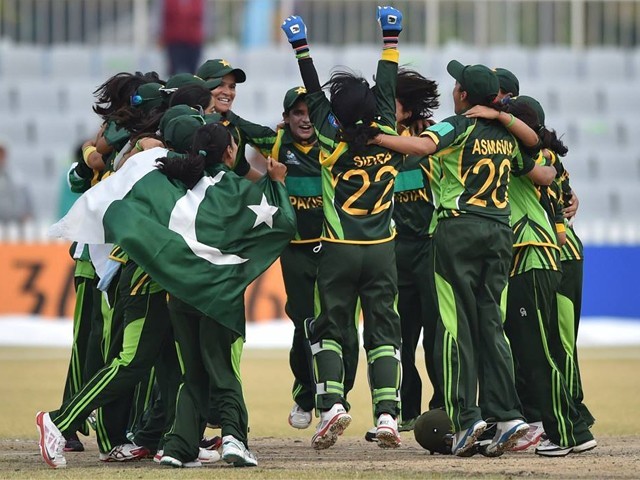 Pakistan's women cricket team celebrate their victory during the women's cricket final against Bangladesh at the Yeonhui Cricket Ground during the 17th Asian Games in Incheon on September 26, 2014. PHOTO: AFP

In the midst of a prolonged political catastrophe, a good part of the country on the mend post the recent flood disasters and a freshly-banned superstar bowler, Pakistan’s women cricket team has given the nation a reason to brighten up by bagging Pakistan’s first gold medal at the Asian Games 2014.

Held in Incheon, South Korea, the 2014 Asian Games have been scheduled to take place from September 19 to October 5.

Members of the Pakistan women cricket team stand for the national anthem after receiving their gold medals following their win against Bangladesh at the Yeonhui Cricket Ground during the 17th Asian Games in Incheon on September 26, 2014. Photo: AFP

This year’s cricket final looked much like the replay of the one in 2010, where the team won their first ever gold medal by a 10-wicket win over Bangladesh. This year though, the target was set by Pakistan in a low-scoring, one-sided game. The rain-affected T20 began with Pakistan women’s election to bat first, who set up a rather weak target of mere 98 runs. The match began just as a traditional T20 clash would – with an early wicket. Opener Javeria Khan stumbled in the third over, giving Bangladesh a vital head-start. To the team’s dismay, she was later joined in the pavilion by opener Marina Iqbal in the eighth over. For a moment there, I was forced to ask myself whether this was our male team playing.

In a nutshell, it was overall an eminently average batting performance by the upper/middle order. None of the batswomen managed to cross 30, which led to a 97-run total by the end of the 20th over.

Bangladesh cricket player Rumana Ahmed (L) bats during the women’s cricket final against Pakistan at the Yeonhui Cricket Ground during the 17th Asian Games in Incheon on September 26, 2014. Photo: AFP

However, as luck would have it, the target shrunk to 43 runs in seven overs – thanks to the Korean clouds. If there is something undeniably true about our cricket, whatever the gender may be, it is that we manage to stun the rival by defending the lowest most easy-to-chase totals through our bowling.

The Pakistan team set the opposition on pins and needles with their adequate wicket-to-wicket bowling, combined with what was their aggressive-styled fielding, resulting in two run-outs in the third over off Sidra Nawaz’s bowling. The next two wickets were clinched by Sadia Yousuf in the fifth over, only before skipper Sana Mir set things rolling in the next over by seizing another two.

Pakistan cricket player Sana Mir (L) bowls during the women’s cricket final against Bangladesh at the Yeonhui Cricket Ground during the 17th Asian Games in Incheon on September 26, 2014. Photo: AFP

All three spinners, along with the fielders who conducted three run-outs, left no stones unturned in tightly limiting the Bangladeshi batswomen. The match concluded with spinner Nida Dar’s triple-wicket in the seventh over, at the end of which the team had thrivingly retained their gold medal.

To say that women cricket in Pakistan is eyed with extreme lethargy and disregard would be no news. Not only is this the case with cricket, nearly all of the sporting occasions, considering there are hardly many, where women compete are tagged needless, uncalled-for and a waste of time. Being associated with international cricket myself, I am familiar with the local colour surrounding female athletics.

This is one of the many reasons why our women fail to openly move forward in the society to pursue their ambitions. The path is oh-so-bumpy that our girls either give up amidst or refrain from taking a step forward in the first place. Women cricket in Pakistan has failed to create a noteworthy reputation and has, right from the start, been under-facilitated. Despite this acerbic truth, the enormous talent in Pakistan through all major sports has given us enough attainments and feats to brag about, this gold medal is an example of which.

The Pakistan Cricket Board (PCB) should restructure the women’s cricket body, organise a larger domestic circuit and work in favour of maximum international exposure. Women cricket in Pakistan, if provided with the required attention, facilities and support, could go places in all three formats and prosper unstoppably. Our women possess competence of much more than parhayi (education) and parathas, and it’s high time the average society accepted this.

Ladies in green, we are proud of your efforts!