India walking the talk with their first transgender news anchor 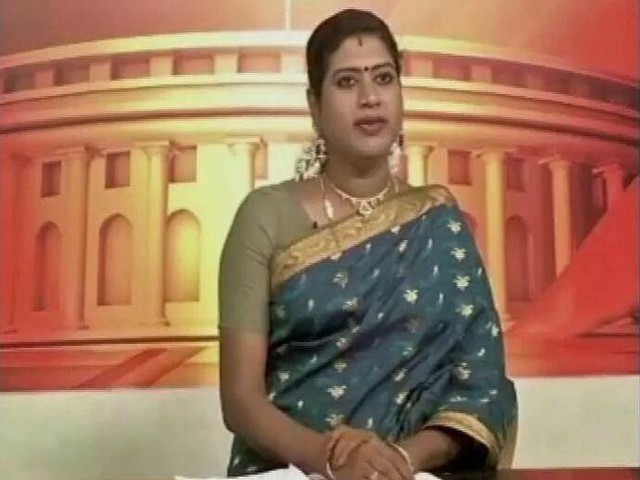 Padmini Prakash, 31, faced discrimination throughout her life, including being disowned by her family, before being promoted to become the face of the Lotus News Channel's daily special bulletin. PHOTO: AFP

It is prime time bulletin on Lotus News, a satellite news channel in southern Indian town, Coimbatore. Dressed in a dark brown silk sari, 31-year-old Padmini Prakash is all set to read out the day’s headlines. In matching brown lipstick, vermilion in the parting of her hairline and a bunch of white jasmine tucked in her black curls, Padmini sports a professional charm. Her Tamil pronunciation is clear. Her intonation is perfectly timed. In less than two months, Padmini has become one of the most popular news anchors of the television channel.

But it wasn’t an easy journey for this first ever transgender television news anchor of India.

“I never wanted to create any history. All I wanted was social recognition and a dignified life. I am happy that I have got it now,” a confident Padmini says.

Indeed, social recognition and dignified life are certainly rare for a transgender in India. Even as more than 4,90,000 transgenders live here, they are considered as outsiders. Known as ‘hijras’, transgenders are avoided, feared, despised or vilified. They have always been seen as menace to the society.

In India, they live in cramped ghettos. They are mostly unlettered and belong to the lower middle class. They could be spotted begging at bus stops, railway stations and traffic signals. They are often seen stripping in public to embarrass people into coughing up money.

They visit families on the occasion of child birth to confer blessings on the child and receive money, in return. Perhaps, this is the only time when they are allowed to enter someone’s house but only out of sheer fear that they will cast a spell on the new born if refused money. And many believe that the curse of a transgender is dangerous for the child. Of late, they have also been used as tax collectors by state governments. They sing loudly in front of the defaulters’ premises so that the defaulters are shamed into paying up out of embarrassment.

But reality kicks in when they have to fight a daily battle for survival. They are subjected to physical and sexual harassment on a regular basis. Human rights activists point out that they are also forced to prostitution which has led to high prevalence of HIV-AIDS in them.

If Padmini had not gathered the strength to stand against all odds in her life, she fears she would have faced a similar fate too. But she chose to fight against the discrimination and dejection with courage and conviction. She was disowned by her parents at the age of 13 as they couldn’t accept her sexual orientation. But she refused to give up. She took it upon herself to create a space of her own in this ruthless society that considers transgenders a “curse”. She enrolled herself in a Bachelors of Commerce course in an open university. She learnt to dance and also acted in soap operas before she got the job as a news anchor.

Padmini’s recruitment in the television channel has reflected the slow but significant changes that are taking place in the society in order to make dignified space for transgenders. A recent Supreme Court judgment has brought about these small social changes. In April this year, the apex court recognised transgender people as a legal third gender. Prior to the ruling, one was forced to classify oneself as either male or female on identification documents.

The government has been directed to recognise transgenders as an official minority. They have been directed to create a “third” gender box in all identity documents such as birth certificates, passports and driver’s licences.  The court also directed the government to allot quotas for public jobs and admission to educational institutions and for the provision of health care facilities.

Some states have already taken some progressive measures to this effect. For example, Tamil Nadu has offered special third gender cards, passports and reserved seats much before the apex court judgement had arrived. Even a television channel in the state had launched a show in 2009 which was hosted by a transgender.

Some IT companies, security companies and departmental stores across the country are hiring transgenders now. Reality shows on television channels invite them to participate. Talent hunts and carnivals have been organised exclusively for them. In fact, Padmini had won the title of Miss Transgender India in 2009. Padmini is certainly an inspiration for many other transgenders who are yet to defy their destiny.

But it is not the fight of transgenders alone. It is our fight to change our traditional mind-set towards transgenders. We have to believe that they are not despicable. We have to make a conscious effort to create space for them, in every possible way. In public transports, we need to sit next to them and not change our seats with a fear that they will embarrass us by stripping. Our schools need to allow a transgender child to sit in their classrooms. We need to teach our children not to look at them as an object of curiosity. Our Bollywood scriptwriters need to be a bit more creative and not use the word “hijra” as an abuse while penning down the most “revolutionary” dialogues for blockbusters.

We need to remind ourselves every day that the time has come to shape up a society which is equal and sensitive.

She has been a Delhi-based print journalist for the past 11 years. She writes on education, health, conflict affairs and politics. She also writes on politics in south Asia, mainly Nepal, Sri Lanka and Bangladesh. She tweets as @sonia_26 (twitter.com/sonia_26)

Can Modi become a role-model for the children of India?