The attack on Farooq Awan doesn’t affect me, so why should I care? 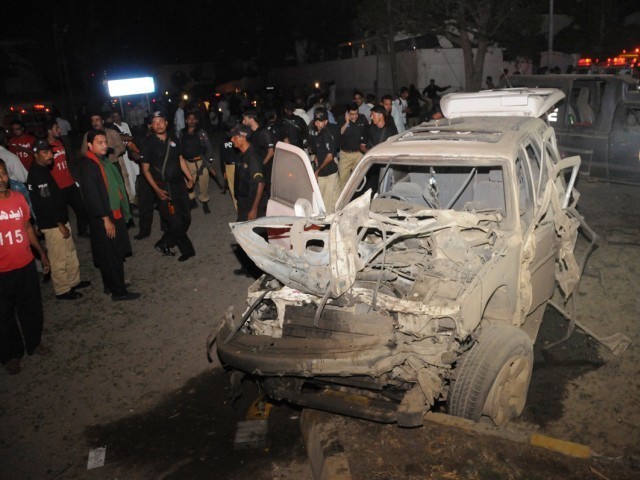 Vehicle of SSP Farooq Awan that was destroyed in the blast on Thursday evening. PHOTO: MOHAMMAD NOMAN/EXPRESS

If you’ve somehow missed yesterday’s news, you should know that there was another attack in Karachi last night, at Gizri, DHA.

When I heard about this, I felt the same pang of anger and frustration that anyone normally would in such circumstances. But, within a minute, it was all forgotten and I continued watching the movie I had paid for. How did I feel so comfortable in resuming my business so soon? Because I didn’t ask what happened, where it happened or why. The real question I asked myself was: did it matter?

Have we, as Pakistanis and especially as Karachiites, lost all feelings and empathy to the attacks taking place around us?

Does anyone even consider the dangerous living conditions they are in before leaving their house? I know I don’t, even though these incidents give my mother the correct justification to badger me into coming home early.

Have we really become oblivious to all this? The answer may not be what one would like to believe, but yes, I have – and so have many others.

If you don’t believe me, go right now and type Karachi on any news website and all you will find in the first five headlines are the following words: attack, killing/killed and death. Yet we all read these things and then go on our merry way like the city is still full of sunshine and daisies. It might so for some, but for those who have lost their loved ones to this barbarianism, the city has become a living, breathing nightmare for them.

But what is it to us, right? As long as we or our loved ones are not directly affected, it’s perfectly fine.

So far, nothing much has been done to curb this situation. These killings have become so rampant that 2013 was called the ‘deadliest year so far’ with a record of over 3200 killings.  Does this number shock you? It really shouldn’t. Why? Because every other day, you do hear about a death over a property dispute or a target killing in some remote part of the city or someone murdered in cold blood over a cell phone snatching incident. But you never register it.

You never let it scratch through your conscience and sink in that a living being, a human, a fellow Pakistani, was killed – that a life was ended. You just don’t let it register. And hence, it comes as a shock to you when news channels tell you the total number of people killed by the end of the year or month.

The conditions are alarming and with the demoniac circumstances, Karachi has slipped on to 136 out of 140 cities in the Global Living Ranking according to the Economic Intelligent Unit Index. We were at 134 four years ago, so this really shouldn’t be a shocker. It just seems like there is no way but down at this point.

I’m amazed at the amount of anger I feel right now. Is this the city I want to die for? Is this the city I love? Is this the place I trust my life with everyday? I know I haven’t done a lot to help Karachi but I haven’t done a lot to hurt it either! In maintaining this bipolar relationship with Karachi, we’ve lost so much. We’ve lost so many Chaudhry Aslams, Zahra Shahids and the recently slain Dr Muhammad Shakil Auj to Karachi and nothing can ever make up for that. And now targeting another SP just claimed two more lives.

When Chaudhry Aslam was slain in Karachi at the beginning of this year, we felt a sense of terror. A strong man, a fearless man, was taken down by the enemy, and this made us all the more vulnerable. Last night’s attack was aimed to kill Farooq Awan, SP Special Investigation Unit (SIU) – another high ranking police officer. The question is, how long will these police officers live in fear? How can they work towards making the city better when they know that doing so might cost them their lives?

Mercifully, Awan survived this attack. And since he survived it, it wasn’t a big deal. So what if two people lost their lives? That happens all the time, right?

It’s scary to realise that it will take a lot more than everyday bombings to shake us to the core.

I think Imran Khan and all our other politicians, who have the mandate of this city and this country, need to get their affairs in order. Pakistan doesn’t really need democracy at the moment; all it needs is a little humanity.

Wake up people. The least we can do is mourn the dead and not slip back into our bubbles. It’s about time!