The army may be helping Gilgit-Baltistan but where is the Pakistani government? 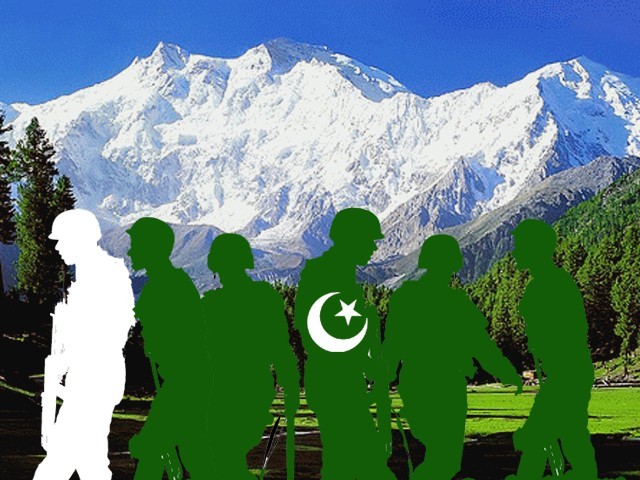 The Pakistan army is playing its role by thinking out of the box.

Trekking is my craze, hiking is my pastime and mountaineering is my obsession. And to observe and do research about the conditions of people belonging to Pakistan’s neglected regions is something that I like to do.

So you can understand my excitement when, last summer, I availed the opportunity of visiting Gilgit-Baltistan (G-B), also largely known as the northern areas of Pakistan.

I went up to a height of 17,000 feet, well beyond tree-line, whereupon I came across something spectacular. I witnessed the glory of the Pakistan army, helping its people out even so far above ground. I saw officers of the military doing everything they could to play a constructive part in the region and improve the dismal state of security in the area, particularly along the Line of Control (LoC) between G-B and Indian-occupied Kashmir (IOK).

The rugged and mountainous terrain of G-B impedes the process of development in the region. The area is away from the centre and, thus, somewhat out of reach from the government’s resources. As a result, people of the area subsist on local livelihood.

However, what the Pakistan army did was play its role by thinking out of the box.

Ascending at a height of 17,000 feet in the Himalayan region, on a military post. Photo: Hamza Ehsan Khan

For instance, when I visited a primary school in Chachathang Village, in the Indus Valley, I realised that it was the only educational institution available to the children of this village, as well as the adjoining settlements. Skardu, the capital of the Baltistan region, is about four to five hours away. On inquiring from a staff member of the school, I came to know that the army was helping them in the provision of teaching staff members as well. Furthermore, since the students could not afford to buy stationary, the local military unit was providing the required resources.

A water tank, for clean drinking water, has also been provided by the unit.

Trust me; it is really hard to find such items in these secluded areas. Despite the fact that the military has no administrative responsibility for the people there, it is using whatever resources it has for the betterment of the area. Having visited Hunza Valley, Shigar Valley and Indus Valley, it was very heartening to see that both the parents and the children have a high resolve in pursuing education and not letting these issues dampen their spirits.

A village school in Hunza Valley at a height of 10,500 feet. Photo: Hamza Ehsan Khan

Poverty is widespread in G-B. Most people depend either solely on subsistence farming or trade of agricultural raw material. The profit earned is used to cater for daily needs. People use yaks (called zhou in the local language), the snow oxen, for carrying heavy loads as well as for milk and meat.

However, wild dogs dwelling in the mountains, have been feeding on the yaks as packs for some time now. This has become a persistent problem for the locals, who cannot afford to protect their livestock, and are also unable to buy more due to financial restraints. While this situation has been reported to the military unit of the area, and they have killed around 60 stray dogs so far, the issue still remains potent.

Not much in the name of health services is available for the people living in the rugged Karakoram, Himalaya and Laddakh mountain ranges. The military, in its pursuit of improving the lives of the people, has also set up medical facilities of varying sizes in the Indus Valley, including the Combined Military Hospital (CMH) in Skardu. The locals are treated free of cost in these hospitals.

The army is showing high resolve in helping the local people by improving their security conditions at such a high altitude. But while it was refreshing to see the military being so proactive, I couldn’t quite get one question out of my head. Throughout the trip, I kept thinking, where is the government in all this?

Even though G-B has been given the status of a separate province, the people’s position over there remains the same – desolate, disconnected and disintegrated with the rest of Pakistan.

The Pakistan army can only do so much. It is time for the government to take responsibility of its people.

An A Level student whose areas of interest include reading, writing, hiking, trekking and social work. He tweets @hamzaekhan (twitter.com/hamzaekhan?lang=en)