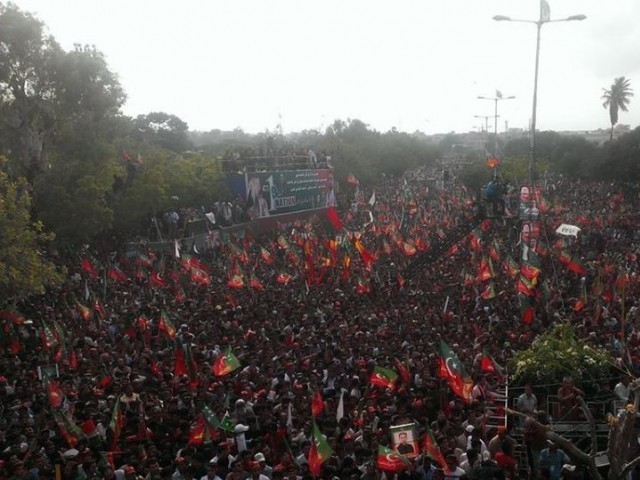 Pakistan Tehreek-e-Insaf (PTI) Chairman Imran Khan, DJ Butt and their merry gang kicked off their Pakistan tour yesterday by visiting the Muttahida Qaumi Movement (MQM) stronghold; Karachi. They undoubtedly drew a large crowd consisting of people from all walks of life. But then again, so does Jamaat-e-Islami.

Large numbers at rallies or not, one thing that really gets to me is the massive pool of contradictions that are the PTI.

They are credited with ‘emancipating women’ and the number of women at their processions and rallies is always highlighted. Yet the party had the lowest number of women contesting general seats during the elections.

They speak of ending dynastic politics and feudalism, yet their second in command is a “pir” and is currently preparing his son to enter politics. They speak of being more educated and capable, yet they use the worst possible language and take name-calling to a whole different level.

Imran definitely touched on a number of issues yesterday; issues that matter a lot to the average Karachiite, including the water mafia, Lyari gang wars and how rural Sindh is direly in need of Naya Pakistan. But after spending more than a month protesting in Islamabad and reminding us on an almost hourly basis of how rigged these past elections were, it is almost astounding how Imran and company conveniently forgot to mention anything regarding rigging yesterday.

Actually a number of events just seemed to slip from their memory: Zahra Shahid Hussain’s murder and how they accused MQM of assassinating her, the protest at Teen Talwar regarding rigging and NA-250, all those phone calls to the Metropolitan Police in London about a certain statement regarding said protest by Altaf Hussain, re-polling of NA-250, visits to London and Imran approaching Scotland Yard to arrest Altaf.

All this was simply forgotten and I believe the rally set a new record on collective, selective amnesia. So much so that Imran actually thanked Altaf before the rally began for his hospitality—the wonders.

It now seems, that according to Imran, the only places where rigging did not take place are the province of Khyber-Pakhtunkhwa (K-P) and the city of Karachi – riveting revelations.

Unfortunately for Imran and PTI, many of us have the ability to retain memories. I for one will not be able to forget how Imran continues to pressure a democratically-elected prime minister to resign from office, how PTI stormed Red Zone with cranes and how PTI has asked its supporters to not pay taxes and utility bills.

And to show that he means business, he recently burnt his utility bills on stage. I wonder how he gets fuel without paying taxes or bought that plane ticket back to Islamabad, but then, that would become an entirely different debate.

Regardless of all his faults, one must commend Imran for making a very wise decision to now tour the country as Islamabad protests slowly fizzle out. Next stop is Lahore, and I do look forward to Imran not making any valid arguments or presenting any substantial evidence to back his accusations.

On an closing note, I would just like to remind everyone who is reading that Imran did win the World Cup, is extremely good looking even at 60 plus and plans on ending poverty in India.