Scotland referendum: Is the glass half full or half empty for the Scots? 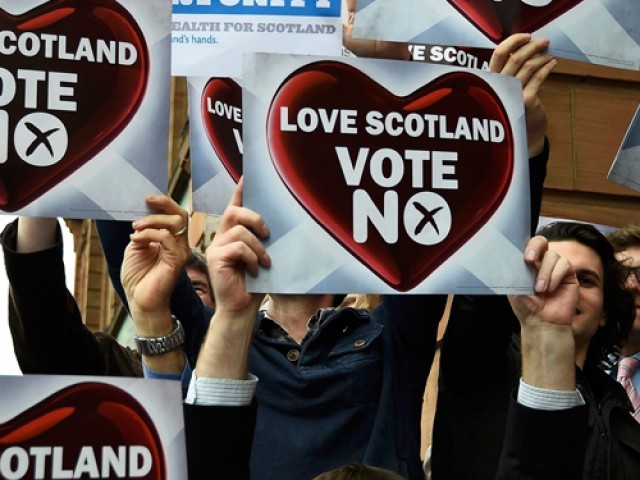 What if British prime minister’s promises are not consummated? Will we witness another referendum? PHOTO: REUTERS

History will remember this simmering September with shimmering words, as the world witnessed Scotland choosing to remain a part of the United Kingdom (UK) on September 18, 2014; where the two letter word ‘No’ subjugated the three letter word ‘Yes’ in the referendum; where a clear majority of 55% to 45% decided to continue the 307-year-old affiliation with UK.

No one can flout the historical fact that Scotland’s three centuries old odyssey with UK is one of the strongest political unions in European history this world has ever seen. However, a simple question springs in many minds that why this Union of Scotland and England ensued way back in early the 17th century.

Though, for many historians this very question is yet to be answered with valid reasoning. However, as per romantic Scottish nationalist, a clique of some dishonest Scots noblemen sold out their countrymen, intrigued by English kickbacks. The decision by the Scots parliament in 1707 to support the amalgamation of two parliaments was a grave act of mutiny instigated by Scottish renegades. But many historians now contest that the decision was backed by pragmatism.

Yes, there was bullying by its more powerful and paranoid neighbour, yet it served Scotland’s economic interests and the financial wellbeing of the Scots. Even so, the move still rankles.

Arguments in favour of ‘Yes’

This referendum was neither a whim nor a suddenly erupted out-of-the-box idea. In fact there were myriad impetuses behind this movement, including economic, financial, social and cultural predicaments that were boiling beneath the surface of the UK for decades, if not centuries. Scottish National Party (SNP) leader Alex Salmond affirmed during the campaigns:

“A free Scotland would be among the top 20 richest nations in the world”.

“Scotland is on the cusp of making history”.

“We have no intention of allowing the Westminster elite to tell us we are not capable of making a success of this wealthy country”.

Salmond’s party and his supporting camp stood up, flounced towards polling stations and ranted for the direct control over their political, economic, social, and cultural affairs as they believed that the driving force backing their indignation is the UK’s unfair policies towards Scotland.

SNP believed that UK’s policies are framed by the English, and are focused to serve the people of England only, without contemplating proportional share of the Scotland in terms of the revenue it generates through tax collection and the population it has. Furthermore, currently the North Sea Oil revenue is funnel to London and finances spending through the UK. However, most of the oil lies in the water, within Scotland’s existing maritime boundaries, and SNP rightly believes that it would be better if spent on Scottish people.

SNP’s henchmen were also disgruntled in the most recent general election since only one Conservative Party member was elected in Scotland. They wanted the Scottish parliament to have more power and influence and that was feasible only if they had an independent Scotland.

“I’ve always been hopeful about Scotland’s prospects. And I now believe more than ever that Scotland is within touching distance of achieving independence and equality.”

Argument in favour of ‘No’

On the flip side of the coin, those who vigorously shouted ‘No’ in this referendum, proclaimed that being affiliated with the UK gives Scotland an influential right to have their say in world affairs through major alliances such as the European Union and NATO. They promulgate that a round-the-clock union will fetch more jobs, stronger financial services, and continued use of the British pound and a tradition of partnership that goes back three centuries.

Alistair Darling, chair of the pro-union Better Together campaign claimed,

“If we vote to leave the UK on Thursday, then there’s no going back, it’s not like an election where you can change your mind if things don’t work out”.

Of course, UK could never even dream of watching Scotland tear apart from the kingdom’s political body. As David Cameron said,

“I think there has been a very strong message from the rest of the United Kingdom that we want (Scotland) to stay (in the Union)”.

How United States was pursuing the referendum

What was steaming in Washington before the final verdict of the referendum? What implication was this referendum expected to establish towards UK’s relationship with United States?

To me, it seemed a remote chance that the propinquity of these two cronies (UK and US) will be negatively impinged by the outcome of the referendum. However, Obama administration was assiduous though, that the US nuclear submarines were based about 20 miles outside of Glasgow, which are leased to England, forming the backbone of the UK’s nuclear deterrence. And since Scotland disdained the US base being there near Glasgow, therefore it would have been a matter of grave concern for the US if Scotland were to triumph leeway in the end.

Implication of voting ‘No’

So, things gets back to life and the show must go on for Scots to function under the umbrella of United Kingdom. David Cameron, in his speech after the verdict of the referendum, thanked Scotland for not scotching the old trusted union and pledged his promise of the devolution of further powers to Scotland’s Parliament.

Now it’s imperative to question David Cameron and Westminster, as to what new powers will be devaluated to Scotland? And more importantly, when? What if British prime minister’s promises are not consummated? Will we witness another referendum?

Will Scottish people pay lesser taxes than the English now? What benefits will be bestowed to the Scottish public? Will there be any change in power of the Scottish members of parliament, to vote in English matters? And last but not least, after this referendum, will there be any shift in England’s relationship with Scotland?

Time is the best healer to answer all these questions. Let’s wait for what’s to come next.

A finance manager at a corporate entity in Kabul. Also, a freelancer writer. Dreams of a stronger, enlightened and modernised Pakistan. He tweets as @Ammad_Azeem (twitter.com/Ammad_Azeem)

Will Ashraf Ghani be able to restore ties between Afghanistan and Pakistan?

How Hollywood reacts to Gaza: Welcome to the dark side